I am unable to understand this formula intuitively.

About $8\%$ of the world's population have blue eyes. Assuming there are $7.5$ billion people on this planet, that's six hundred million people with blue eyes.

About one in ten is left-handed. That makes $750$ million left-handed people.

Here is the core of why your formula is true:

Assuming that eye color and hand preference are independent, you would expect that just as a tenth of the whole population is left-handed, a tenth of all blue eyed people are left-handed.

Imagine rolling a die and flipping a coin. These are independent events - neither affects the other. You can show all the possible outcomes in a unit square in which the area of each region shows its probability. Then the product rule for independent events makes sense. The darker shaded region has area $$ \frac{1}{2} \times \frac{1}{6} = \frac{1}{12} $$ for the probability that you toss a head and roll a four. 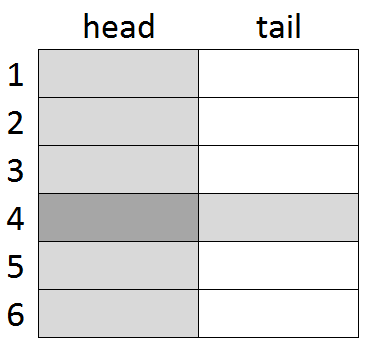 (This is NOT a proof - it's a device that may aid your intuition.)

You can find a thorough description on https://economictheoryblog.com/2012/12/26/stochastic-independence-versus-stochastic-dependence. The article describes the intuition behind P(A and B) = P(A) · P(B) and explains the difference between stochastic dependence and stochastic independence.

If, for example, $P(A) = 1/4$, then event $A$ accounts for a quarter of all possible outcomes (weighted by probability).

If we restrict attention just to those outcomes corresponding to event $B$, then if $A$ and $B$ are independent we would expect $A$ to still account for a quarter of the outcomes: that is,

the same argument should apply no matter what $P(A)$ is; i.e.

Independence means that $A$ has nothing to do with $B$, which means that if someone tells you that $B$ happened, you have no way of concluding anything at all about $A$. That means $$P(A \text{ and } B)/P(B) = P(A).$$ which rearranges to the desired equality. (The left hand side measures the probability that $A$ holds in a world where $B$ is known to hold.)

Briefly: Clearly a logical "and" operation is harder to have happen than either of the events on their own. For probabilities between 0 and 1, what basic arithmetic operation produces a lower result than either of the operands, without possibly going below 0? Only multiplication.

Saying "N events are independent" and "the probability of all of them happening is the multiplication of the probabilities of each" mean the same thing.

Not the answer you're looking for? Browse other questions tagged probability intuition or ask your own question.

-3
Connection of independent, depended, mutually exclusive, and mutually events
1
How to argue independence of random variables