I try to answer the following question from Basic Set Theory by Shen and Vereshchagin : 1. (a).Prove that any family of disjoint 8-signs on the plane is countable.(By an 8-sign we mean a union of two tangent circles of any size; the interior part of the circles is not included). (b)Prove a similar statement for letters T or E on the plane(but not M or O!).

A good place to start is to ask yourself what the difference between the shapes of 8, T, and E on the one hand and M and O on the other. One thing that stands out is that each of 8, T, and E has a point that does not have a neighborhood that looks like a line segment: 8 has the point of tangency of the two circles, T has the intersection of the two straight lines, and E has the intersection of the vertical line and the middle horizontal line. (The other two horizontal lines of the E) can be straightened out so that it looks like $\vdash$. The M, on the other hand, can be straightened out into a line segment, and each point of the O looks like a point on C if you look at it up close, so it also looks like it’s on a line segment.

I would start by trying to show that a collection of pairwise disjoint T’s in the plane must be countable: they’re simpler than the 8, but every 8 contains a (slightly deformed) T, so if you can do it for T’s, you’ve basically done it for 8’s.

Suppose that $\mathscr{T}$ is an uncountable collection of pairwise disjoint T’s in the plane. For each $T\in\mathscr{T}$ there are rational numbers $p_T,q_T$, and $r_T$ with $r_T>0$ such that if $C_T$ is the circle of radius $r_T$ centred at $\langle p_T,q_T\rangle$, then the intersection point of $T$ is inside $C_T$, and the three endpoints of $T$ are outside $C_T$. There are only countably many triples of rational numbers, so there must be some $p,q,r\in\Bbb Q$ such that

Now trim the ends of each $T\in\mathscr{T}_0$ so that the three segments terminate exactly on the circle $C_T$; you now have a circle $C_T$ divided into three regions by the $T$ inside it. (If you bend the top bar of $T$ at the intersection point, this circle-with-T will look something like the Mercedes-Benz symbol.) Each of the regions must contain a point whose coordinates are both rational; call these points $x_T,y_T$, and $z_T$. There must be some $x,y,z\in\Bbb Q^2$ such that 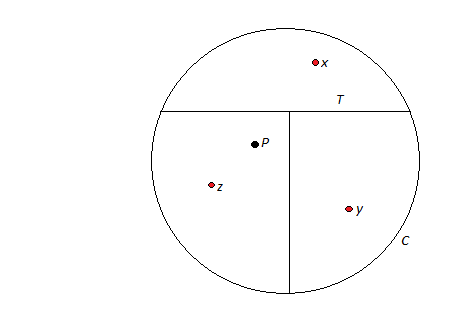 Hint for a: there is an element of $\mathbb {Q \times Q}$ in the interior of each 8. For b the idea is the same, prove you can't pack them arbitrarily closely, while for M and O you can fill a line segment with each point corresponding to a different letter.

The following argument deals with the original question (a) about figure eights.

I asked the same question today on MO: https://mathoverflow.net/questions/371669/fundamental-group-and-countability and someone there gave the link to this thread.

I had an idea involving $p$-adic integers:

First let's consider one of the two loops defing the 8-sign, say the upper one, and consider its area equals 1. We'll put smallest 8-signs, all included in this same upper loop and with disjoint interiors of respective area at least $A$ with $0<A<1$. We can make it dimensionless saying it is the ratio of the minimal area of the interior of some 8-sign to the area of the "mother" loop. One can pack a finite number $N(A)$ of 8-signs of disjoint interiors of area at least $A$ into it. Let $p(A)$ the smallest prime greater or equal to $N(A)$. The iteration of this process inside each upper loop at each level shows the number thereof is upper bounded by $\sum_{i=1}^{\infty}p(A)^i$ which is countably infinite: it boils down to counting the number of $1$ in $1+(1+1+...+1)+(1+1+...+1)+...$, the $k$-th pair of parentheses containing a number of $1$ equal to $p^{k}$. This is an upper bound for the number of upper loops: to get an upper bound for the number of $8$ signs at each step, just replace $N(A)$ by $2N(A)$ and $p(A)$ by the smallest prime greater or equal to $2N(A)$, that we'll denote by $q(A)$. The same reasoning applies mutatis mutandis, and we end up with countably many 8-signs in any region of the plane where you can draw an 8-sign.

1
Find the number of different sets C such that $B\subset C\subset A$
2
A collection of pairwise disjoint open intervals must be countable
5
Partition of plane into disjoint circumferences
1
Partitioning any set into a countable union of countable sets
1
Use of the axiom of choice in exercise on cardinal multiplication
0
On the General form of the Cantor's Theorem
3
Show disjoint $\theta$-sets in the plane is countable.
1
Prove that for any family of sets $\mathcal F$, $\bigcup!\mathcal F=\bigcup\mathcal F$ iff $\mathcal F$ is pairwise disjoint.
0
Is the family of all finite union of difference of sets equal to the family of all finite union of difference of of the former family?