I was solving an easy problem for fun when I stumbled onto this, and was wondering if this was a correct and possibly a new proof of the Pythagorean Theorem.

Now look at this picture: 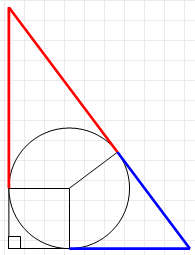 It is important to state the axiomatic framework the OP is coming from. It appears that they are working within the confines of 'Euclidean Plane Geometry' (a.k.a. high school plane geometry), and not the $\mathbb R \times \mathbb R$ Cartesian Coordinate Space.

The OP's proof is completely valid in that setting, and if carefully argued there is no circular reasoning.

The next section is just for fun.

Another title for the OP's question:

New Proof of Pythagorean Theorem (using the incenter of a triangle)?

(they can erase the picture of the circle).

The OP's proof doesn't rely on the concept of a circle or tangential distances.

A Theory of (tick-marked) Ray Lines could be postulated that describes the plane, and using the OP's logic, the simultaneous truth of the two equations

You will find the two-dimensional Pythagorean Theorem to be true if you believe in the following:

With that under your belt, you prove the following:

Theorem 1: Concurrency of Angle Bisectors of a Triangle.
In a triangle, the angle bisectors intersect at a point that is equidistant from the sides of the triangle; this point is called the incenter of the triangle.

If want to feel more comfortable before throwing out your Compass-and-Straightedge, please read

How to Bisect an Angle Using Only a Ruler

" By the property of tangential distances, we know that: "

And how do we know anything about the property of tangential distances?

We derived it from the Pythagorean Theorem.

I'm afraid your proof is circular.

Not the answer you're looking for? Browse other questions tagged geometry proof-verification proof-writing circles or ask your own question.

2
Is this proof of the Pythagorean theorem known?

10
Four kissing circles
2
Suppose we have an inscribed isosceles triangle in a circle.
6
Inscribed circle in a right-angled triangle
2
$\dfrac 1r+\dfrac 1R=\dfrac 1g+\dfrac 1G$ about incircles and excircles
2
A circle of radius $r$ is inscribed into a triangle.
3
What is the average area of all triangles that can be inscribed in a unit circle?
0
Circumcentre of triangle question. Given ratios of areas, find ratios of lengths.
0
Proof of Inscribed circle in Right angle triangle
0
Given a circle $(O, R)$ and a chord $AB=2a$. If $CA,CB$ tangents to it, then what is the area of $\triangle ABC$ equal to, with respect to a and R?