I have a situation where I am trying to calculate a leading shot for a character in a 2D top down game. The enemy character moves with a certain speed $s$, which is applied to its normalized direction vector each game tick--so the game ticks are discrete units of "time" as opposed to actual time.

I need to somehow calculate $\theta$, the angle I need to shoot the bullet in order to hit the enemy character...the unknowns are: $t$, $\theta$, and the third angle.

Can't remember how to do this.

Here is a picture of the situation: 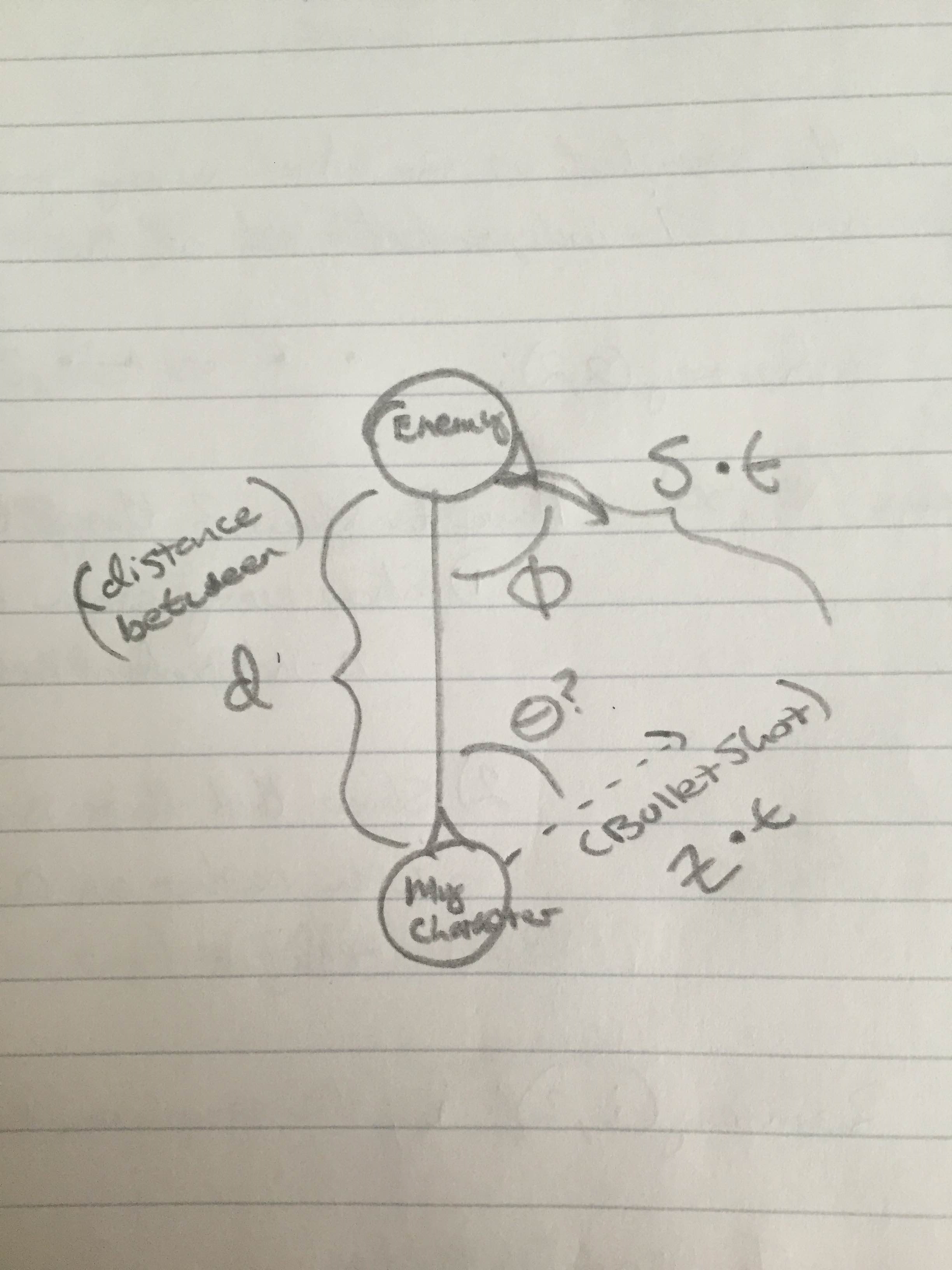 After seeing the answer above, I was able to mostly solve the problem. There was an issue, however, in that the sign of $\theta$ is always positive when you actually go through the whole solution--calculating the vectors, then $\phi$, then $\theta$ using the law of sines.

So the issue is: which side of the character face vector is the enemy direction vector (assuming the character is facing the enemy). There doesn't seem to be a trivial way to figure this out, given two arbitrary vectors, using the tools a computer has.

The simplest, most straight forward way that I found to accomplish this--without any kind of logic or pattern recognition--was to just use the sign of the determinant of the two vectors--so $\operatorname{sign}(x_1*y_2 - y_1*x_2)$. The asymmetry gives you a left and right with only 2 multiplies and a subtraction (important when you are in a game loop that is doing 120 fps).

Anyhow, here is how it worked out:

In order to calculate $\phi$ in the drawing above, I used the dot product:

Having solved for $\phi$ by taking the $\operatorname{arccos}$ of the dot product result, I calculated $\theta$ in the drawing above with the law of sines,

So, in order to recapture the "sign" of the angle, I think that what you need is the sign of the determinant of the two vectors (did not find an authority or proof...just thought about it and tested).

Will give you back the "sign" of the angle.

Not the answer you're looking for? Browse other questions tagged algebra-precalculus geometry trigonometry triangles or ask your own question.

0
Shooting a projectile in a 2d-space
1
Projectile Motion
3
Computing the trajectory of an orbiting body so that it collides with another orbiting body
3
Finding the angle of a moving target
2
The puzzle of billiard geometry
4
Using trigonometry to predict future position
0
getting an angle with respect to distance
0
How to know 2 unknown variables using 2 equations?