So, I'd like to color the pentagonal hexecontahedron in a way that is satisfying aesthetically and mathematically. For me this equates to, in order of priority - 1. No same-colored faces can share an edge 2. We must use as few colors as possible 3. We must have as much symmetry as possible

Here's a 5-colored pentagonal hexecontahedron - 5 colors is a lot, but it's nice that there are apparently no adjacent faces with the same color. Not clearly very symmetrical though (if it is, it's obscured by the large number of colors).

By the four-color theorem, we know it can be done with 4. I know it can't be done with 3, proof below. So, the aesthetics question boils down to "how symmetrical a 4-coloring can we make?".

By the way, it is possible to color the deltoid hexecontahedron with only three colors, without same colored faces touching, and with chiral octahedral symmetry. Here's a lovely piece of origami designed by Tomoko Fuse that does this.

Answer this question and you will be credited in a documentary about virus structure! I'm coloring a Satellite Tobacco Mosaic Virus

EDIT so the origami one I show is actually quite symmetrical! But still not hugely useable since you (I) have to stare at it for a while to see it. 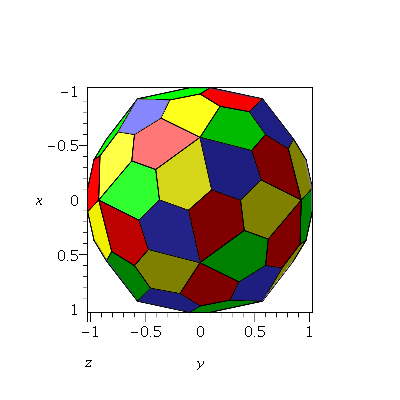 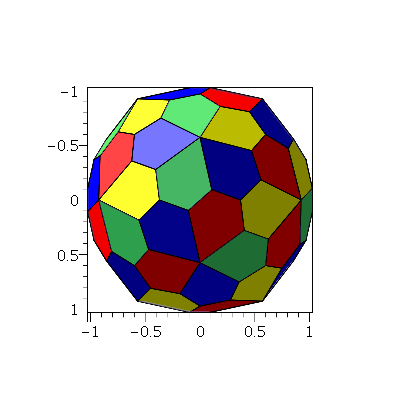 For convenience, here is a list of vertices with xyz coordinates, and here is a list giving the vertex numbers of each face and the colour of the face.

A much more symmetrical solution! It is "choice 3" in the scheme below 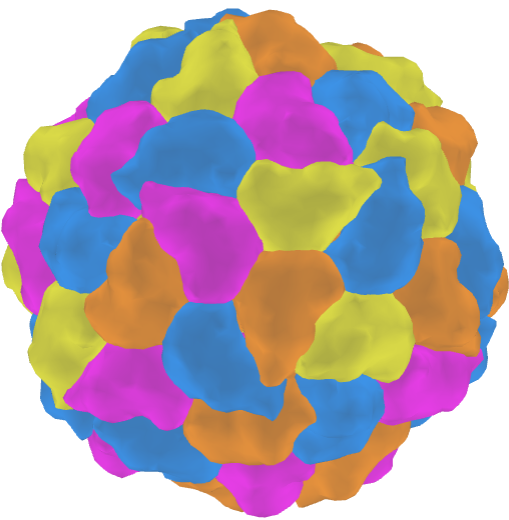 Here is how this was deduced:

(1) If you are looking for nontrivial symmetries in S that preserve a coloring of a PH, there are none, as any rotation swaps some two adjacent faces which would then have to have the same color.

(2) If you are looking for nontrivial symmetries in S that permute a 4-coloring of a PH, you can probably find them with trial and error... you don't have to consider 5-order symmetries as 5 is prime and larger than 4.

(3) More interesting is what I think you are looking for: a 4-coloring of a PH whose group G of symmetries that permute its colors are transitive (that is, for any pair of colors there is a symmetry in S that swaps those two colors). So G is a subgroup of S: we can see the subgroups of S here: https://en.wikipedia.org/wiki/File:Chiral_icosahedral_subgroup_tree.png But G is also a group of permutations of four colors, so can be viewed as a subgroup of S4 https://en.wikiversity.org/wiki/Symmetric_group_S4 This is our leverage to getting information about G.

There are 7 subgroups of S4 of order 4. Three of them are isomorphic to Z4, and Z4 does not appear as a subgroup of S (S has no 4-rotations) so we only need to consider the four isomorphic to V (the Klein four group). The first three are identical (up to internal automorphisms of S4) so really we are only considering two different cases where G has order 4.

In the first case, G is isomorphic to V and contains a transposition (that is, an element that swaps some two colors A and B while preserving colors C and D). PH has 60 faces, and any 2-rotation groups those 60 faces into 30 pairs which are swapped under rotation. For a rotation to preserve a color under swapping, that color must appear on an even number of faces. But A, B, C, and D all appear on the same number of faces (as they are permuted transitively), which must be 60 / 4 = 15. This is impossible, so G contains no transpositions.

Anyhow, I don't know from here how to determine if there is a 4-coloring of PH such that its group G of symmetries that permute the colors is the group described. Such a group G is generated by two elements s and t, each of which is a 2-rotation around some axis. There are 5 ways of choosing a pair of 2-axis in S up to rotations in S (which I figured out by staring at this for a while: https://en.wikipedia.org/wiki/Icosahedral_symmetry#/media/File:Sphere_symmetry_group_i.png ). For each such pair of elements s and t one can search for a 4-coloring that satisfies all the necessary constraints. I imagine most of the possibilities can be eliminated quickly through trial and error because the constraints really restrict the possible ways to color it a lot.

I went ahead and looked for 4-colorings that have their colors permuted in 12 different ways (i.e. have A4 or tetrahedal symmetry), which is the most possible (recall I argued G can either have 4 or 12 elements). In fact, if I haven't made any mistakes, there are exactly 4 such colorings! So there do exist highly symmetric 4-colorings of the PH.

I'll try and give a written procedure. First G = A4 appears 4 different ways inside of S so you need to choose which one you will use for the symmetries of your coloring. (There are four ways you can put a tetrahedron inside of a PH so that the symmetries of the tetrahedron are also symmetries of the PH.) It will have 3 axes of 2-rotation, all perpendicular to each other, and 4 axes of 3-rotation, cutting diagonally with respect to the 2-rotation axes. We will ignore all other rotation axes during this discussion, we are only interested in rotation axes for elements of G.

First we color every face which is touching a 2-axis as follows. For each such face F1, find the face F3 that is touching a 3-axis that shares a vertex but not an edge with F1. Give F1 the color preserved by that 3-axis.

Now we color each set of 5 faces which share a vertex. Going around clockwise call the faces F1, F2, F3, F4, F5 where F1 touches a 2-axis and F3 and F5 touch a 3-axis. (If this is not possible then your PH is flipped relative to mine so use anticlockwise.) Let A be the color fixed by the axis touching F3. Let C be the color fixed by the axis touching F5. Let B the color of the face sharing an edge with F1 that is already colored in the last step. (It is the color that the axis touching F1 sends A to.) Let D be the other color. Then, depending on which of the four colorings you are doing, the colors of F1 through F5 are: Choice 1. A-D-B-A-D Choice 2. A-C-D-A-D Choice 3. A-C-D-C-D Choice 4. A-C-D-C-B

Not the answer you're looking for? Browse other questions tagged combinatorics coloring polyhedra biology or ask your own question.

4
Coloring dodecahedron
2
Is there an unbiased random walk on a colored plane for any number of colors?
0
Combinatorics (coloring)
2
Coloring a triangular bipyramid
2
Truncated objects coloring
2
Burnside's lemma applied on a pyramid
4
Coloring A Snub Cube With Restrictions
2
Combinatorics problem (coloring squares)