Constructibility of the 17-gon

Comment: I greatly shortened and simplified the question. As a drawback, some comments/answers might not make any sense anymore.

Assume we are using this set of axioms $A$ for plane euclidean geometry and some sensible definition of the length $\overline{ab}$ between two points $a$ and $b$. Then we can define the set $R$ to be a regular n-gon iff

Comment: The linked construction is one by Herbert William Richmond which I found here, but my question would be the same for any other known construction which does the same job. The origins of the construction are of algebraic nature. Independantly of the origin, I want to know if the answer to my question is positiv, negative or not known.

Disclaimers (6 November 2020): I deleted this post a few years ago but it was recently undeleted by three other users. It has been pointed out to me that authors don't "own" their material after it is posted here, and so I will bow to the will of the community and leave the post undeleted, but I would like to add a few remarks.

Further addition (21-24 January 2018): This may be well-known to you, but in case not, here's a geometric construction, with proof, of the roots of a certain type of "quadratic equation". (Gauss's method involves repeated solution of this type of quadratic equation.) I've added below some diagrams showing some of the Gaussian periods, in the hope that this will make clear that they can be defined and their properties proved by geometric methods. There are still many details that would need to be filled in, however. 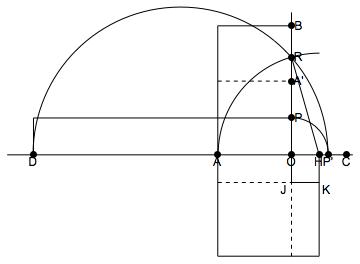 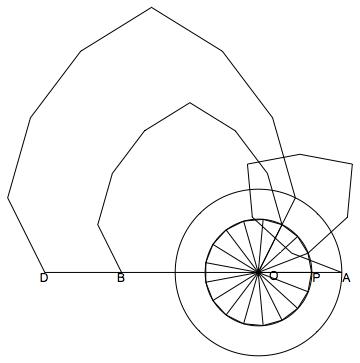 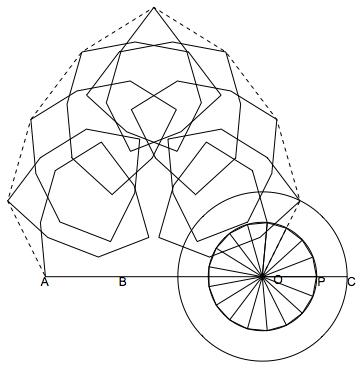 As I said, I am happy to elaborate further if needed. I am beginning to suspect, however, that I do not grasp what the sticking point really is. To try to understand, I went back and read the early versions of the original post. It seems that there is some objection to proofs that construct the regular $n$-gon by constructing the length $\cos(2\pi/n)$. I do not understand what the objection is, as long as this length is defined in purely geometric terms.

In Version 1 of the original post, I also find the following, somewhat mysterious statement

A week later, someone in the class did find a solution by geometric reasoning, which used the fact that the exercice is implicitly saying that the regular 5-gon is constructable.

It's probably a failure of imagination on my part, but I find it hard to see how the assumption of constructibility of the regular $5$-gon could help in its construction. On the other hand, the kind of proof I have in mind works most simply if one assumes existence of the regular $5$-gon. Is it possible that you meant to say that existence was assumed, and not constructibility? Here's a possible logical structure for a proof: given a regular $n$-gon, identify a line segment from which the $n$-gon can be constructed and prove some properties of that line segment. Then provide a construction of a line segment satisfying those properties, and prove that the line segment constructed is the unique solution to the problem. Is there some objection to this kind of proof? (Not to imply that I think the proof has to follow this structure, but it makes things a lot simpler.)

Added (2 October 2016): Perhaps my original answer was too non-specific to be useful. I think the question comes down to that of whether there is some difference between the $5$-gon and $17$-gon such that the $5$-gon can be constructed with geometry alone, but the $17$-gon needs algebra.

Terms such as $\cos\frac{2\pi}{n}$, $\cos\frac{4\pi}{n}$, and so on would not have been in Euclid's vocabulary. Nor would the concepts of negative or complex numbers. In fact, Euclid would not have accepted the idea of associating numbers with lengths, areas, or angles. Numbers for Euclid were $2$, $3$, $4$, ... Euclid did, however, make use of Eudoxus's sophisticated theory of proportion, which, when applied to magnitudes, including lengths, would have allowed him to perform manipulations equivalent in many ways to our own.

So Euclid could have understood $\cos\frac{2\pi}{n}$, $\cos\frac{4\pi}{n}$, and the like as line segments obtained by orthogonal projection of different radii of the regular $n$-gon (of radius $1$) onto an axis through one of its vertices. Since the Greeks didn't recognize negative magnitudes, that some of these cosines are negative would have to have been handled by a, perhaps cumbersome, case analysis.

Gauss's method, applied to the constructibility of the pentagon, seems to hinge on two facts:

The computation of Fact 2 can be carried out geometrically using standard quadrature methods of Greek geometry. I don't know of any evidence that Greeks of Euclid's era solved this problem in generality, or even thought about it, but it is clear that the tools were present, and that one could provide a construction and a demonstration that would satisfy them, if required.

Proving that their product is $-\frac{1}{4}$ is easy algebraically: express both cosines in terms of fifth roots of unity and fully expand the product. This calculation makes use of three ingredients, (1) complex multiplication, (2) complex addition, and (3) the distributive law. One could define complex multiplication geometrically in terms of angle addition and rescaling of line segments, both of which can be carried out geometrically. (That the rescaling can be carried out using compass and straightedge was emphasized by Descartes in his development of analytic geometry, but I don't think would have been a surprise to the Greeks at all.) Complex addition can clearly be defined geometrically as well. Proving the distributive law shouldn't present any conceptual difficulties: it will make use of properties of similar triangles.

If one accepts all of the foregoing, the question becomes whether there is anything different in principle about the $17$-gon. The main difference that I see is that it is no longer the sum and product of two cosines that are known magnitudes, but rather the sum and product of magnitudes equal to sums of four cosines. But these sums of four cosines can be understood geometrically as particular line segments related to the $17$-gon. Sums and products of these can be understood geometrically, exactly as for the $5$-gon. One then has to repeat the process two more times, first on magnitudes equal to sums of two cosines, and finally on single cosines.

Once it has been established that the sum and product of certain unknown magnitudes equal certain known magnitudes, one may then proceed to construct the unknown magnitudes. This ultimately produces all of the cosines for the $17$-gon, again understood as particular line segments.

Original answer (11 August 2016): Given a unit of length and segments of various lengths, one can, using compass and straightedge, construct sums, differences, products, quotients, and square roots of lengths. This was emphasized by Descartes, but all the techniques involved were known to and used by the ancient Greeks.

Given the unit circle in the complex plane, the regular $n$-gon inscribed in the circle can be constructed if we can construct the length $\cos(2\pi/n)$. (Complex numbers, which were unknown to the ancient Greeks, are introduced only for convenience and are not essential.) For we can then construct the point in the complex plane corresponding to the number $\cos(2\pi/n)$, and, by constructing a perpendicular to the real axis at this point, the point $\omega=e^{2\pi/n}$. The complex numbers $1$, $\omega$, ... $\omega^{n-1}$ can then be constructed by repeating the procedure, and form a regular $n$-gon.

Of course this is not a nice proof, since there's a lot of brute-force translation of arithmetic into geometry. (The construction itself is far simpler than the proof that the construction has the desired properties.) The proof (and also the construction) can be streamlined, but I don't see anything in the foregoing that requires the use of axioms beyond those of Euclid.

A few days ago I stumbled on the GeoCoq Project, which is a project on the formalization of geometry in the proof-assistant Coq. I contacted one of the people involved (Julien Narboux) in the hopes he could finally provide an answer to this question. He kindly replied to me and sure enough, I think the quesion is at last settled for me.

For some context I will first give the essential content of my mail and then his answer.

Me: This question came to my mind when I was taking a lecture on algebra, in which we showed the standart result by Gauss, which states the constructibility of the 17-gon. My still prevailing gut feeling is that, since this was done using complex numbers, it only establishes that the statment holds in one model of euclidean geometry, which shows its satisfiability but says nothing more concerning the provability.

Julian: You are right, when doing a proof using algebraic means per se, you only prove that the statement is true in the Cartesian plane over some field, you show that the statements holds in one model of the axioms.

To transfer the result to any model, you need a meta-theoretical result about the models of your axiom system. This is the main result of both Tarski and Hilbert’s books (Foundations of Geometry, and Metamatematische Methoden in der Geometrie).

Starting from Hilbert axioms, Hilbert’s defines (following Descartes; addition and multiplication by geometric means, and then shows he has a field). As soon as you have a field, you can define coordinates (by projecting on two perpendicular lines). Then one can prove by geometric means that the characterization of geometric predicates by algebraic equations is correct. This is the definition of the Cartesian plane over a field.

So in principle yes, an algebraic proof of the constructibility of some statement can be transferred into a purely synthetic proof using Hilbert axioms. But if you "unfold" the geometric definitions of the operators in the algebraic proof then you would obtain an enormous construction. For the 17-gon, I guess it would be possible to prove that the construction you cite is ok by algebraic means, and checking this proof in Coq would give you an actual proof from the Hilbert and Tarski’s axioms.

We have done this for the 9 points theorem (line 1531 of following Code). We prove it automatically using groaner basis, but we use our proof that we can define algebra inside geometry, to obtain a proof which is valid from Tarski’s axioms (we have shown that Tarski’s and Hilbert’s axioms, excluding continuity, are equivalent).

All of this is explained in the following papers:

TL;DR Some meta-theorems about the proof systems indeed guarantee us the provability when we can provide algebraic constructions.

Not the answer you're looking for? Browse other questions tagged geometry field-theory euclidean-geometry polygons or ask your own question.

1
Repeating an operation infinitely makes any convex $n$-gon a regular $n$-gon?
2
What is $\left(\overline{\mathbb{C}(t)}\right)^{\times}$?
1
Number of triangles containing the center of regular 13-gon
0
Drawing of a regular heptadecagon
2
Equilateral and almost equiangular polygons in 3D
3
Visualizing the set of points in a regular polygon closer to center than to vrtices (Voronoi cell)?
4
Prove that in a $4n$-gon, every other diagonal passes through a common point