Let $\Omega \subset \mathbb{C}$ be right half-plane, with the disc $D$ removed, where $D$ is the disk of radius $r=3$ centered at $z_0=5$. What is the maximum number of disjoint open disks in $\Omega$ whose boundary touch both boundary components of $\Omega$?

This is a question I had on my qualifying exam years ago; I couldn't solve it then, and today I stumbled upon it again and it nags me that I can't find a solution. Or at least, one without using any table or any map that I couldn't come up with on my own during an exam.

What I did (then and now) is to transform conformally the right half plane into the unit circle, and then see where the disk $D$ is mapped. Then my idea was to count the number of circles in this scenario. If the circles are not those coming from vertical lines in the right half plane, then they will come from circles in the original domain $\Omega$ (a simple test for a circle not to be a "bad" circle, is not to be centered on the real line, for example).

Now, I don't know how many disjoint circles touching both boundary components of $f(\Omega)$ I can fit in it, nor do I know how to guarantee that the answer is invariant under $f^{-1}$.

As already said in the comments, it is useful to map $\Omega$ with Möbius transformation $T$ to an annulus between two concentric circles, and we can assume that annulus is centered around $w=0$.

Some geometric observations help to find such a transformation $T$. Let $a$ and $b$ be the pre-images of $\infty$ and $0$, respectively.

Disks touching both boundary components of $\Omega$ are mapped by $T$ to disks touching both inner and outer circle of the annulus. These image disks must have radius one and a center on $|w| = 2$. It is now easy to see that there can be at most six of them, compare Wikipedia: Steiner chain (link provided by @ccorn in a comment) or Wolfram World: Steiner chain. 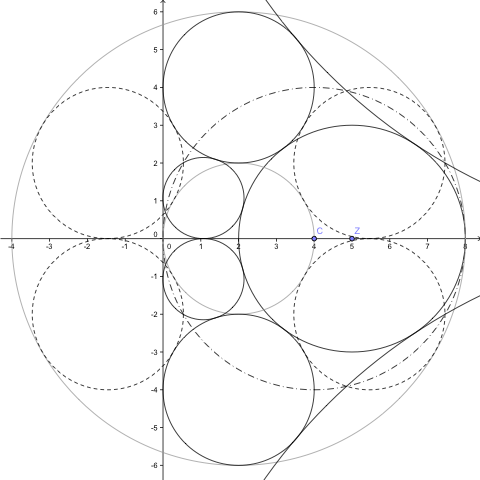 Note that the contents of the annulus could be rotated and still yield valid solution circles under the inverse transform, with one exception: No dashed circle shall touch the inversion center $c$, otherwise it maps back to a (vertical) line which does not touch the $y$-axis (in $\mathbb{C}$, that is).

Not the answer you're looking for? Browse other questions tagged complex-analysis conformal-geometry mobius-transformation or ask your own question.

1
How to find the hyperbolic center of a circle in the complex plane?