I'm taking an 'Intro to Higher Mathematics'-type course right now, were we learn about basic set theory, number theory, algebra, etc. and I had the following thought:

Say you're trying to solve a problem in some mathematical field $A$, you have objects $a$ and $b$ within theory $A$. You realize that objects $c$ and $d$ in the field $B$ are similar to objects $a$ and $b$, and that your problem is easier to solve in field $B$. Is there a way to make $a \equiv c$ and $b \equiv d$ so that you can go back and forth between $A$ and $B$, being sure that whatever it is that you did in $B$ is also valid in $A$, and viceversa?

Maybe an example would make what I'm trying to say clearer. (I'm still learning the basics, I'm aware that my knowledge is very limited, so excuse me if my choice of examples is not very good.)

Now, let's say I want to make this into a directed graph, so let the set of vertices be all the elements of $A$ so that $V=A$ and the set of arcs be the equivalence relation on $A$ such that $E=R$. We have the following graph: 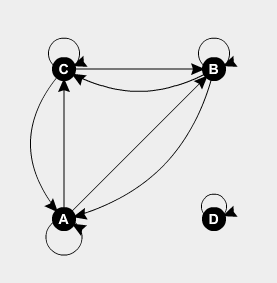 Now, let its adjacency matrix be

As we can see, we now have three different ways to approach the same object; now, suppose I want to do something with the initial relation, maybe solve some problem or exercise, my question is: up to what point can I use theorems or results in Graph Theory or Linear Algebra/Matrix Theory to help me solve the problem?

I know that perhaps my example is very shoddy, but my question is more in general: given some equivalence between some mathematical objects in different theories, is there a way to systematize all the things that I can and cannot do in one theory that preserve the equivalence between the objects I'm using?

E.g, in my previous example, say I operate exclusively on the adjacency matrix of the graph to try to solve my problem; maybe there's some theorem or proposition that makes my problem easier in Linear Algebra than in Set Theory, how can I prove that whatever result I get on the matrix is equivalent to the result I would get working on the sets alone?

To try to summarize, what I'm asking is:

As was pointed out in the comments, what you are talking about it ubiquitous in certain parts of mathematics. As far as I know, there is no algorithmic process that allows you to determine this. What you can and cannot do would depend on the problem. In fact, figuring out when such things are possible and exploiting the interplay, I would say, is a hallmark of modern mathematics. The sort of equivalence you want to have, I think, is too general. You would need to pick what question you want to answer and see if you can use a sufficient notion of equivalence.

Here are some examples that I'm aware of.

Symbolic Dynamics: We can associate certain dynamical systems (think about a light that changes its color every second between 10 different colors) to symbolic dynamical systems (think of infinite sequences of base 10. There is a nice way of associating these two things together: Assign a digit to each color, and the color it changes to each time is the next term in the sequences) which are better understood/where we have a lot of techniques that are well developed for handling a wide variety of questions. In general, depending on the way the association is established, different things are possible, but the key idea is what you highlighted. How fine a result you can obtain will be dependent on how good the association between the system you set up was.

Category Theory: This area has many connections to what you are talking about, and in some sense, is a framework that gives you a very convenient language for talking about such things. Categories have objects, and morphisms, which are maps between the objects you have. You use functors that take objects in one category to another and preserves the morphisms in some useful way.

Let me use the above to illustrate why your general question is tricky. I'm going to be hand-wavy, but I hope that I get the idea across. Suppose that you work with topological spaces. So you have enough structure on your space to talk about what a continuous function is. Now your objects are topological spaces and the morphisms are homeomorphisms. You can take your topological space to a set that looks exactly like the same set through the use of a functor. And you say, hey, I'm going to forget about all the topological structure and only remember what the set looks like. This is an example of what is called a forgetful functor. It seems like a useless idea in this setting: There is nothing to be used, you just forgot everything about your space that is interesting.

So why give you something that looks useless? The point is that you use forgetful functors in algebraic topology too!!! Only, now they are less forgetful; they remember enough to be useful but forgets enough that we can handle them more easily.

To reiterate: There is no "one size fits all" solution (at least non is known and I'm a 100% that we won't ever find one). You need to break down the problem and figure out what techniques, results from other areas you may be able to use and whether you can set up a strong enough notion of relations between the structures to get the result you want.

Your ideas are very interesting and, more importantly, fruitful. There may be various ways to interpret and implement what you are proposing, but I will describe only one of them.

One implementation of this is the transfer theorem of Robinson's framework for analysis with infinitesimals. Here we notice that whatever we want to do over the reals: sets, functions, or more complicated objects, can be formalized in a first-order theory. The transfer theorem asserts that the natural extensions of all those things still satisfy the same rules, formulas, etc. as the original objects over the reals. For example, the relation $\sin^2 x +\cos^2 x=1$ continues to hold for all hyperreal inputs, including infinitesimal and infinite $x$. Each function has a natural hyperreal extension which allows one to define the derivative by using a ratio of differentials as Leibniz did. For more details see questions under the tag nonstandard-analysis.

I would definitely say that Category Theory was invented to explore exactly the sort of thing you're asking about. The tricky part is that if the objects in question are similar but not identical (unlike in your example, where you have literally given different representations of the exact same object), then the analog is not perfect, and some things you know about objects $a$ and $b$ may not have analogs or even be meaningful for $c$ and $d$. (In category theory, one deals with forgetful functors between categories, which capture this concept in a general way).

Not the answer you're looking for? Browse other questions tagged soft-question model-theory foundations or ask your own question.