Visual representation of the fact that there are more irrational than rational numbers.

Would anybody know of a visual or even (preferably) geometric representation of this?

To make it more specific: Text, symbols and written numbers are predominantly used as labels, and and less to represent the (ir)rationals themselves, or relations between the two groups. Like, if you need an image or a picture for your answer, that's probably it.

It does not have to be a rigorous proof, just a visual approach—if possible.

At the same time, a (somewhat elementary) explanation of why it does not make sense to try to visualize this relation (geometrically) is just as welcome.

The rationals can be mapped into the lattice points $(n, m)$, which are an infinite set of isolated points in the plane.

The irrationals, by any of the standard ways of mapping two reals into one (such as zipping the digits of a pair of reals) fill the whole plane (with quibbles about two representations or points missed being disregarded).

But you can repeat this argument for tinier and tinier values of $\epsilon$, approaching zero.

So the total length of the rationals is zero.

Thus, there are more irrationals than rationals.

Now this argument may sound fishy, but it turns out to be completely rigorous. Once you have developed the Lebesgue measure of the real line, substitute the phrase "Lebesgue measure" for "length", and you've got a proof.

If we make a rectangular grid with integer coordinates, it's possible to assign a unique angle to any rational number, using the definition $\tan \phi=y/x$ for $\phi \in (-\pi/2, \pi/2)$.

For positive rationals it would look something like this: 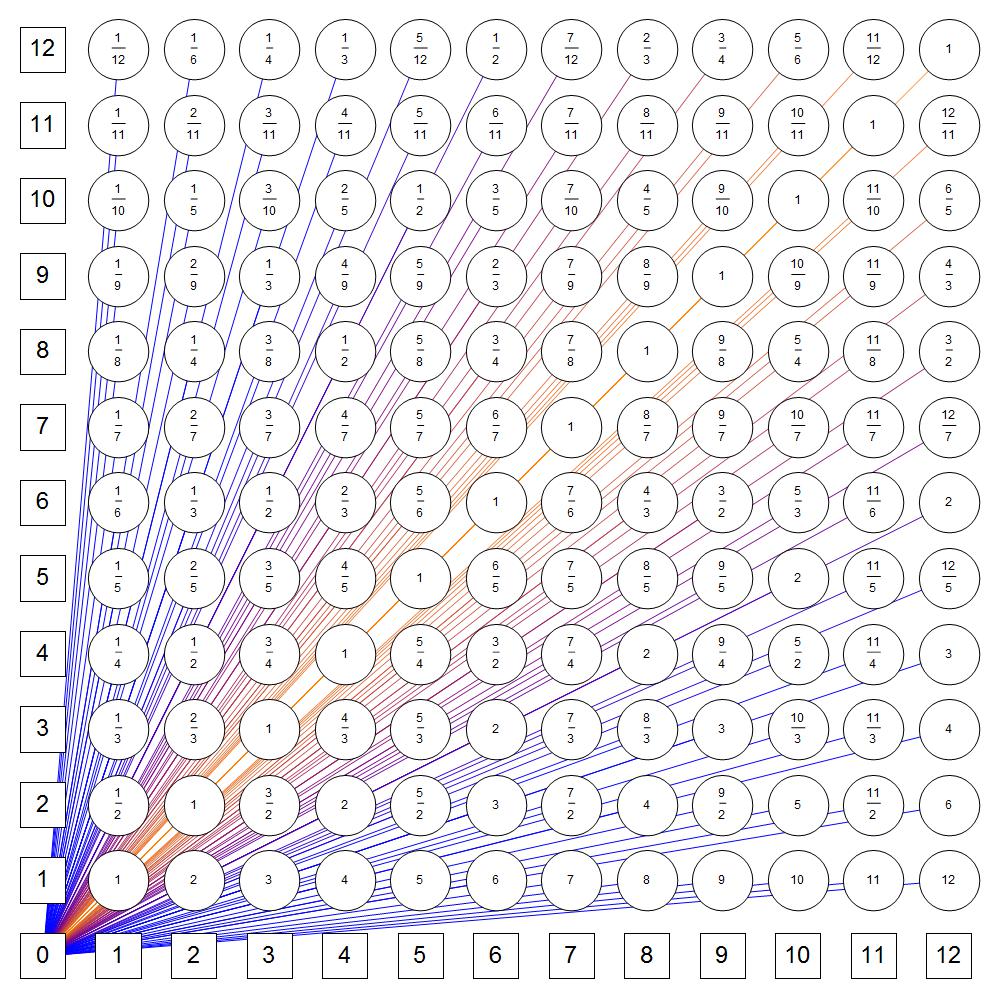 It's intuitively clear to me that the lines corresponding to the rational numbers can't fill all the space here (the gaps are especially noticeable around the numbers with small denominators / numerators).

This can be considered an illustration to marty cohen's answer.

I think this makes it "geometrically" obvious, at least for me.

EDIT 1: Any countable set is in bijection with $\mathbb N$, each element of which has a finite binary representation. Similarly any element of $\mathbb R$ is (by definition of as the completion of $\mathbb Q$) an infinite sequence of rational numbers, where for example you could fix the first $n$ terms of the $n$'th element (ie. $1,10,100,1001,10010,\ldots$).

Although the diagonal argument is at first unappealing, it is in fact geometric in nature, and simpler than it appears. The idea is the following:

The "geometric" part of this argument is the fact that you choose $x$ to be the opposite of the diagonal of the array \ref{arr}.

EDIT 2: I am not sure thinking of this geometrically is necessary, as it obscures the fact that countability vs uncountability is not really a property of the "geometry" in the real line. In fact I like that Lee Mosher pointed out the intuitive property I am guessing you were looking for (and in your drawing) that the rationals have "measure" zero while irrationals have "measure" one in the interval, but as some people pointed out in the comments, this is not a characterization of cardinality. It is true that every countable subset of the real line has "measure" zero, but there are also uncountable sets (1/3-Cantor set) also with "measure" zero.

So here is a nice proof I like that shows that this is really not a geometric property in the sense that you were thinking of, but a property of sets.

We now show the following lemma (where $B^A$ is the set of all functions $A\to B$):

Lemma 1: (Lawvere) If there exists a surjective function $\Theta:A\to B^A$, then any function $f:B\to B$ has a fixed point.

Now, suppose there was a bijection $\Theta:C\to\bf 2^C$ (and hence surjection), then the map $$0\mapsto 1\\1\mapsto 0$$ has a fixed point, which is clearly not the case. Contradiction.

Visually, think of $y_n$ as sitting at a point on a number line, with the $x_n$ as (single-point) hailstones coming down from above, and sticking to the number line as they land. If a hailstone hits $y_n$, it hops a tiny bit to the right, but by such a small distance that it will never get much closer to any of the existing hailstones.

The rational numbers can be represented diagrammatically as a 'tree' (for example Farey Sequence or Stern–Brocot tree). Such a tree, continued infinitely, is a fractal. The outer edge of the fractal will always be rough, whereas the real numbers (if similarly represented) would be smooth.