Why can no prime number appear as the length of a hypotenuse in more than one Pythagorean triangle?

Why is it that no prime number can appear as the length of a hypotenuse in more than one Pythagorean triangle? In other words, could any of you give me a algebraic proof for the following?

Please also have a look at the deeper question: Is there any formula to calculate the number of different Pythagorean triangle with a hypotenuse length $n$, using its prime decomposition?

This goes back to Euler, who showed that if there are two ways of writing an odd integer $N$ as the sum of two squares, then $N$ is composite. There is a 2009 article on this by Brillhart. Let me try to find a link. 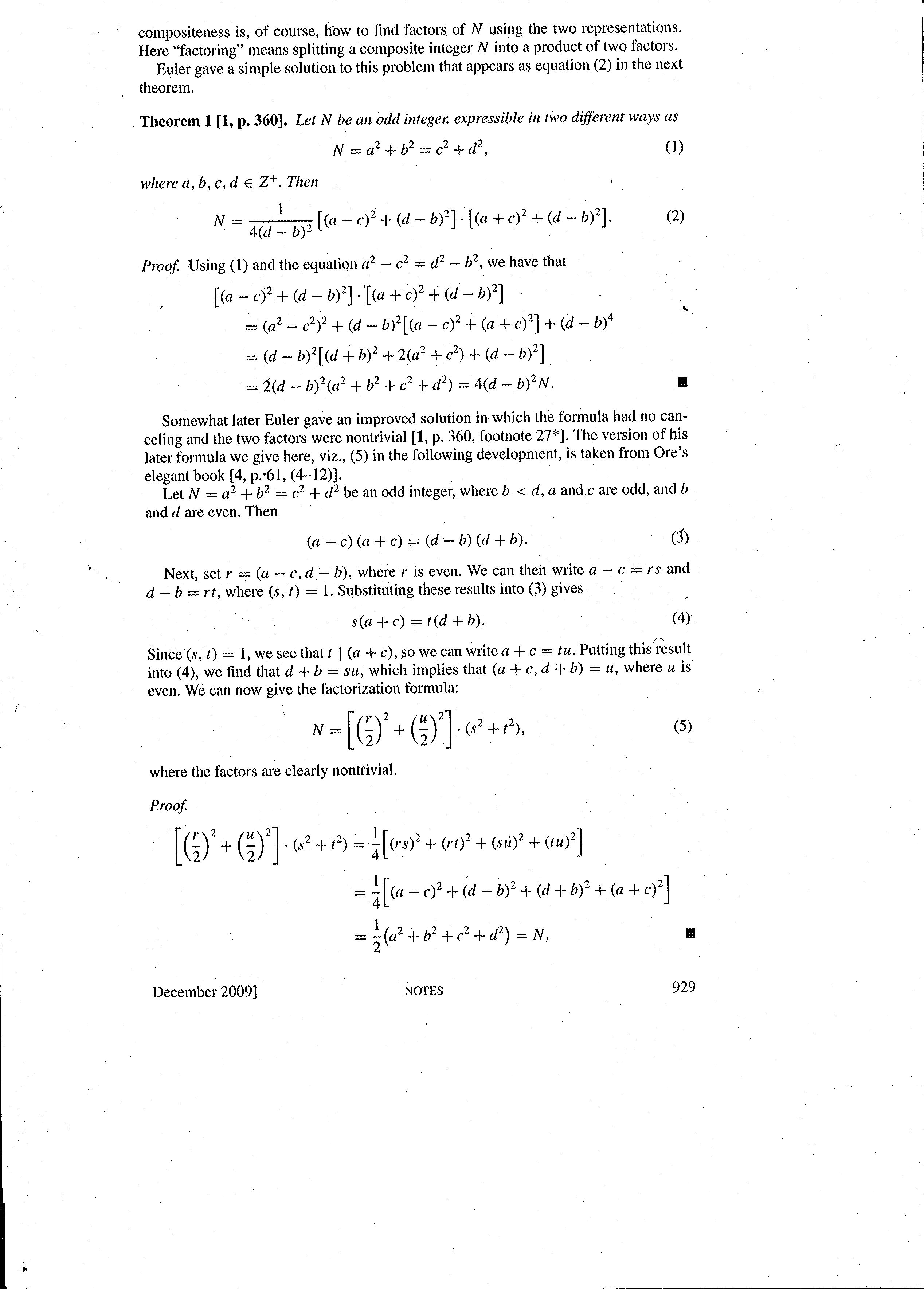 As noted in the comments and the accepted answer, this comes down to the fact that if a prime $p$ can be written as a sum of two squares, then the representation is unique up to switching and or negating the factors. A fancier explanation for this is the fact that $\mathbb Z[i]$ is a principal ideal domain and its unit group is $\{\pm1,\pm i\}$. (Of course, proving that $\mathbb Z[i]$ is a PID requires some sort of argument like that in the scanned note, but this is a more modern way to think about it.) Once one knows it's a PID, then suppose that $p=u^2+v^2$. Then $p=(u+iv)(u-iv)$, and the fact that $u+iv$ and $u-iv$ have norm $p$ shows that they cannot factor further in $\mathbb Z[i]$. Hence they are irreducible (i.e., they generate prime ideals). So the unique factorization of the ideal $p\mathbb Z[i]$ is as the product of the prime ideals $(u+iv)\mathbb Z[i]$ and $(u-iv)\mathbb Z[i]$. So $u$ and $v$ are unique, up to switching them or replacing them by their negatives, which corresponds to multiplying $u+iv$ by each of the four units in $\mathbb Z[i]$.

If a Pythagorean triple is primitive, $B+C$ is a perfect square as shown by

If $C$ is prime, then only one smaller value $(B)$ can add to it to make a perfect square. Given $C\&B$, there can be only a one $A$ to make a Pythagorean triple.

Not the answer you're looking for? Browse other questions tagged number-theory prime-numbers pythagorean-triples or ask your own question.

2
Is there any formula to calculate the number of different Pythagorean triangle with a hypotenuse length $n$, using its prime decomposition?