In this video, the professor describes an algorithm that can be used to find the minimum value of the cost function for linear regression. Here, the cost function is $f$, the gradient is $g_k$ where $k$ is the $kth$ step of the algorithm, $\theta$ is the parameters we want to find to optimize the problem, $d_k$ is the value used to update $\theta$. Here is a screenshot of the slide for reference: 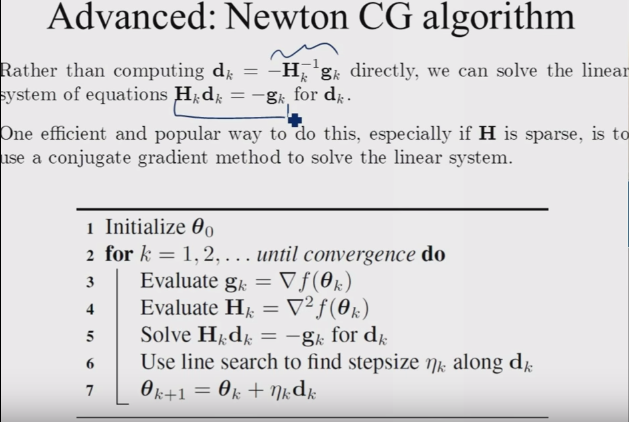 Feel free to scroll down near the end for a slide describing what the Newton's algorithm is doing in more detail.

My confusion comes from line 6 of the algorithm, the one about the line search. From my understanding of his explanation, the idea is that you increase the value of $\eta_k$ and each time you increase it, you compute your cost function $f$. The moment you get to the minimum, you stop and you use that $\eta_k$. I think this $\eta_k$ is essentially the learning rate you need to immediately go to the minimum.

But then if that is the case, why would you need any iterations? Wouldn't the linear search mean that after one step of the algorithm you're at the minimum?

I have another question that I would love to have answered if possible. So in the previous slide, the professor shows that for the newton's algorithm for linear regression, the $\theta$ after one step is equal to the solution you get from the method of least squares in matrix form. In other words, he says that you only need one step of the algorithm to get the optimal $\theta$. If this is the case, what is the point of showing us the iterative algorithm in the slide above? Is it because the matrix inverse is computationally expensive? The relevant slide for this question is below: 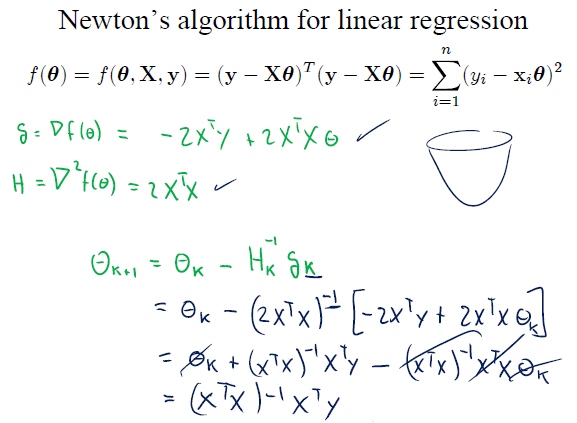 And for those who are interested in what the Newton's algorithm is: 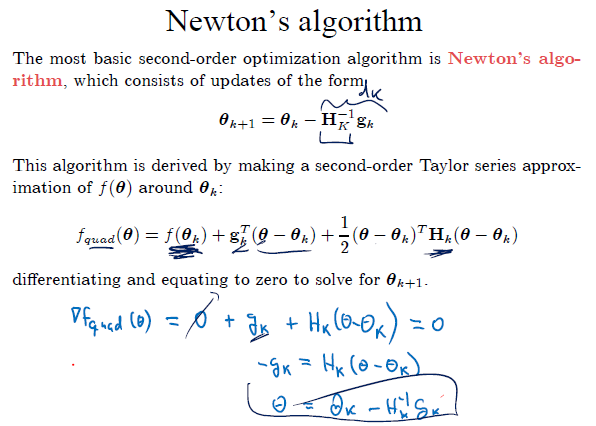 Answering your first question: If the minimum is indeed on your line, then yes. But if it is not (imagine that your function is a straight line, then a half circle, then a straight line again), you would have long steps at the straight lines, small steps around the circle, and then again long step (actually you would only have 1 step before and one after the half-circle).

For answering your second question: Using the squared error in the linear regression, we have the analytical solution for the problem y=wX (with w being our parameters we want to find) as w*=(X'X)^{-1} X'y (with X' being the transpose of X). It is the exact same solution you get if you use the iterative algorithm after one step (see e.g Bishop's Pattern recognition and machine learning), since the Hessian is constant.

You are right, that here there is no reason to use an iterative algorithm, but if you have another problem (say logistic regression) you see that the hessian is not constant, thus we now can make use of the algorithm.

I would strongly recommend having a look at Bishop's, he does a great job at explaining it.

Not the answer you're looking for? Browse other questions tagged calculus linear-algebra optimization numerical-methods or ask your own question.