Construct an equilateral triangle with area equal to a given triangle

It is straightforward to construct (straight-edge and compass) an isosceles triangle with area equal to a given triangle $\triangle ABC$, for instance as follows:

This triangle is isosceles, since $D$ is equidistant from $B$ and $C$, and has the same base and altitude as $\triangle ABC$ so has the same area.

Suppose we want to go further and construct an equilateral triangle with area equal to the given triangle — how might we go about that?

The fewer steps the better; I found I had to use the geometric mean construction and I wonder whether this step might be avoidable.

Something like a geometric mean is unavoidable since the problem is a quadratic equation for the side length of the equilateral triangle.

Here is a relatively efficient construction using a geometric mean. The savings is in re-using one side of ABC as the base of the equilateral triangle, and in using a non-perpendicular line to measure altitude, and allowing the semicircle construction of geometric mean to be applied.

On one of the sides, say AB, build an equilateral triangle ABD. Extend line CD to intersect AB at P. Find a length $g$ equal to the geometric mean of PC and PD, and take a point H on PD with PH = $g$. The equilateral triangle whose "height" measured along line PCD (from P) is $g$ has the same area as the given triangle.

The construction of the geometric mean is made easier by extending line CD to E so that P is the midpoint of EC, then using ED as diameter of a circle and taking $g=|PG|$ for PG a perpendicular to CD with G on the circle. Then draw the parallel to AB through H and intersect it with AD (at point K) to cut off the correct side length (AK) of equilateral triangle. 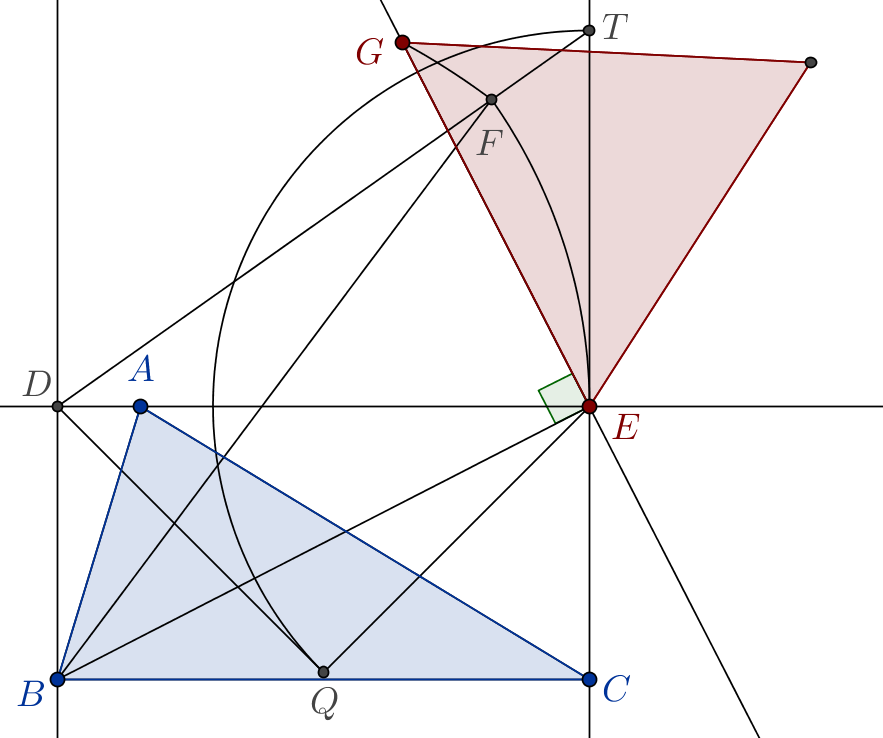 $EG$ is the side of an equilateral triangle with the same area of $ABC$.

Thank you to all you brilliant mathematicians for your ingenious methods on this topic. I do not understand trigonometry very well because I am not very well educated, but this is Euclid's approach to the problem which is general for generating similar figures of any kind of a given area, which, although perhaps cumbersome, I found convenient and readily intelligible. An equilateral triangle is made, a parallelogram constructed equal to it, another equal to the desired area applied alongside it in the parallels, then a mean proportional taken between the lengths of the two parallelograms. Because as the first line is to the third, so is the figure on the first to the similarly described figure on the second, the equilateral described on the mean proportional contains the desired area. The other methods are simpler I just thought I'd post this because it's purely geometrical. Below is a link to the proposition and my construction. http://aleph0.clarku.edu/~djoyce/elements/bookVI/propVI25.html construction 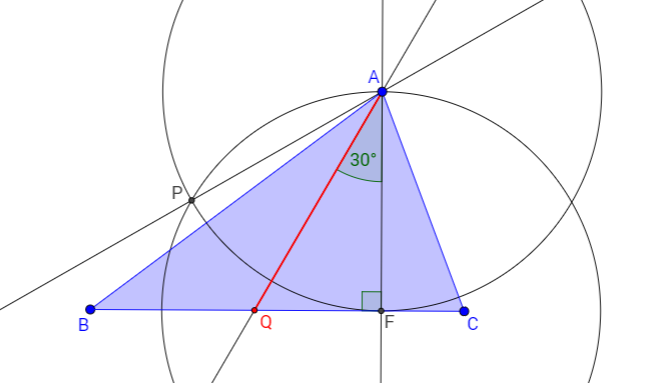 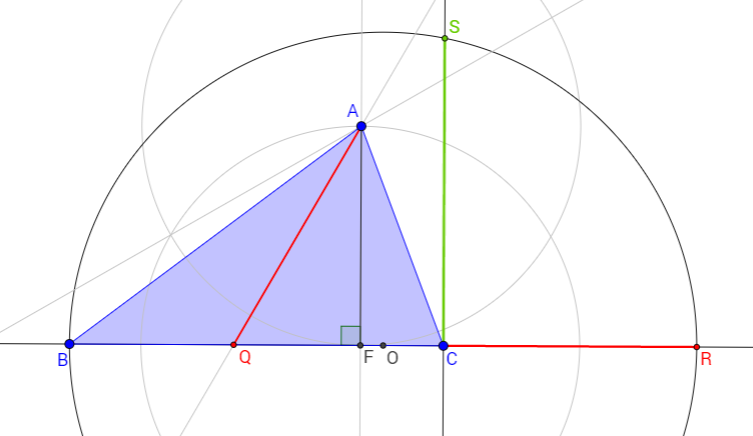 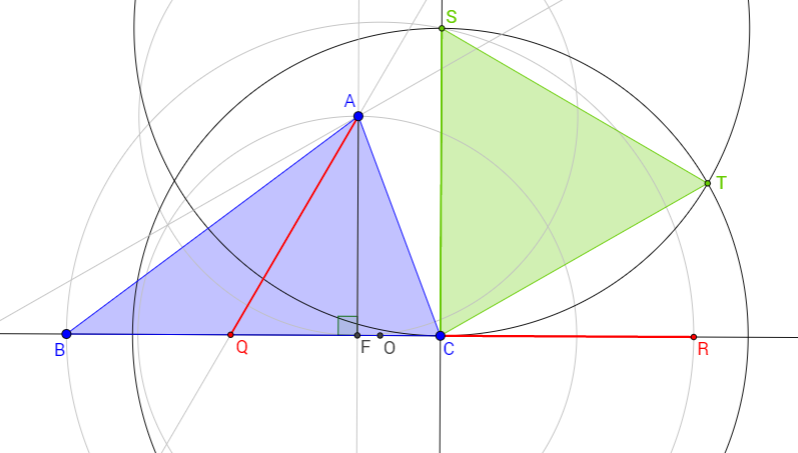 Without loss of generality, assume $\triangle ABC$ is isosceles with $AB=AC$. (Otherwise, construct an isosceles triangle with area equal to the given triangle, e.g. by the method given in the question.) 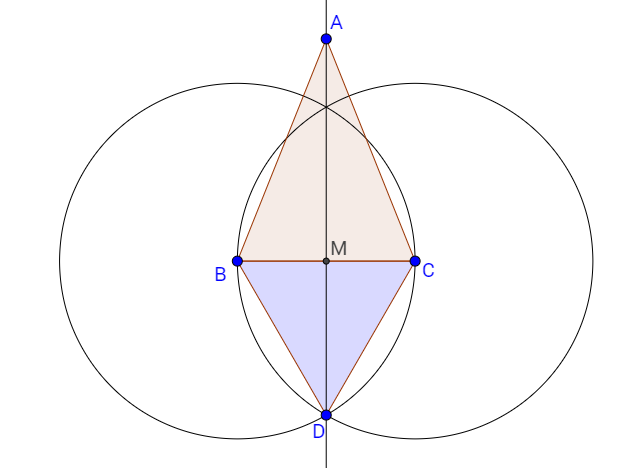 So to obtain the desired equilateral triangle we must scale the lengths of $\triangle BCD$ by $\sqrt \frac{AM}{MD}$. 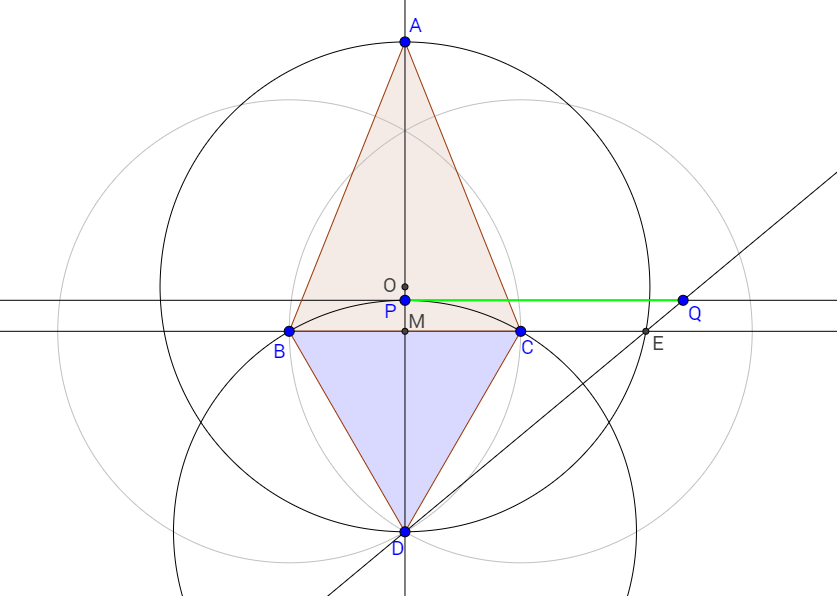 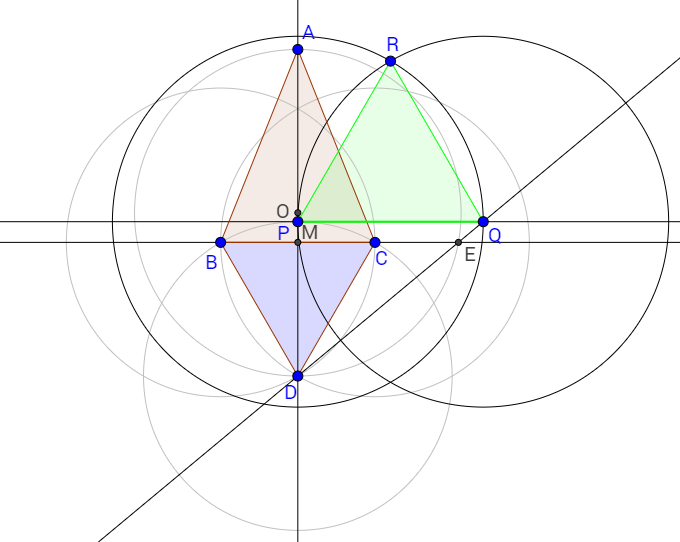 Not the answer you're looking for? Browse other questions tagged geometry geometric-construction or ask your own question.