Given distances (shortest paths) between four cities, how to show that they cannot be in the same plane?

In the example below we are given distances between four cities. The author of the book says that these distances "suffice to prove that the world is not flat".

If I understand the problem correctly, I am supposed to find some property which is fulfilled for distance between the vertices of any quadrilateral in a plane. And then show that the given distances do not fulfill this property.

The following excerpt is taken from Einstein Gravity in a Nutshell by Zee, page 66

The logic of differential geometry

Differential geometry, as developed by Gauss and Riemann, tells us that given the metric, we can calculate the curvature. The logic goes as follows. The metric tells you the distance between two nearby points. Integrating, you can obtain the distance along any curve joining two points, not necessarily nearby. Find the curve with the shortest distance. By definition, this curve is the "straight line" between these two points. Once you know how to find the "straight line" between any two points, you can test all of Euclid’s theorems to see whether our space is flat. For example, as described in the prologue, the mite geometers could now draw a small circle around any point, measure its circumference, and see if it is equal to $2\pi$ times the radius. (See appendix 1.) Thus, the metric can tell us about curvature. 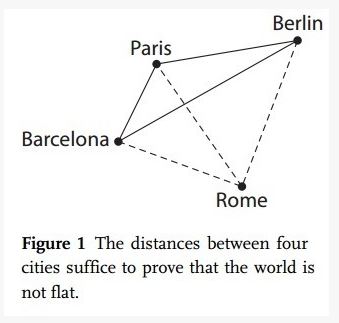 I have looked up distances between these four cities on WolframAlpha:

I also posted this to the other question.

So, if you don't get zero, your points are not in a plane.

In each of these triangles, the sum of the angles will be 180°. This should be obvious; of course, any three points define a plane. We need to check whether having these four cities on the same plane is consistent with the angles (and the distances) we measured.

A few calculations should convince you that it is not the case: the world is not flat. In particular, we find greater angles than expected (and their sum add up to more than 180°), which is indicative of positive curvature (spherical geometry).

A simple geometric approach. Take suppose Rome to be the point $(0,0,0)$ . Take Paris as $(1109,0,0)$ on $X$ axis. Given 2 points plot Berlin on the $XY$ plane(2 distances being given). Say you get $(X_1,Y_1,0)$. Now you are given three points , Draw three spheres centering each of the three points and radius of each sphere being the distance of Barcelona from each of them. So you get the coordinates of Barcelona. From the given data it will show that the perpendicular distance of each of Barcelona from the plane of the other three cities(namely the $Z$ component) will not be $0$

We need to consider only a single spherical triangle between any 3 cities and compute angles $ \alpha, \beta, \gamma $ opposite them using spherical trigonometry.

To convince that earth is indeed not flat, the spherical excess should be checked to be positive.Or,

If its volume does not vanish, then the cities are not coplanar.

Of course, it should be borne in mind that all of the tetrahedral solutions, including this one, are predicated on the supposition that the intercity distances supplied by Wolfram Alpha are straight lines, when they are actually more akin to geodesics.