I'm self-studying Spivak's Calculus and I'm currently going through the pages and problems on induction. This is my first encounter with induction and I would like for someone more experienced than me to give me a hint and direction. The first problem is as follows:

There is a simple rule: For any arithmetic progression, that is any series where the difference between consecutive elements is constant, the sum is equal to the number of elements, multiplied by the average between the first and the last element. 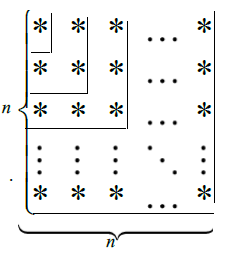 Here is the rest, hover on the yellow block if you want to see:

Once you realised this, your two sums can easily be expressed as a function of these two formulas.

To some extent: yes, it is a matter of trial and error, but you can get quite educated about it. But I'll answer your question properly later on, because it is an important and good question and independent of the particular examples used to illustrate it.

If you happen to know $\sum{i^2}$ then the second question is much like the first (but remember to subtract four times the shorter series from the longer one, because of the squaring). This is also not anything to do with deduction.

So, then: "In problems like these does one just do a bunch of trial and error, as I have done for quite a while now, or is there a more clever way to go about it?".

Here are three approaches to finding the sums of series before starting to prove the result. It's good to have all of them available.

Solving for $S$ we get

And we can do the same with the sum of squares

Solving for $S$ we get

Not the answer you're looking for? Browse other questions tagged summation induction or ask your own question.

4
Find the sum of the squares of the first $n$ natural numbers
0
Let $X$ denote an infinite set. Is every partitioning of $X^2$ induced by an associative operation $f:X^2 \rightarrow X$?