I've always thought of $dx$ at the end of an integral as a "full stop" or something to tell me what variable I'm integrating with respect to. I looked up the derivation of the formula for volume of a sphere, and here, $dx$ is taken as an infinitesimally small change which is multiplied by the area of a disc($\pi r^2$) giving $\displaystyle V = 2\pi \int_0^r x^2 dy$ which is the sum of these infinitesimals. 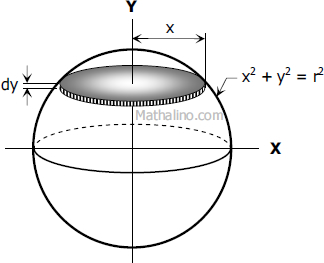 Now I'm really confused. Is it correct to think of it this way? Is there any other way to prove this result without using infinitesimals?

Part two to my question: Using this same logic of using infinitesimals, I tried to find the surface area of a sphere and looked at it as the sum of infinite rings.

The answer is simple, for volume at least. The standard Riemann integral does not require any infinitesimals to justify. Simply bound above and below by Riemann sums that tend to the same limit. This works for the Riemann sum for volume but not for the sum you suggested for surface area.

This argument is based on our intuitive understanding and expectation that volume is monotonic and finitely additive (when it exists), and applied to cubes gives the cube of the side length. And it generalizes to all volumes of revolution generated by a piece-wise continuous curve, giving us the familiar integral formula. If you want any further generalization, you probably want to look up the Lebesgue integral.

For surface area, you will be unable to construct sequences that give upper and lower bounds for it but tend to the same limit as your suggested sum. That means that the associated integral cannot correspond to the surface area.

Arc length and surface area, unlike planar area and volume, however, are not so easily axiomatized, and I think from the beginning one has to define it via the integral. It is then reasonable to question whether the integral captures length meaningfully. Well sort of. The arc length integral is seems to correspond exactly to the length of a flexible but inextensible string when held taut. One could say that the molecular bonds are approximately straight, so a string is nothing more than a polygonal curve with rather short segments. Indeed that is precisely the underlying meaning of the Riemann sum corresponding to the integral, which sums up the distances between consecutive points at short intervals along the curve.

I don't know of a simple intuitive justification for the integral for surface area, since it is a rather tricky thing; the naive approach of using arbitrary triangulation mesh approximations fails to match intuition. In any case, the fact remains that your integral is not going to have the same limit as whichever surface area integral currently used to define the surface area of a surface.

The integration in question can be performed without mentioning infinitesimals explicitly. In order to understand the subtle issues involved in the calculation, it may be helpful to think of infinitesimals as Leibniz, Euler, and Cauchy did.

The subtle question here is why the residual volume (between the volume of the sphere and the "toothed" solid obtained as the infinite union of infinitely thin disks) can be neglected, whereas in evaluating the area of the surface, for example, such an approximation is inadequate. One answer is that the error involved in the volume calculation is negligible or more precisely infinitesimal, whereas the error involved in calculating the area will not be negligible.

Think for example of diagonal line in the plane. If you approximate this by a staircase then no matter how small the individual steps, the combined length of the staircase curve will not be close to the length of the diagonal.

This phenomenon occurs not only for a diagonal line of course but for any curve, for instance the circle: if you approximate it by a staircase then length will go up dramatically even if you choose very fine steps.

Since the sphere can be obtained from the circle by rotating the circle around the $z$-axis, the same sort of thing happens for the area of the sphere.

The best source for calculus with infinitesimals is Elementary Calculus.

Here $dx$ is indeed an infinitesimal, and neither a typographical device nor a full stop.

The problem with the evaluation of the area is in the term $2\pi x\,dy$, which would be the area of an infinitesimal cylinder of radius $x$ and height $dy$. But in a slice of a sphere, the surface isn't vertical and you should instead consider an infinitesimal cone, sliced in a cone tangent to the sphere at the given $y$.

Not the answer you're looking for? Browse other questions tagged integration definite-integrals infinitesimals or ask your own question.