Are my calculations of a new constant similar to Mill's constant based on $\lfloor A^{2^{n}}\rfloor$ and Bertrand's postulate correct?

As Wikipedia explains in number theory, Mills' constant is defined as:

In other words, $\lfloor A^{3^{n}}\rfloor$ is said to be a prime-representing function, because $f(x)$ is a prime number for all positive integral values of $x$.

The demonstration made by Mills in 1947 (pdf here) is very easy to follow (one must be careful about the already known typos of the paper to follow properly the explanation).

It is also known that generically (as explained in this nice question at MSE) $\lfloor Q^{k^{n}}\rfloor$ always works if $k$ is at least $3$, so there are other constants $Q$ not defined yet that will work when $k$ is greater than $3$. It is also known that $k=2$ might not work because it depends on the Legendre's conjecture: is there always a prime between $N^2$ and $(N+1)^2$ (thought to be extremely difficult to demonstrate).

The reason of this question is that based on the original demonstration and using the Bertrand's postulate as key for some manipulations, I tried to do my own version of the Mill's constant to learn, and it seems that was able to find a constant $L$ that for $\lfloor L^{2^{n}}\rfloor$ provides a sequence of integers associated to their next prime, so it is possible to calculate the associated sequence primes by a prime-representing function. The difference of this approach is that the sequence of integers obtained from $\lfloor L^{2^{n}} \rfloor$ are not primes directly, it is an integer sequence, but there is an associated sequence of primes obtained from them. Here is how it works (the questions are at the end of the explanation):

According to Bertrand's postulate for a given integer (let also suppose for the demonstration that it is prime) $p_i$ it holds:

Which is also true if in the left side we just leave $p_i^2$:

The same conditions for the sequence shown in Mill's demonstration would hold for this expression, and in this case the exponent is $2$ instead of $3$ but we do not depend on Legendre's conjecture because the associated prime $P_n$ to $E_n$ is a Bertrand's prime (so it exists always in the interval $[E_n,2E_n]$). In other words, it is possible to use the power of $2$ because the sequence is not directly a sequence of primes, but a sequence of integers attached to primes by Bertrand's postulate according to the manipulation:

And in the same fashion as Mill's constant:

The way of manually calculating the constant is as follows, in the same fashion that Mill's demonstration, the relationship between $L_n$ (the constant calculated after knowing the $n^{th}$ element of the sequence $E_n$) and $E_n$ is:

These are the calculations for the first $5$ elements:

$L$ slightly grows on every iteration but the growth is each time smaller, so it clearly tends to a fixed value when $n \to \infty$. This is the graph: 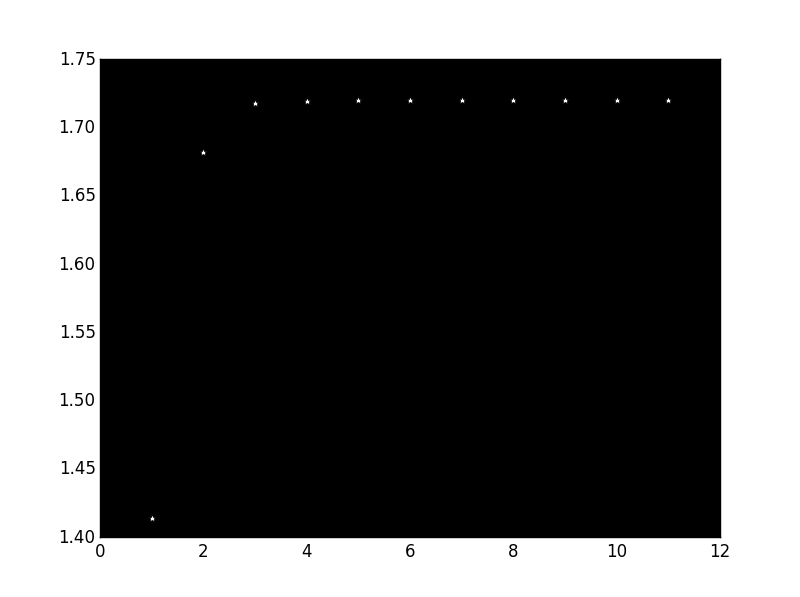 So in essence the prime-representing function would be:

This is the Python code to calculate and test $L$, please be free to use it or modify it:

Initially $L=1.71979778...$ seems not have been defined before, but I am not really sure. At least I was not able to find such constant at Mill's constant-related papers on Internet, but it seems interesting.

The advantages of $L$ versus $A$ (the original Mill's constant) would be:

It has been a long time since I wrote the above question, and I was able to gather a confirmation that the contents and calculations are correct. During the last year I tried to publish the contents as a very simple paper ($5$ pages long) in several (up to $7$ different) known journals (each one of them took from $1$ month to $4$ months to receive feedback since the paper was sent). All of them confirmed (via peer review) that the calculations are correct, but basically the general comment is that is a result that can be expected to happen, so it is not so interesting to be published.

I have learnt from the experience how to write correct papers (in American English) and how difficult is the professional world of publications. So let me say that now I can understand better the struggles of professional mathematicians to be able to publish new and interesting content (I admire you!).

I would like to share all the anonymous feedback I have received from the different peers that reviewed the paper in order to close the question. The more feedback I received the better the paper was getting in terms of completion. So for your viewing pleasure (some of them were extremely kind and useful to update the paper) and not in the same order that the paper was sent to the journals:

Plus the classical answers:

So in general, it has been a good experience, I have found a lot of patient and kind peers, professionals that had a serious look to the paper (even if I was not a professional) and provided very useful insights and advises.

Finally I wanted to thank @Konstantinos Gaitanas the kind help and review during these months by email. Unfortunately I was not able to give a successful result to that effort in this occasion. But I hope that this experience will help other people to try again until success. Lessons learned.

Not the answer you're looking for? Browse other questions tagged sequences-and-series number-theory proof-verification prime-numbers constants or ask your own question.

14
What is the significance of the power of $3$ in the sequence of primes given by $\lfloor A^{3^n}\rfloor ?$
8
Inequality appearing in proof of Mills' Theorem
0
Generalization of Mills' theorem