I'm doing some regents practice questions, and one of them asked

And the answer choices are

My teacher said the answer was choice one but I'm having trouble understanding why.

My approach was to draw out the probabilities, since we have 3 children, and we are looking for 2 boys and 1 girl, the probabilities can be Boy-Boy-Girl, Boy-Girl-Boy, and Girl-Boy-Boy. So a 2/3 chance, but I don't get how it's a 3/8 chance. Any help is appreciated.

Since there are two genders and three children, that's $2^3=8$ permutations. You had three permutations. They would be BBB, BBG, BGB, BGG, GBB, GBG, GGB, and GGG. Out of those, the permutations with two boys and one girl are BBG, BGB, and GBB. The answer is the ratio of how many choices fit your conditions to the total number of possibilities, $\frac{3}{8}$.

I drew it out this way: 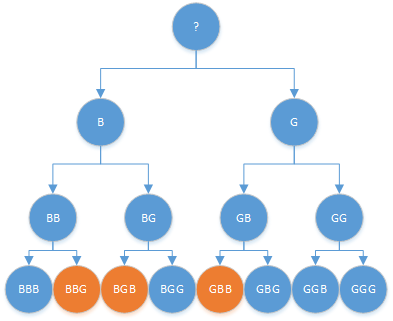 In case this is causing confusion, combinations don't depend on order. So if you had a lottery ticket, it matters whether you had the right combination of numbers. Or in this case, we are asking for the number of boys and girls, rather than the order that they appeared. The Permutations do consider order, so that would be more like a code for a safe that must be done in order, or the letters in a password, or in this case the sequence of genders where BGB would be a different sequence to GBB.

So a combination is like the list of stuff at the beginning of a recipe, and the permutation is the order that you add the ingredients. You can take the same list of things and add them in different amounts and different orders, and it will likely make a big difference to the result.

Just to add that you can do it via combinations, as you originally thought, but you have to take into account the relative probabilities of those combinations, which derive from the set of permutations. As we have seen from the other answers, there are 3 permutations out of 8 which contain 2 boys and a girl.

Now for the frequencies

The total of them all is 8, and the number matching our requirement is 3, giving 3/8ths.

In this question, the easiest and clearest approach was to list out the permutations and count how many matched our requirement. For larger problems, it can be simpler to either quickly collect the easy cases and then look at the permutations for a restricted set, or focus on the possible combinations. This is particularly true when there are more complex options in the construction of the set.

Edit: More on Combinations and Permutations

@WoJ has a question: why does order matter? Suppose they were triplets?

I'm not saying that the chronological order of birth is what matters, only that you have to label them. We generally write permutations as a sequence which maps to an ordering of the variables; if I flip a coin 3 times and the result is HTH then I'm implicitly saying that the sequence represents the flips ordered chronologically. But we could flip 3 coins and order them by size, or by the age of the coin; it's just a way of identifying the different flips so that we can correctly account for the possibilities.

But! You must label them before you consider how they landed. Arranging heads first then tails is already turning the result from a permutation to a combination, and making things much harder by making the result dependent on the values, when they were independent variables at the beginning. So to assess the relationship between the original tosses and the resulting combinations we have to label them first or we'll give ourselves a headache.

We can see that it is the permutations that matter rather than the combinations for random independent coin flips by doing this experiment: flip 2 coins, and if they land the same (2H or 2T), then mark 1 in the 'Same' column. If they land differently (1H 1T) then mark 1 in the 'Diff' column. If the probability is determined by the combinations, then there is only 1 combination (1H 1T) that will give a 'Diff' result, vs 2 (2H and 2T) that give a 'Same' result, and after a few rounds of flips we should see twice as many marks in the 'Diff' column. Feel free to try the experiment; run it maybe 20 times so that it is clear whether the answer is more like 2:1 or like 1:1.

I predict that the result will be 1:1, because the probability is in the coin flip, so we have to look there for the statistical basis of our calculations. The probability is 50/50 of a single independent coin flip. So the first flip (or the flip of the biggest or oldest coin) is 50/50 H or T. Now, given that the first flip was a Head, what will the second be? These are independent coin flips, so the chances are still 50/50. This gives us a second value. Since these are independent flips, we label them differently and draw up either a table of their values, or a list of the permutations:

Now we can look at the categorisation of these permutations as combinations:

At no point have we cared how we ordered the coins, only that we could identify them separately because they have independent probabilities assigned to their flips.

We might instead have a lottery ticket, which only matters what the combination is; then looking at the permutations would be a fruitless exercise, as the drawing process enforces the relationship between probability and combination rather than permutation.

Do demonstrate the problems of arranging the triplet birth result into combinations before applying the probabilities, let's actually calculate it that way around. We flip 3 coins, and ignoring the chronology arrange them with heads first. The possible results are HHH, HHT, HTT, TTT. 4 combinations.

But how can we apply our probability that each birth is 50/50? By rearranging the order, we are breaking the mapping between an individual birth and the item in the combination; you can see that straight away in that the only way the first coin in our rearranged set can be a T is if all 3 coins came up T, and we know intuitively that that's much less likely than the probability for any given toss being T. Can we still do it? Well, yes, but it's tricky.

The first combination is HHH. What is the chance of throwing HHH? The flips are independent, and these coins can be rearranged however you like, but it will always have to be 0.5 x 0.5 x 0.5 = 0.125. So immediately the HHH combination has a chance of 0.125 instead of 0.25. Just because we have 4 categories, doesn't mean the probability relates to that number in any way.

The same argument applies for TTT. So now we have accounted for 0.25 of the probability out of half the combinations.

What of HHT and HTT? Well, since the chances of H and T are equal, we could relabel H as T and T as H, or call the sides A and B without any loss of generality, so the probabilities must be equal here too; both combinations are 2 of one and 1 of the other. So the remaining 6/8 of the probability give us 3/8 for each option.

By contrast, to calculate that from the original tosses, we have:

TLDR: The important thing is to look at the mechanism by which randomness appears in the system, and to then measure the probabilities from there either in terms of combinations or permutations, but not blindly applying either as the method entirely depends on the mechanism of the randomness. Both approaches can be made to work, but only if you correctly account for the probabilities according to the system you are considering.

A systematic way to calculate @probablyme s answer to encode the letters B (boy) and G (girl) as a 3 digit binary number with the logical value 1 for true and 0 for false ( that the digit represents a boy ).

We then count the total number of "ones" equals 2. This is the same as the "population count" function used in this question and answer.

And as we can see, for 3 of the 8 states the function evaluates to 2. This means that after counting all possibilities, we found that 3 of the 8 equiprobable states correspond to two boys. This gives a probability of $\frac{3}{8}$.

The strength of this approach is of course that if we modify the question to account for more advanced things, these can be included with fast logical bit-wise operations on the numbers!

Since the question does not mention the order, the possible combinations are

because 'not a boy' is same as a girl (opposite), it could be calculated like this.

The following method avoids any need to consider the number of permutations with 2 boys and 1 girl.

3 children must include either at least 2 boys or at least 2 girls (but not both). Hence: