How can polygon faces be calculated from edges?

In a 2 dimensional plane [given that I know the vertices of the start and end of a number of connected lines], how can I calculate the faces [enclosed by those lines](and there respective vertices) from the lines in the plane? 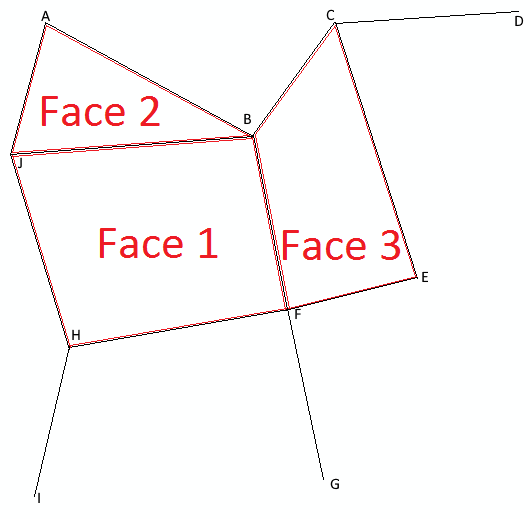 In this example I am looking to identify (mathematically not visually) faces 1, 2 and 3 in the form:

Doing this in software, I first discard the edges that are not connected to another edge then start traversing around the remaining edges but it seems there must be an efficient way to do this.

I’m going to call the inputs to the program vertices and segments. The vertices are numbered, and represent points in the plane, so that

So the vertices form an array $v$ of $xy$-pairs.

The “segments” are described by pairs (I’ll use brackets for these to distinguish them from coordinate pairs) of vertex-indexes, so that an edge between the first two vertices above is described either as $[1, 2]$ or as $[2, 1]$. I’ll actually distinguish between these two, calling any such ordered pair of vertex indices a “dart” (because that’s the term that folks who do planar graphs use). So for any segment, there are two different “darts” corresponding to that segment, one in each “direction”.

I’m going to assume you can do some things in whatever programming language you’re using, things like

OK, here’s what you need to do:

We’ll sometimes talk about the “next” dart in a star, meaning the one after it in the ordered list, with the rule that the “next” dart after the last dart is the first one, so that in our example, the next dart after $[F, G]$ is $[F, E]$, but the next dart after $[F, B]$ is $[F, H]$. So "next" means “next one around reading counterclockwise”. From now on, I’ll assume that the star of each vertex is ordered like this. Note that if the star of a vertex contains only one dart, $u$, then the "next" dart after $u$ is just $u$.

Foreach dart d in the dart list Q; set polygon = empty list if dart d is marked, do nothing otherwise: while d is unmarked: mark the dart d add the dart d = [i, j] to the polygon in the star for vertex j, the dart [j,i] appears somewhere; set d to the the next dart in the star after that one end while output polygon end foreach

For instance, in your example,the first dart in the dart-list $Q$ might start be $JB$. We set the polygon $$ to be empty. Now we enter the loop. We mark the dart $JB$, and add it to the polygon.

Finally, we go to vertex $J$ and look at its dart-list $(JH, JB, JA)$ and find that after $JH$ comes $JB$…which is marked, so we exit the while-loop, and output the polygon.

If that next dart were, say, $FH$, we’d do nothing with it, because it’s already been marked. But if it were $BC$, we’d do the sort of thing we did above, and eventually output the polygon $BC, CE, EF, FB$.

But what happens when we get to a dart like, say, $EC$? If you trace through the algorithm as I’ve done above, you’ll see that we output

which is the “big outside polygon”, with all the “spur” edges included.

Assuming you can find a given dart within a given star in constant time — you can do this by storing the darts of a star in a dictionary, in which the “value” for each dart is the “next” dart, during the setup phase, all of this takes time that’s linear in the number of segments in the input.

Of course, when you’re done, you have to get rid of things like the $HI, IH$ in the polygon lists. Fortunately, you can do this by representing the polygon as a stack. You push each new dart onto the stack UNLESS the stack’s nonempty and the top of the stack is the opposite dart, in which case you pop off the top of the stack. With that approach, all “spurs” just disappear during the processing phase. :)

Not the answer you're looking for? Browse other questions tagged geometry polygons or ask your own question.

2
Forming a simple polygon from the extrusion of a polygonal chain
2
On the Formula: $V-E+F=2$
0
Show that every convex polyhedron contains a face with either 3, 4 or 5 edges
1
How to mathematically describe a whether an edge belongs to a geometric face
2
Definition of an arrangement of the plane
2
Which geometric shape of icosahedron origin has 180 faces 270 edges 92 vertices?
4
What captures our intuitive notion of faces, edges, and vertices?
1
How do I find a reduced set of faces required to check for intersection, to determine if two convex polyhedra intersect?
3
How to construct a chamfered dodecahedron with equilateral or coplanar faces?