Why not define infinite derivatives?

Is there any particular reason "infinite" derivatives are not well-defined? For example, $x \mapsto x^{\frac 13}$ at $x=0$. More precisely, what is wrong with the following definition of differentiability?

There doesn't seem to be anything obviously wrong with this.

The most important theorem, the mean value theorem, still holds with this definition, according to Wikipedia. Furthermore, unless I'm mistaken, with this definition there is the nice property that if $f:(a,b) \to \mathbb{R}$ is injective and differentiable, $f^{-1}$ is as well.

I am assuming, of course, that there are problems since we use the stricter definition:
what are they?

It is a matter of convention and agreement between mathematicians.

For me, there is no problem if you say that the function is differentiable at some point $c$ even if $\lim_{h \to 0} \frac{f(c+h) - f(c)}{h}$ is equal to $+\infty$ or $- \infty$. This would only extend differentiability of some functions to some larger set, for example your example $x \mapsto x^{\frac 13}$ would with your definition be differentiable on $\mathbb R$ and not only on $\mathbb R \setminus \{0\}$. So I would not say as you say that derivatives of some functions in some points that are equal to $+\infty$ or $- \infty$ are not well-defined, they are well-defined, it is just that we usually take by definition that the derivative of some function at some point is a finite number.

Situation is, viewen in this way, similar to that of series.

So, I would say that there is nothing wrong with your extended definition.

I agree with the above answer of @Farewell.

Another aspect worth considering in my opinion is the inverse function theorem.

If a function with "derivative" $\pm \infty$ has an inverse, then in many cases the derivative of the inverse at the point will be $0$. (Basically we get a vertical line with a horizontal line when we switch the dependent and independent variables.)

First let's try to consider some geometric problems associated with having "derivative" $\pm \infty$ of a one-dimensional function. At that point, the associated tangent line would clearly be vertical.

But therein lies a major issue: how can one consistently define the slope of a vertical line? One can't -- it's impossible because both $\infty$ and $-\infty$ will be equally reasonable choices -- this none-uniqueness problem doesn't happen for any other type of tangent line by the way.

In more than one dimension, the geometric problems associated with trying to define an "infinite derivative" are even worse. Specifically, an "infinite derivative" would correspond to the non-existent inverse of a singular matrix, and there are literally uncountably many ways in which a matrix can be singular (i.e. not be invertible and have determinant zero), so any attempt to find a reasonably small number of "pseudoinverses" for all singular matrices would not be tractable.

(Moreover the space of invertible matrices has a nice property called "openness" which is similar to the idea of an open interval that non-invertible matrices simply do not have. Think of it this way: the set of real numbers which have well-defined reciprocals is $(-\infty,0) \cup (0,\infty)$ -- two open intervals, whereas the set of real numbers that don't have a well-defined reciprocal, $\{0\}$ is a point (points have the property of being "closed"). A similar situation exists in higher dimensions.)

In the proof of the inverse function (for a general number of dimensions, including $n=1$), we rely on the derivative being "non-zero" (in a generalized sense) in order to show that we can find a local inverse for the function centered at that point.

The proof doesn't go through when the derivative is "zero" because we can't define a unique value for the derivative of the local inverse function at that point (again, this is even true for $n=1$ as I mentioned above). 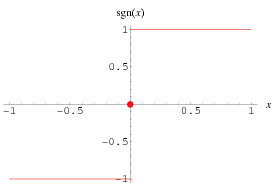 Maybe $\infty$ is intuitively the value that we would like to assign to the gradient of this function at $x=0$. But given that the proofs of the product rule and the chain rule rest upon differentiability implying continuity, I believe defining infinite derivatives would cause more problems than it solves.

Not the answer you're looking for? Browse other questions tagged calculus real-analysis derivatives or ask your own question.

2
Why can't we define a derivative of a function at a discontinuous end point of its domain?