I tested the Rabin-Miller pseudo prime algorithm using a single test value and found that the number of false calls depends on the size of the number to test, reducing to a (conjectured) negligible probability of error for very large numbers.

A number is randomly chosen to be tested. If the number is $0,1,2,3$ or even the correct result is returned. If the number is odd and $>3$ the Rabin-Miller algorithm specified below is used. The result is compared with table values. This algorithm use a random number $a$ for the test. It would never miss a prime but occasionally report a composite to be a prime. If the test is erroneous an error is returned. I used the method at oeis A014233 where a method for exact testing of primes using multiple Rabin-Miller tests is described, together with squeezed prime tables, to assess the truth of primality.

The algorithm used is:

But how to prove the conjecture or at least make it resonable?

I made a test with double check of Rabin-Miller and made a diagram: 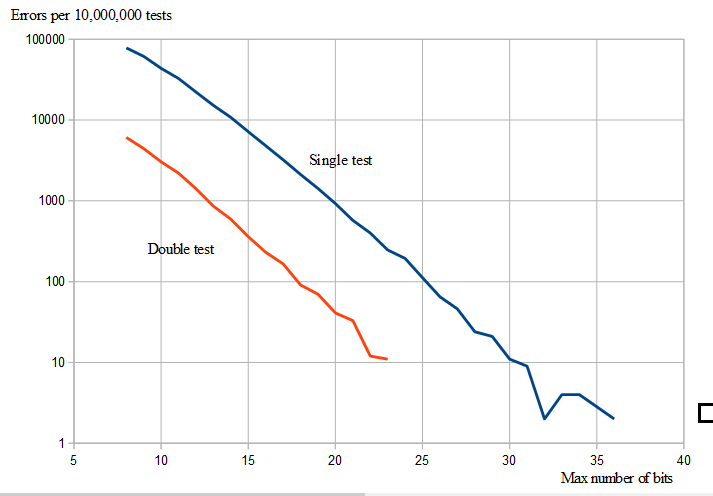 The Question asks about the distribution of (odd composite) strong pseudoprimes $n$ to a base selected randomly (uniformly) from the set $\{2,\ldots,n-1\}$.

The problem has been studied in the literature. A theoretical upper bound for the probability $p_{b}$ of a $b$-bit odd number $n\gt 1$ chosen at random (uniformly sampled) that passes the strong pseudoprime test to a random base chosen from $\{1,2,\ldots,n-1\}$ is composite is:

as established by Damgård, Landrock, and Pomerance: Average Case Error Estimates for the Strong Probable Prime Test in Mathematics of Computation Vol. 61, No. 203 (July 1993). Note that they allow the choice of base $a=1$, for which any odd composite will pass a strong pseudoprime test, thereby increasing the chance of a false positive.

While it is understandable that one might exclude base $a=1$ because it gives a trivial "strong-pseudoprime test" that always succeeds, the same is true of $a=n-1$. So why not exclude that as well?

In randomly sampling the bases $a$ between $1$ and $n-1$ we introduce an element of uncertainty that complicates our analysis. If more than one base were being used in our testing, e.g. sampling bases without replacement, an advantage would be more evident.

I'd like to support conjectured form of a chance of "error", i.e. that a number $n$ passing the Miller-Rabin (base $a$-strong pseudoprime) test yet is composite, by taking that random element out of the procedure and giving exact rather than sampled probabilities. To this end let's settle for the sake of discussion on $a=2$ as our base. After all, we are computing the test only for odd numbers $n$, and automatically the choice $a=2$ is coprime to $n$.

Further counting 2-strong pseudoprimes versus odd primes have been exhaustively worked out to $2^{64}$, so it makes sense to define the probability of "false success" error in a base $a=2$ test for odd numbers up to $n$ as:

The graph below is driven by data generated at increments $n = 10^k$, and then taking the negative (common) logarithm (i.e. base ten) of the probability so defined. I find the interpretation of common logs in terms of decimal places easier to grasp, but here the key characteristic is the slope of the trend line: 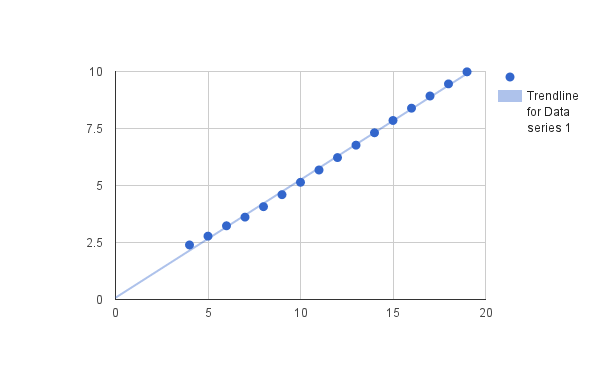 This slope is roughly the one-half conjectured by OP, i.e. $e = O(2^{-b/2})$, and doesn't depend on whether base two or base ten is being used for increments. If anything the slope seems slightly steeper than one-half, so that the chance of error is dropping a little faster.

However this doesn't convey to me that a single Miller-Rabin test is "good enough", but rather that one such test is quite efficient in weeding out composites. A follow-on test, perhaps of an entirely different kind, is worth doing if one really wants to drive the chance of "false positive" error for primality into negligible magnitudes.

Here are the counts of $2$-strong pseudoprimes and odd primes below the indicated $10^k$ increments, summarized from the sources linked above and used to create the scatter plot and trendline with Google Sheets:

Table 1: Counts of 2-strong pseudoprimes and odd primes up to $10^k$

Not the answer you're looking for? Browse other questions tagged algorithms prime-numbers computational-mathematics conjectures pseudoprimes or ask your own question.

4
Constructing arbitrary sized Miller-Rabin Primality Test Case Numbers
1
Looking for a more efficient primality testing Algorithm than Miller-Rabin
4
Why using primes as base in the Rabin-Miller test?
3
Proving that a number passes the Miller-Rabin test
0
Miller Rabins Primality Test - Explain it to a math dummy
1
Why is this deterministic variant of Miller-Rabin not working?
0
Conjecture about the prime number function