Is this the projective plane or the Klein bottle? (Fundamental polygon) 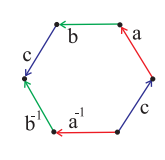 Since they are inverses, can we swap the direction of $a^{-1}b^{-1}$ to get $ab$ in the opposite direction.... leading to the fundamental polygon of the projective plane?

I was thinking that other possibility is that it could be the Klein bottle since the new top and bottom arrows are in the same direction... but surely this would only work if $ab=a^{-1}b^{-1}$ ... i.e. the space is abelian... so maybe the Torus?!

I am really confused about this one so it would be good to gain some insight into what is happening, thanks

Closed surfaces are determined by the two properties:

As you have already correctly determined, the considered surface is not orientable, because the edge $c$ is glued with the opposite orientation. Thus one has to determine the Euler characteristic $\chi$, which can be calculated by the formula: $$\chi = \#\{Vertices\} - \#\{Edges\} + \#\{2-cells\}$$

The notation in your picture is inconsistently overdetermined, and this seems to be causing you confusion.

It is then clearer that you can combine the upper and lower green-red-arrow-pairs into a single arrow pair, and then it is just the standard gluing diagram for the Klein bottle, as you say.

The appropriate place for "$-1$"s to appear is when you go around the gluing diagram and write down the corresponding word in $a,b,c$ and their inverses. Thus, starting from the upper right $a$ and going counterclockwise, the word is $abcb^{-1}a^{-1}c$, where you write a $-1$ superscript when going backwards against the direction of the arrow.

Not the answer you're looking for? Browse other questions tagged general-topology algebraic-topology fundamental-groups free-groups klein-bottle or ask your own question.