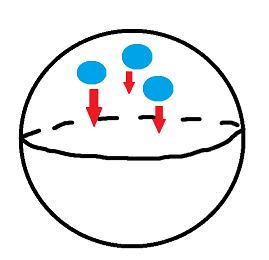 I was curious to know if we could represent two other common topological spaces: the Klein bottle and projective plane with simple diagrams as above which they are homotopic too.

Could someone provide me with examples of these? (I hope this question is OK and not too broad)

I interpret your question as follows: "Is there a (nicely) embedded graph in $S^3$ whose complement is homotopy equivalent to the projective plane or Klein bottle?" To see why both of your examples fall under this, think of $S^3$ as $\Bbb R^3$ with a point at infinity. Then your first example is the complement of two circles in $S^3$ (the picture you get is called the Hopf link, and your second example the complement of a graph with one vertex and three edges.

Note, by the way, that because these spaces do not embed in $\Bbb R^3$, then certainly your open set cannot deformation retract onto them. This gives us the hint that no, what you want is not possible.

The theorem we want is Alexander duality (though we'll dualize in the opposite way that Wikipedia does) - this says that for your graph $X$, $H^1(X) = H_1(S^3 \setminus X)$. Graphs can never have torsion in either their $H_1$ or their $H^1$, and hence $H_1(S^3 \setminus X)$ is torsion-free. But $H_1$ of a non-orientable surface always has a 2-torsion element! So this is impossible. It's much harder to prove, but still true, that an arbitrary open subset of $S^3$ cannot have torsion in its first homology group, so even a more general formulation of your question is still not possible.