Why don't we differentiate velocity wrt position in the Lagrangian?

To set my question, lets consider motion of a particle along a line:

and take the Lagrangian to be:

By applying the Euler-Lagrange equations:

we get back Newton's law of motion.

This follows formally where we consider $x$ and $\dot{x}$ as independent, but if we consider $\dot{x}$ as velocity, then it is indeed a function of position so when we partially differentiate $L$ wrt $x$ the $\dot{x}$-terms shouldn't vanish and this messes up the derivation. What am I misunderstanding?

I am beginning to think that this is a non-question as some people seem to have suggested and I am being confused by the hand-wavy math in basic physics textbooks.

We take the Lagrangian to be simply a functional: $TC \to \mathbb{R}$, which when written locally is in terms of $x$ and $\frac{\partial}{\partial x}$.

Does this make sense or have is there something I am still missing?

This is an excellent question! And the answer has its roots back in the origin of the Euler-Lagrange equations as solutions to Hamilton's variational principle.

Recall that the Euler-Lagrange equations are the result of extremising the action $$S(q[t]) = \int_0^T L(q, \dot q)\,dt.$$ It is conventional to write $L$ as function of $q$ and $\dot q$ (and this will lead to the cleanest formulation of the Euler-Lagrange equations) but it is by no means rigidly required: you could add $q^2$ as a third argument to the functional $L$, if you really wanted to, and of course $q$ and $q^2$ are not independent.

Now we apply the usual integration by parts,

This is an excellent question (and I'm biased because I also have it) no one seems able to answer it well. Here are some threads about it I have found which discuss it:
(1) https://physics.stackexchange.com/questions/168551/independence-of-position-and-velocity-in-lagrangian-from-the-point-of-view-of-ph
(2) https://physics.stackexchange.com/questions/885/why-does-calculus-of-variations-work

So the Lagrangian is just a regular function of two variables.

The Euler-Lagrange equation then gives us a particular curve in phase space (NOT all of phase space).

The curve is in three dimensions and we can project it onto the $tq$ plane.

On this plane, the curve happens to define $q$ implicitly as a function of $t$ (I don't know how to prove this or exactly why it's true, but it does seem to be the case).

Therefore, for every point $t \in \mathbb{R}$, we have a point in $\mathbb{R}^2$=tq-plane which is $(t, x(t))=(t,q)$ defined implicitly by the projection of the curve given by the solution to the Euler-Lagrange equation.

Since physicists already know in advance that, for the curve in 3-space defined by the Euler-Lagrange equation which they will be considering (note that they don't consider any remaining part of phase space where this is NOT true), it will be true that $r=x'(t)$ and $q=x(t)$, they just call the variables $x$ and $\dot{x}$ i.e.

The notation that physicists use is a sloppy abuse of notation that assumes in advance that only the solution curve of the Euler-Lagrange equation (which is equivalent to the principle of least action) will hold (since they always assume that it holds).

So in some sense (if you consider the entire $r$ axis in phase space, and not just those points which are part of the solution curve of the Euler-Lagrange equation) $\dot{x}$ isn't the velocity of $x$, so they really are just independent variables.

I would love to see to a rigorous proof of all of this myself, but so far this is the only answer that has made sense to me.

A picture that sort of explains the idea of what I am trying to say: 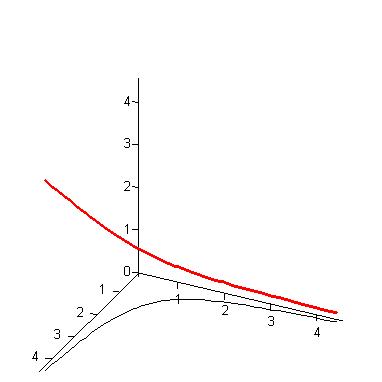 I think your are getting confused by the notations of the partial derivative. If $L$ is a function of two variables, $L:(x,y)\mapsto L(x,y)$, $\dfrac{\partial L}{\partial x}$ is the derivative with respect to the first variable and $\dfrac{\partial L}{\partial y}$ w.r.t to the second (if you write these derivatives $\partial_1 L$ and $\partial_2 L$, there is no possible confusion). Then $x$ and $y=\dot x$ are two independent variables of the function $L$ and $\partial_2 L$ is the derivative of $L$ w.r.t. the second variable. Here, you need to evaluate this second derivative in a particular value (i.e. $\dot x$).

[Second answer, separately because it is different]

Maybe this will help: This independency of position and velocity can be seen in Newton's equation: it is a second order differential equation. To solve it (uniquely) for a 1-dof system, you need two initial conditions (initial position and initial velocity).

That the Lagrangian of the particle moving at small speeds can be expressed in the stated form is an experimental observation. The principle of least action limits the manner in which the particle can explore its phase space. For the application of the least action principle to determine the equation of motion, the coordinate, and the velocity would have to be treated independently then. It is possible to think of a situation where the Lagrangian would depend also on $\ddot{x}$, in which case $x$, $\dot{x}$ and $\ddot{x}$ would be treated independently. Our world does not seem to behave that way though.

2
Are these integrals of motion?
7
Euler-Lagrange equations of the Lagrangian related to Maxwell's equations
2
Derive the equation of motion from Lagrangian of a particle moving in an electromagnetic field
2
How to calculate this particle's position, velocity and acceleration, each as functions of time.
2
Determining the Lagrangian function and deriving the Euler-Lagrange equation of the following conservative system
3
Find the maximum velocity of this particle
1
Using the Principle of Least Action to find the Constant/Equation of Motion