What is the meaning of “smeared limit cycle”?

I'm reading the paper Phase dynamics of coupled oscillators reconstructed from data by Kralemann et. al. (2008), which is about representing phenomena that exhibit a stable limit cycle (i.e. non-linear systems with a periodic orbit or “limit cycle”, where nearby trajectories decay into the limit cycle) as a generalised phase oscillator. They make reference to a smeared limit-cycle, and I’m not sure what they mean with smeared. Can anyone explain this?

From the introduction of said paper (boldface mine):

For the rest of the paper we restrict our consideration to the case of weakly and moderately coupled noisy-chaotic oscillatory systems in the asynchronous regime—i.e., to the case when the amplitudes are enslaved and the phase portrait of the individual system resembles a smeared limit cycle. In this case, the coupled system can be adequately described by the phase variables.

With other word, through coupling, noise or chaos, there exist possible states that are slightly off the limit cycle, which makes the set of possible states of the system slightly more than a simple limit cycle, i.e., a smeared limit cycle. What is important for the purposes of the paper is that the coupling mainly affects the system along the limit cycle, i.e., it causes a phase offset. This assumption would not hold true anymore if the deviations from a limit cycle were stronger and the dynamics could not be adequately described by a simple phase anymore (but you would need two or more variables). 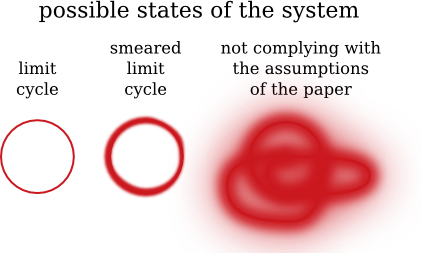 Not the answer you're looking for? Browse other questions tagged terminology dynamical-systems nonlinear-system chaos-theory or ask your own question.

0
Entrainment of linear and non-linear systems
2
Number of limit cycles: Counterexample of the extended Bendixson-Dulac criterion?
5
Periodic orbits on centre manifold
3
Analysis of frequency and amplitude at Hopf bifurcation