Difference between "space" and "mathematical structure"?

I am trying to understand the difference between a "space" and a "mathematical structure".

I have found the following definition for mathematical structure:

In mathematics, a structure on a set, or more generally a type, consists of additional mathematical objects that in some manner attach (or relate) to the set, making it easier to visualize or work with, or endowing the collection with meaning or significance. http://en.wikipedia.org/wiki/Mathematical_structure

Regarding a space, Wikipedia says:

In mathematics, a space is a set with some added structure. http://en.wikipedia.org/wiki/Space_(mathematics)

I have also found some related questions, but I do not understand from them what the difference between a space and a mathematical structure is:

Neither of these words have a single mathematical definition. The English words can be used in essentially all the same situations, but you often think of a "space" as more geometric and a "structure" as more algebraic. The best approximation to a general "space" for many purposes is a topological space, but Grothendieck generalized further than that, to what are called topoi.

In model theory a "structure" is a set in which we can interpret some logical language, which is to say a set with some distinguished elements and some functions and relations on it. Some of the most common languages structures interpret are those of groups, rings, and fields, which have no relations, functions are addition and/or multiplication, and distinguished identity elements for those operation. We also have the language of partially ordered sets, which has the relation $\leq$ and neither functions nor constants.

So you could think of "structures" as places we do algebra, and "spaces" as places we do geometry. Then a lot of great mathematics has come from passing from structures to spaces and vice versa, as when we look at the fundamental group of a topological space or the spectrum of a ring. But in the end, the distinction is neither hard nor fast and only goes so far: many things are obviously both structures and spaces, some things are not obviously either, and some people might well disagree with everything I've said here.

In my opinion, structure is the most general way of adding substance to a set. A space usually refers to something which has been topologized, is one way of adding structure.

Mathematical structure then really comes in two forms - algebraic and topological. Topological structures let you tell how your set is pieced together by special subsets, and so tells you something about the relationships between parts and the whole of the set. Algebraic structure tells you how the elements can interact with each other, and so in some sense tells you how parts relate to other parts.

In some sense then, these 'structures' are the scaffolding on which mathematics is built. It is the language we use to describe mathematical phenomena, and equips us with a way of reasoning about some abstracta, and often times just investigating the relatively simple aspects of our scaffolding can be a huge task. For this reason, it is quite literally the 'structure' of the subject.

I'm not sure I must be right. Different people have different ideas. Here I just talk about my idea for your question. In my opinion, they are same: the set with some relation betwen the elements of the set. Calling it a space or calling it just a mathematical structure is just a kind of people's habit.

I am a Wolfram language fan. I know that is not Mathematics but it offers some impressive structures. For example this relationship graph. The graph shows relationships between space classifications 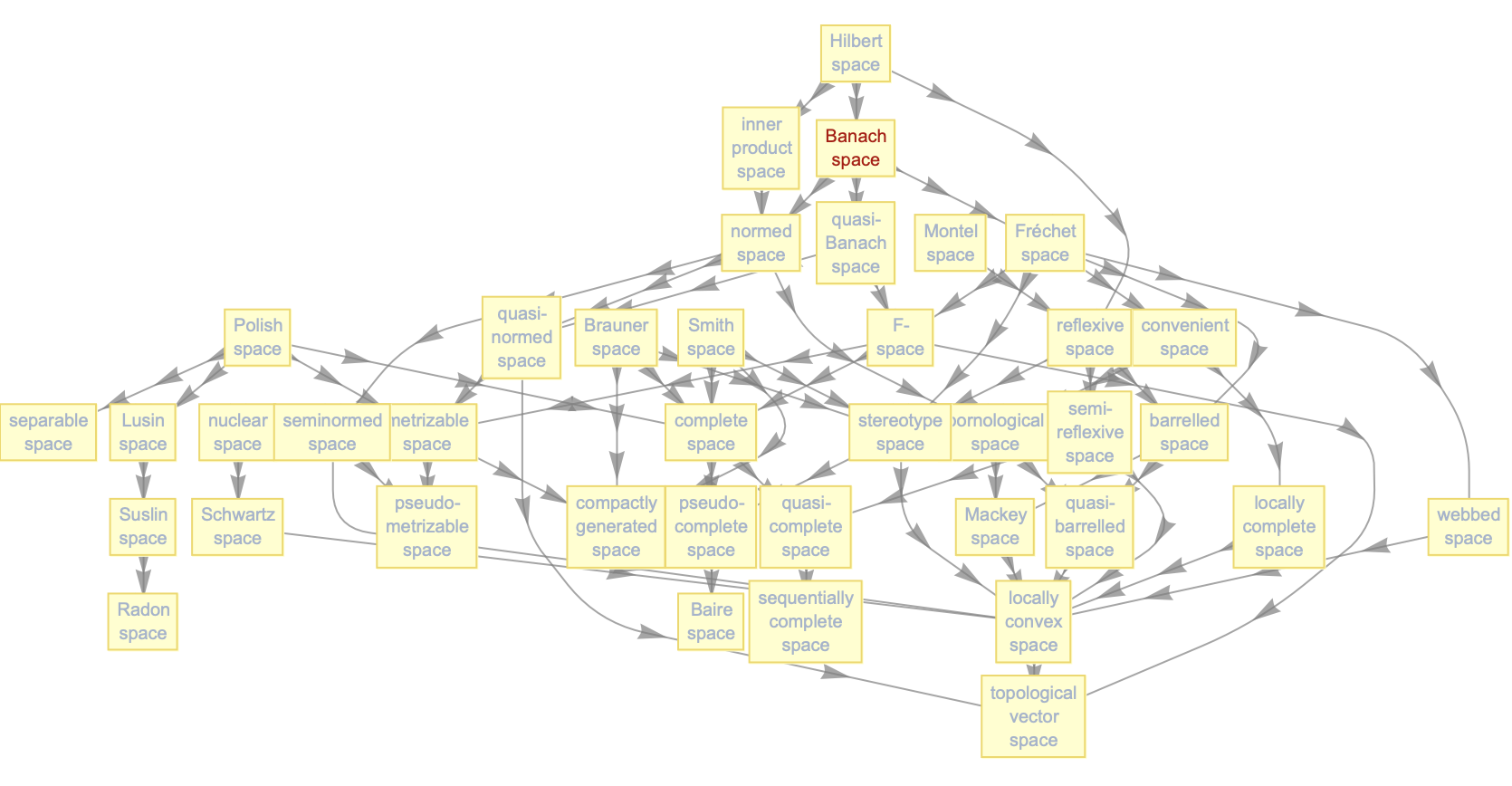 This shows not that set is already a structure with objects. A set can be as complex as the Tarski-Grothendiek universes are. There are attributes given to space classes that are taxonomical like compact, complete, local, convex, and quasi-. The quasi- prefix shows up a great dilemma in classifying spaces. There is no need in properness, soberness or alike. The orientation is unsharp.

This graph is corrupt and damage. Each arrow is expected to show a label. By this fact another problem in presenting knowledge in the orientation of systematization there is not enough time to gather them all and there are so many properties available. The attempt not to work with names but for example with popular examples runs in even more trouble because the definitions are clear the popular examples are usually not. And a lot of well distinguished spaces are not popular and therefore not easy to be understood in the orientation of use.

The human nowadays ideas of space are highly diverse and include a lot of contradictions and incompatibilities. So arising from the presence of objects or ideas for mathematical methods a set and a space can be everything. Even the idea of empty space is included despite not the graph.

The causes are mathematically hard and often use logic even specialized logic in involved. The most abstract ideas are that stemming from structuralist like Bourbaki. These are under extended critics because structure is not always something regarded as positive or desirable. It may hinder solving problems or even stopping solutions. Space, sets, structure are coming together and in the moment with can distinguish these the problems are present. Empty, finite or in several kinds infinite space is causing trouble.

Not the answer you're looking for? Browse other questions tagged terminology or ask your own question.

11
What does a space mean?
14
Difference between "space" and "algebraic structure"
3
Calling a space a set - abuse of terminology?
1
Convex Set or Convex Space?
0
Is it true that all spaces in math are either topological spaces or vector spaces or both?
1
Terminology - "Sample space" vs "sample set"?