What does it mean that log-normal distribution is positively skewed?

I'm writing an economic overview and I need to get an explanation in the context of log-normal distribution being derived from the idea of multiplicative influence of factors and in order to explain an example below.

The model where factors are considered being accumulated by multiplication is usually selected when the growth of the variable is proportional to its value. When the factors are accumulated additively, central limit theorems tell us that the distribution of sums will tend to normal. In the case of multiplication, we can take take the logarithm of the product and apply CLT to the sum of logarithms, thus obtaining log-normal distribution.

Imagine, we have a product series, e.g.

where $u_i$ are compounded factors with some distribution. If $u_t$ makes the process $S(t)$ to jump down, multiplying it by 0.5, then іn order to return $u_{t+1}$ needs to equal $2$ on the next step which has less probability (perhaps unless if the distribution is not significantly positively skewed).

The log-normal distribution has positive skewness that depends on its variance, which means that right tail is larger. The expectation also equals $\exp(\mu + \sigma^2/2)$, which means that log-normal variable tends to be dragged into bigger values as variance grows. However, it should inherit the above property that if one factor makes series to jump down, it makes hard for them to resurrect, i.e. negative skewness.

Where I am wrong?

EDIT2: This is my previous example to make sure I haven't misunderstood something:

The economic process consists of log-normally distributed returns $S_t/S_{t-1}$. If I understand correctly, in the case of the compounded return of two return series with the same arithmetic mean, but different variance, the series with a lower variance has a higher compounded return (and geometric mean). The reason is that if an investment looses 50% of its value, it has to make a return of +100% (very different from +50%) to come back to the initial value. In other words, if the process jumps down by an amount 0.5, it needs to achieve 2 on the next step which has less probability (perhaps if the distribution is not significantly positively skewed).

I see a couple things that may be contributing to your confusion:

For the first one, I'll give an example:

Lets say that a stock starts at value $S_0$ and is subject to an iid sequence of multiplicative returns $r_i$ to get a future value $S_N=S_0\prod_1^N r_i$. You correctly pointed out that if we take logs, we can show that $S_N\dot{\sim} \textrm{Lognormal}$ to a reasonable degree of accuracy for sufficiently large N.

However, let's say that we want the one-step forecast. There is no reason to believe $S_1$ will be lognormally distributed, as I would be skeptical that convergence is adequate here. So, the short-term behavior of a stock need not have the same skew, just like the iid sum of even highly skewed RVs can approach a symmetric Gaussian.

For the second case, look at the shape of a particular lognormal: 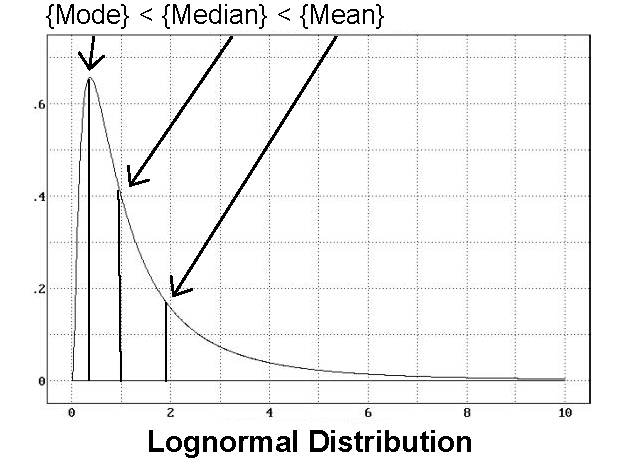 Therefore, skewness does not mean "heavy tailed", and the "heavy tailed-ness" of a distribution has less to do with the amount of probability in the tails (which is a vague concept) than with how the tails decay towards $0$.