What does that mean? I don't understand what $\xi$ is and why the remainder is equal to that. Is there some geometrical proof?
Thank you for your time.

I see that this is a pretty old question, but here goes anyway.

The main problem with a geometric approach is that we are often dealing with very high order derivatives. Just by looking at a graph we can easily get a sense of such geometric interpretations as value, gradient and concavity - corresponding respectively to $f^{(0)}(x)$, $f^{(1)}(x)$ and $f^{(2)}(x)$ - but after that it starts to become a struggle to interpret function behaviour visually.

Having said that, if we choose $f(x)=e^x$, for which $f^{(k)}(x) = e^x$ for all $k$, we can produce something of a geometric interpretation of the Lagrange error term, especially if we start off with low degree Taylor polynomials for the approximation and incrementally incorporate more terms from the series into the polynomial approximation. 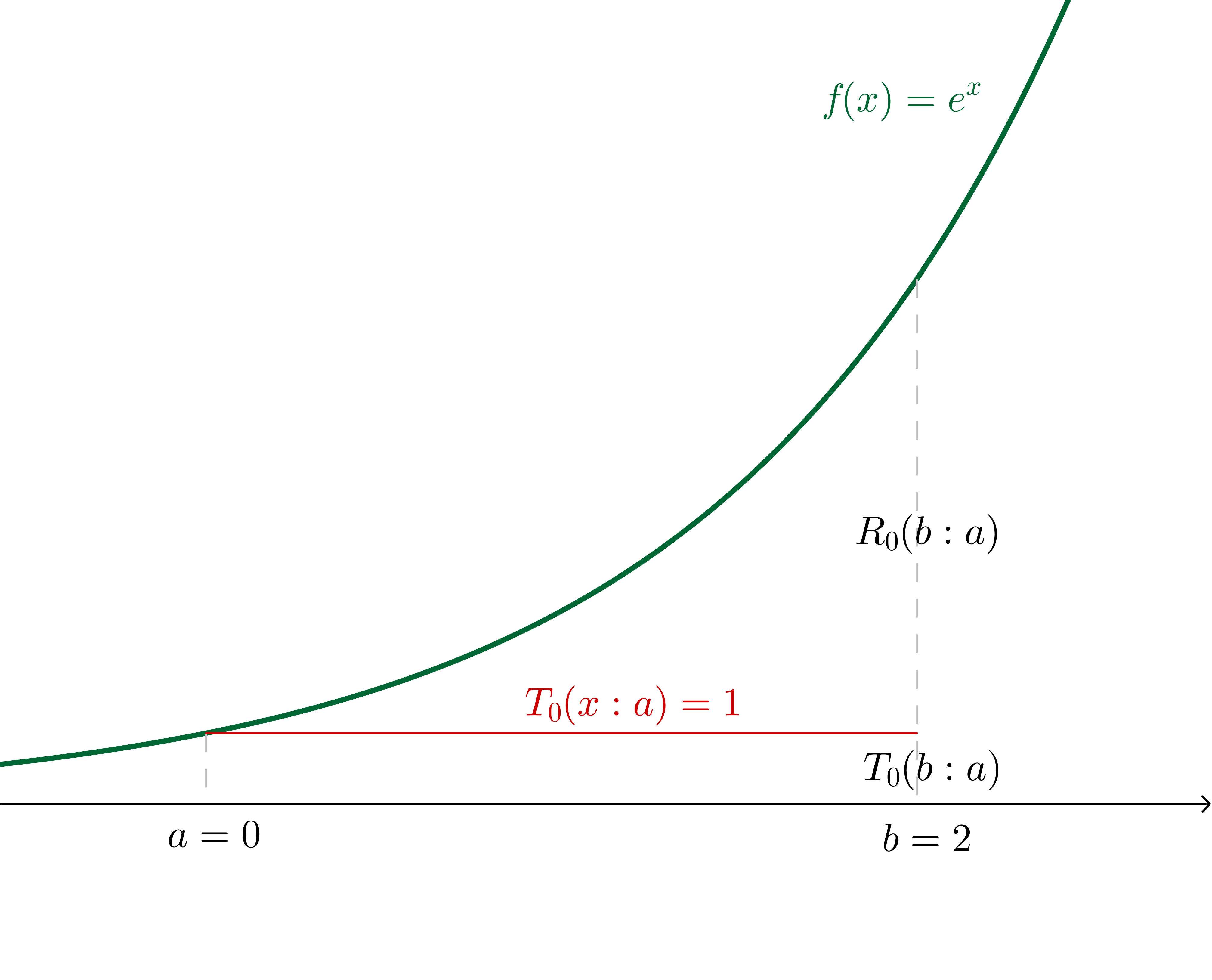 In this particular example, where we have specified the values, we can calculate $c$: 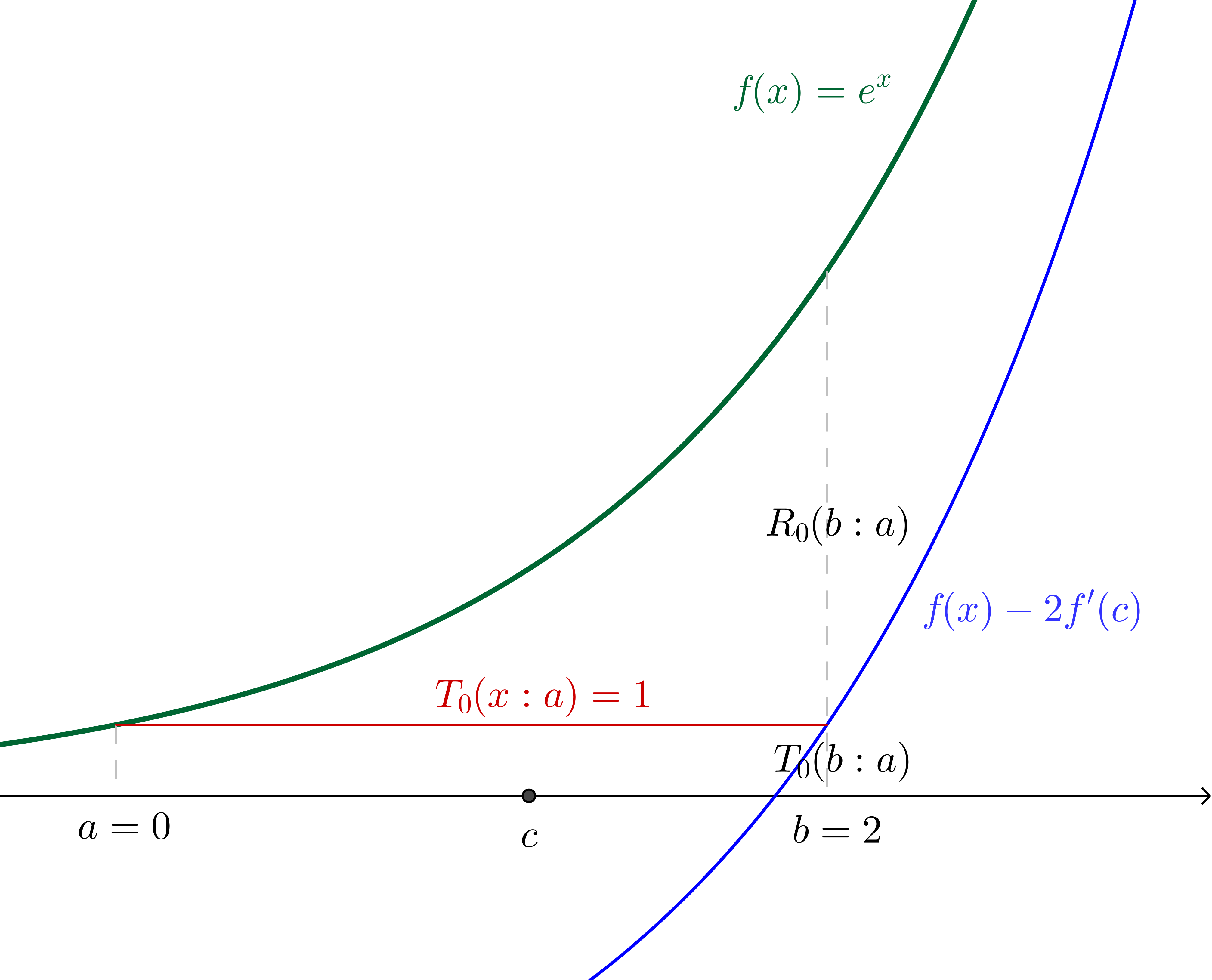 Since we have specified all values we can again calculate $c$, which, together with the graph of $f(x)$ translated down by twice the concavity of $f$ at $c$ (which, since we're using $f(x) = e^x$, is twice the value of $f$ at $c$) is illustrated: 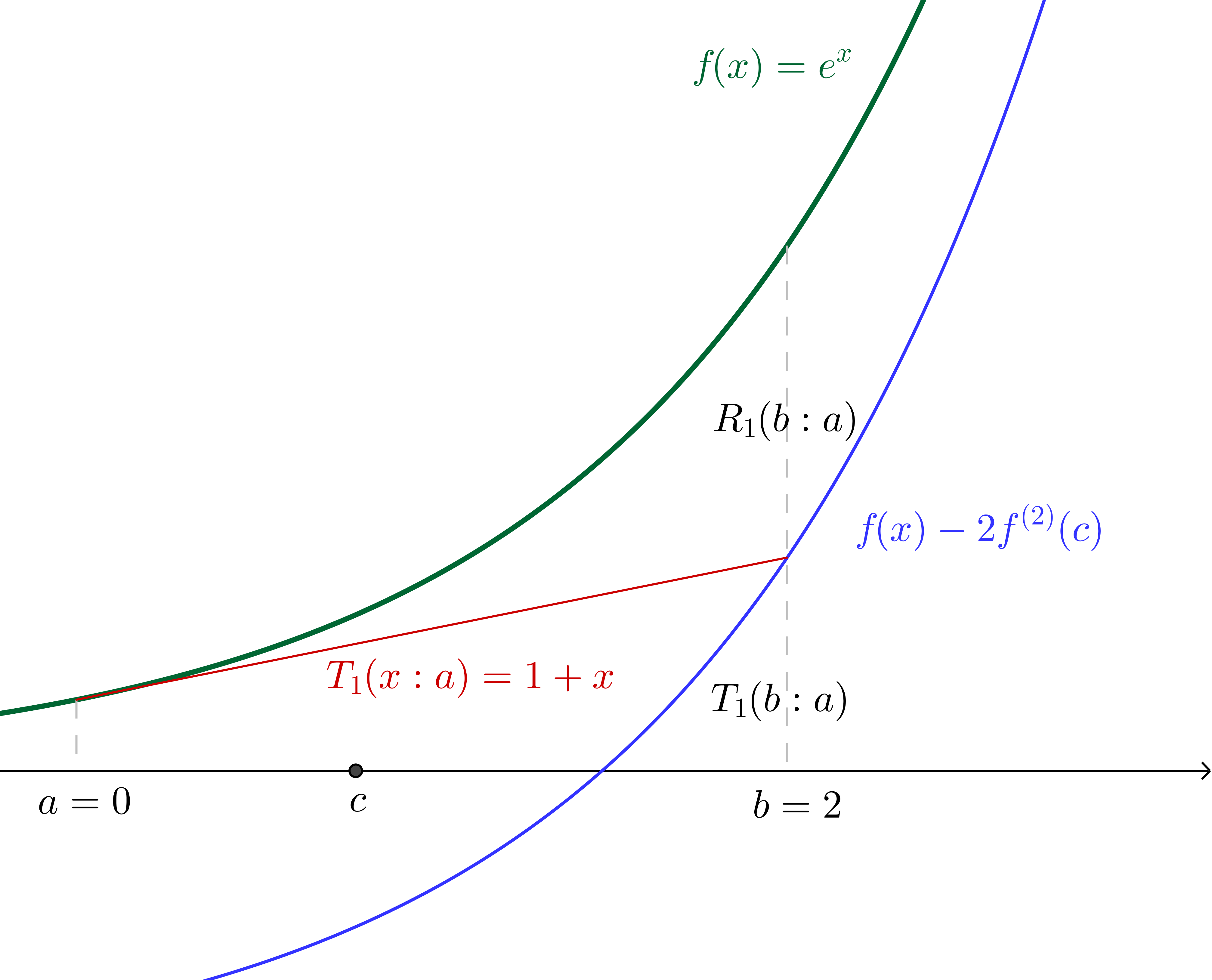 Of course, we can continue on similarly from here (though we have to now pay a little more attention to the factorials in the denominators), incorporating successively more terms from the Taylor series into the Taylor polynomial. The nice thing about using $f(x)=e^x$ is that we will always be able to interpret derivatives evaluated at $c$ as the height of the curve above the $x$ axis at $c$, which would not be the case with other functions.

Not the answer you're looking for? Browse other questions tagged power-series taylor-expansion or ask your own question.

7
How to use the Lagrange's remainder to prove that log(1+x) = sum(…)?
0
Taylor series of $\sin(x)$ converges uniformly on $[-\pi,\pi]$?
1
When does the remainder term in the taylor series go to zero?
4
Another question about $x_0$ in the Taylor series
4
Why Does The Taylor Remainder Formula Work?
0
Other representation of the Lagrange remainder
0
Remainder in Taylor expansion
4
Understanding Taylor series error function and Lagrange error bound
0
Taylor-Remainder divided by $(x-x_0)^n$ goes to zero as $x$ approaches $x_0$.