What would the equation to this graph look like?

I have an equation built from obscure (step) functions, which I'd like to approximate in standard mathematical functions; it is quite lengthy and produces an odd geometric shape, which I cannot decipher:

Might someone assist me in finding an equation roughly following this shape? Many thanks.

By "non-obscure functions", I intended for any function built from standard operators (addition, subtraction, multiplication, division, powers) and trigonometric functions. The absolute value function may also be used, though it would be preferable if fractional part functions, sigma notation, etc. were not included - really anything seen below highschool-level precalculus.

The function isn't so hard to understand.

The blue curve is the difference between the two, shown here with amplitude magnification. 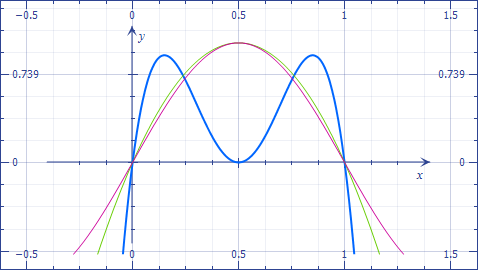 Now the function repeats with period $1$, so that you should replace $x$ by its fractional part $x-\lfloor x\rfloor$, which we can denote $\{x\}$. Your equation is equivalent to

If you don't like the sine, you can replace the function with a quartic polynomial of similar characteristics, evaluated at $\{x\}$

The deviations depend on the number of terms $n$.

The maximum error lies around the integer values of $x$.

Not the answer you're looking for? Browse other questions tagged graphing-functions or ask your own question.