How do squares of non-right triangles relate?

How do squares of the sides of a triangle, any triangle, relate?

The general rule that relates the sides of a triangle is called the law of cosines. It regards the following situation, where you know an angle of the triangle and want to relate the side lengths: 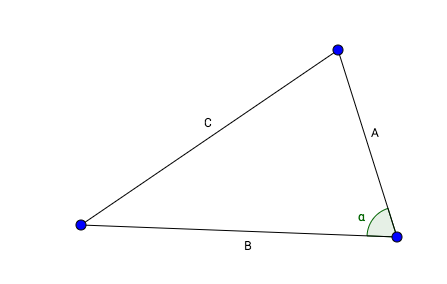 It is stated as follows: $$C^2=A^2+B^2-2AB\cos(\alpha).$$ Note that this has a very similar form to the Pythagorean theorem - just with an extra adjustment for the angle $\alpha$. In particular, if $\alpha$ is a right angle, this last term is zero, so it reduces to the Pythagorean theorem. The equation also tells us that when $\alpha$ is obtuse, the opposite is longer than it would be in a right triangle and when $\alpha$ is acute, the opposite side is shorter.

Sorry for the short answer.

Cosine Rule, whose special case is the Pythagoras theorem.

4
Compare the sum of the squares of the median of a triangle to the sum of the squares of sides
1
Simple Question on Triangles…
8
Are all triangles where “$a^2 = b^2+ c^2$”, right-angled?
5
How to find the number of right angled triangles with integer sides and inradius 2009 ..
1
Proof of a set of triangles and unit squares
1
Observations on integer-sided right triangles
2
Can the Pythagoras theorem be applied to other polygons apart from squares in relation to right angular triangles?
4
Drawing squares on the sides of a right triangle,joining the vertices and so on…
0
Number of Integer sided triangles