This question is about the notion of a connection with torsion in differential geometry, i.e., a connection that is not Levi-Civita. (It's not about the torsion of a curve in three dimensions.)

Is there any mathematical reason why torsion in two dimensions is impossible, dull, or trivial?

It would seem that if $\tau_{abc}$ is only required by definition to be antisymmetric on the two final indices, not all three, then you have 2 independent quantities, $\tau_{112}$ and $\tau_{212}$. Geometrically, I'm not clear on why there are two independent quantities and not just one. It seems to me that the only intrinsic quantity should be the failure of a parallelogram to close, and this should only give one degree of freedom, since I don't think the orientation of the parallelogram can make a difference in two dimensions. (A 90-degree rotation is the same as interchanging the two axes, which won't give an independent result.)

If there is no mathematical reason why the 2-dimensional case doesn't work, are there any interesting real-world applications of torsion in two dimensions? Failing that, I would still be interested in any discussion of mathematically interesting, simple examples in two dimensions, e.g., a discussion of what phenomena occur in a flat space with constant torsion, or a space of constant curvature with constant torsion. For example, I suppose that in the flat case with constant torsion, curves of extremal length are lines, whereas curves that parallel-transport their own tangent vectors are circles. In the positive-curvature case, I haven't thought this through carefully, but it seems that constant torsion on a sphere would be impossible due to something like the hairy ball theorem.

Are there simple models of such geometries, in roughly the same sense that elliptic geometry can be modeled by identifying antipodal points on a sphere? (I know that you can't model a two-dimensional space with torsion in exactly this way, since all you naturally induce is the torsion-free structure.)

Here is a 2D example with a picture: 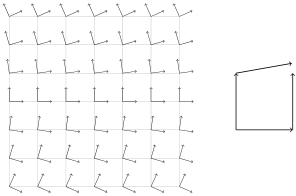 On the left hand side, I've parallel transported the unit frame from the origin to a bunch of lattice points. On the right hand side, I've shown (as you say) the failure of a parallelogram to close.

This connection has zero curvature, as you can see by parallel transporting a vector around a coordinate rectangle: the rotation up one vertical side is exactly canceled by the counter-rotation down the opposite side.

I wrote the torsion coefficients with one index up, since I don't know what metric you'd want to use. This is not, as you say, a Levi-Civita connection. Since the connection is flat, I suppose the most natural metric would be the standard Euclidean $g_{ij}=\delta_{ij}$. Curves of extremal length would be lines, as you say. However, circles do not parallel transport their tangent vectors. A circle of the proper radius would start doing that if you begin at the rightmost point and go upward. But at the top and bottom, the tangent vector is still turning while parallel transport does not induce any rotation w.r.t. xy coordinates.

I don't know of any practical applications of this example, but Frankel, in The Geometry of Physics (3rd ed., p.252) mentions something similar in geodesy:

Surveyors could introduce a frame of 3 orthonormal vectors in a small 3-dimensional neighborhood of a point on the irregular Earth’s surface as follows: ${\bf e}_3$ is an upward pointing unit vector defined by a plumb line, ${\bf e}_1$ is a horizontal unit vector pointing magnetic north, and ${\bf e}_2 = {\bf e}_3\times{\bf e}_1$ points “west.” It is thus natural for surveyors to introduce (locally) a distinguished frame of vectors defining a distant parallelism with curvature 0, and this frame is not associated with any coordinate system; the torsion does not vanish!

Frankel gives a reference to an article I haven't read:

I hope this all helps.

Not the answer you're looking for? Browse other questions tagged applications differential-geometry or ask your own question.

4
Is torsion even useful?

2
What is the torsion and curvature in modern language?
0
Differential equation of space curve with given curvature and torsion
1
Congruence of two curves with an arbitrary speed?
0
Show that a curve has constant curvature and constant torsion.
2
Torsion vs. Curvature
15
Torsion of a connection as an obstruction to integrability
4
Is torsion even useful?