Via geogebra I was able to determine that the ratio of the yellow line to the blue line is the golden section. It gave me a number of 1.619... which is close enough I believe to the golden ratio ~1.618...

Then, I thought I saw a circle implied by the arrangement. Curiously enough, the radius of the circle in the lower figure seems to be exactly 3/4 of the length of one of the lines. Is there some way to prove this in geogebra?

I really do think that geogebra allowed me to determine that the horizontal line is cut into the golden ratio of yellow and blue lengths by the red line. And it looks like the entire golden ratio construct can be naturally inscribed in a circle with a radius of 3/4 of one of the lines. Are there any other cool relationships this implies?

Thanks again for all the help, and thanks for the geogebra tip from Blue. I look forward to working with it! 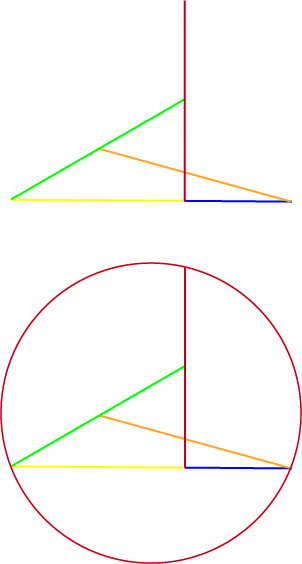 The radius of the circle you've constructed is close to $3/4$ of the length of the starting segments, but not exactly. For ease of calculation let's assume the starting segments are $2$ units long. Apply Pythagoras' theorem to find that the yellow segment has length $\sqrt 3$ and the blue segment has length $b:=\frac12(\sqrt{15}-\sqrt 3)$. The ratio of these is $2/(\sqrt5-1)=(\sqrt 5+1)/2$, which indeed equals the golden ratio.