Show that the ratio of the length of the blue segment to the green segment is the golden ratio 1.618. (Is it? It seems so!)

I have been playing around in geogebra, but I was unable to get the circle tangent to the triangle as shown in the figure, which I drew in Adobe Illustrator. Any geogebra assistance would be appreciated! How do I move/translate a simple object in such a manner? I am used to dragging and dropping it in Adobe Illustrator, but geogebra is much better suited to these golden ratio conjectures. Thanks for all your help! I have been successful with geogebra with a couple other constructions which I will share soon. :)

Here is a diagram of the situation. 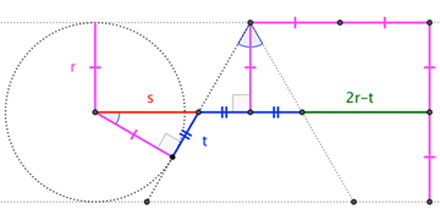 If you draw the radius of the circle to the point where the circle is tangent to the triangle, it is one leg of a $30$-$60$-$90$ triangle with part of the the blue line as the hypotenuse. That triangle is congruent to one of the small right triangles you can see in the upper part of the equilateral triangle. So the portion of the blue line between the center of the circle and the near side of the equilateral triangle is equal to the hypotenuse of one of those right triangles, which is $\frac12 s$.

(That figure should also show you how to construct the figure in Geogebra: from the lower left corner of the equilateral triangle, construct a line parallel to the opposite side of the triangle; the blue/green line of course is parallel to two sides of the square and halfway between them; and the center of the circle is at the intersection of those two lines.)

This is not the proper description of the Golden Ratio. The definition of Golden Ratio involves a rectangle which gives a similar rectangle after a square is cut off from it.