BEDMAS where the order of Addition before Subtraction matters?

Here is a recent "tricky problem" that is making the rounds on FB: 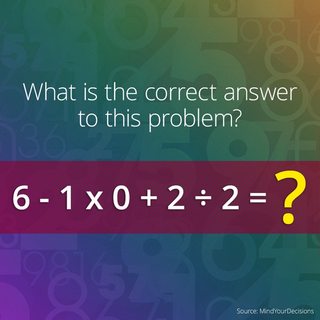 BEDMAS is explained here in a video, with this being the upshot:

I tried to explain it as

But alas, adding a sign, the other party was unconvinced (and very smug).

Question: How to justify to a non-mathematician that the answer is in fact 7 following BEDMAS? Or is the above the only way?

Research: This question was very similar, but the resolution hinged on a grouping mistake and isn't applicable here.

Note: I thought about posting in Math Education, but this leans more towards a proof, I suppose.

"A, then S" is a misunderstanding of what BEDMAS stands for.

The priority of operations is as shown in the video:

The reason addition and subtraction are listed on the same line is because they have the same priority. Notice that they didn't even bother to list multiplication and division in the same order on the line as they occur in the acronym, because it makes no difference.

I somehow managed to make it through the U.S. math education system without having been scarred by the use of these acronyms, so I can look at them and figure out what they mean based on how standard arithmetic really works, rather than the other way around.

To be honest, I never thought of BEDMAS or all other acronyms Americans seem to use.

Adding and subtracting have the same priority, just like multiplying and dividing, because they really are just the same thing.

Imagine a world in which BEDMAS does not exist and where it is necessary to denote exactly in which order the operations in an expression are evaluated, using parentheses. A valid expression looks something like this:

Look at this expression. It has four operations and four sets of parentheses. Every set of parentheses belongs to exactly one operation and vice versa.

Now consider a large expression. What if you don't want to write all these parentheses all the time? What if you want large expressions to be easier to read? Wouldn't you think of ways to reduce the amount of parentheses and general symbols you need in such a way that the resulting expression is still unambiguous? Well, mathematicians would. And that's why there is BEDMAS.

First, let's consider expressions that use only $+$. Consider the expression $((a + b) + ((c + d) + e))$. This expression has enough parentheses for the order of operations to be uniquely determined. But there's a nice property of $+$: For any numbers $a, b, c$, it always is the case that $(a+b)+c = a+(b+c)$. This is called the law of associativity. Now if we have a bunch of sums of sums, we can just leave out the parentheses between them, because no matter how you put them back in, you always get the same result. Our expression simplifies to $a + b + c + d + e$. Great, we've already got rid of a lot of parentheses.

As a consequence, we can invent a new way to hide parentheses. In a term where multiplication and addition are next to each other without parentheses, we agree always do the multiplication first. This way is great, because when we use this, we can actually write any term using $+$ and $\times$ without any parentheses at all!

Using the law of distributivity, we can rewrite

There's a lot of operators here, but if we agree to do multiplication first and remember the law of associativity, we get

which does not contain any parentheses at all! This would not always be possible if we evaluated from left to right or addition before multiplication.

Now let's add subtraction. First, let's remember that there is a unary minus sign that goes left of an expression, for example $-a$ is shorthand for $(0-a)$. Consider a term of additions and subtractions:

So let's just agree that unparenthesized addition and subtraction are executed left to right. We get

This has the advantage that with this notation, you can actually rewrite subtracting as adding negations using the unary $-$:

This method therefore makes a term much more easy to read and understand, and this allows us to reorder the summands in this sum much easier.

Now let's come to division. Consider a term mixing multiplication and division. Just as we had for addition and subtraction, we can reorder the parentheses so that the operations are executed from left to right, using perfectly analogous laws $a \times (b \div c) = (a \times b) \div c$, $~a \div (b \times c) = (a \div b) \div c$ and $a \div (b \div c) = (a\div b) \times c$.

We now agree to drop the parentheses when the operations are in fact executed from left to right. So

Again, we can interpret division as multiplication with the inverse:

So this description is much easier to work with, for example we can reorder this very easily.

When division is mixed with addition or subtraction, we say that division is always executed first by default.

Now note that terms using $\div$ cannot always be written without parentheses, for example $a \div (b + c)$.

Because of this, mathematicians actually don't use the $\div$ symbol anymore. Instead, they use the fraction notation:

$$a \div b = \frac{a}{b}$$. The nice thing is that we can draw the horizontal line in the middle as long as we want, and that the line clearly separates what's above the line from what's below the line. So we can drop some more parentheses:

Clearly we can tell the difference.

Consider the term $((a + b) \times (c \div (d - e)))$ from the top of my answer. It has four sets of parentheses, which we can now technically all avoid by using proper notation and expanding using the distributive law:

Note that this expression would still usually be written as

since this is actually easier to read and understand. We haven't forbidden parentheses after all, we've just made ways to avoid having to write them.

Now be aware that since nobody out of school actually uses $\div$, precedence of $\times$ and $\div$ is not actually known common consensus. This means that we do need to use parentheses when a $\div$ comes before a $\times$, just so people don't get confused.

Now we can finally have a look at the term in the picture of your question:

If we replace the parentheses using the rules we've established, we get

which should now be perfectly unambiguous.

The rules we've established, as you might have guessed by now, are exactly BEDMAS (or rather BDMAS, since I didn't talk about exponentiation).

Note that if you just punch the given term into a calculator, you won't get the same result, because the calculator evaluates the operations in the order they're punched in, not in BEDMAS order. So a calculator sees

which is clearly a different result. So just remember that calculators can't do BEDMAS and you're good to go.

What is the result of this expression? By common agreement, we do the division first, but again, technically we should have added parentheses because the agreement is not common enough knowledge. Or we could just use the fraction notation instead of $\div$, in this case we would get two different expressions:

So here we can clearly see the intended order, and all is well again.

BIDMAS ALWAYS applies, if you insit on adding 1 first, you should do -0+1 because the negative "belongs" to the 0.

Not the answer you're looking for? Browse other questions tagged recreational-mathematics education or ask your own question.

7
Does the order of operations matter with just addition and subtraction?