Trivialised sub-bundle of a trivialised bundle and its orthogonal bundle

I'm reading Kirby's The Topology of $4$ Manifolds, and I encountered the following claim:

How can I prove it?

What I did: My first thought was to use the characterization of Stiefel - Whitney classes as obstruction classes, but when we are dealing with $n$-frames in an $n$-plane bundle, the first class only detects a trivialisation on the $1$-skeleton, (an orientation), and the higher classes detect the presence of $n'$-frames ($n'<n$) on higher skeleta.

The results (that I'm aware of) about extending the $n$-frame on the $1$-skeleton to higher skeleta fail to apply since the fibre ($ V_n(\mathbb{R}^n)\cong GL_n(\mathbb{R})$) is not $k$-simple for any $k$. The other approach with obstruction theory was to try proving that the classifying map $f\colon B\to BSO(n)$ is trivial when restricted to the $n-1$ skeleton (that should prove my claim). Even though BSO(n) is simply connected, I don't know higher homotopy groups of it and therefore can t apply obstruction theory.

I tried applying even the prolongation theorem from Husemoller, page $21$, but the fibre is not $m-1$-connected for any $m$, since it is $GL_n(\mathbb{R}^n)$.

From the hypothesis it's easy to see that the Stiefel-Whitney classes of the orthogonal bundle all vanish, but by the remark before, I can't use this information.

What I found strange (about my approaches) is that I'm not using that our bundle is the orthogonal complement of a trivial subbbundle and the "total" bundle where they live is trivial. That's why I fear I'm missing something

Could someone provide me some hints about this claim?

By choosing $E=\mathbb{R^n}$ you get the thesis. Another way of stating the problem is the following:

from the book "Differentiable Manifolds"-Kosinski (page 170). It relies on proposition 1.1 (same book): 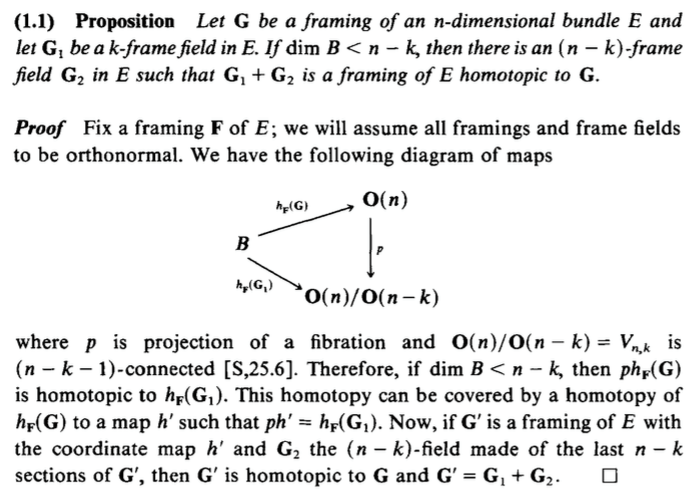 Not the answer you're looking for? Browse other questions tagged algebraic-topology vector-bundles obstruction-theory or ask your own question.

4
Trivializations of Tangent Bundle over 1-skeleton that do not extend to 2-skeleton, etc. Examples
22
When characteristic classes determine a bundle?
2
Frame bundle of orthonormal frames orthogonal to a submanifold.
2
Orthonormal frame bundle orthogonal to a curve
4
Lifting the classyfing map and characteristic classes
3
Identification of obstructions arising from extending isomorphism between two $U(2)$-bundles over $X$
3
Chern classes, classification of bundles, and Bockstein morphism
2
Stiefel manifold as a fibre bundle over another Stiefel manifold.