Fundamental group of a wedge sum, in general (e.g. when van Kampen does not apply)

What is the fundamental group of a wedge sum in general? e.g. including the times when van Kampen cannot help us.

The Wikipedia article on wedge sums mentions that

This seems strangely worded. The conditions on the space for van Kampen are that it is

(I fix a basepoint for the rest of this question, all wedge sums are identified at this basepoint.)

Back to wedge sums. If we are looking at the wedge sum $\bigvee_\alpha A_\alpha$ where each $A_\alpha$ is path connected, then these conditions are obviously true. And since the intersection of any $A_\alpha$ is trivial, the fundamental group of the wedge sum is the free product of the groups.

The simple example I scrawled on my piece of paper is below. I figure the fundamental group is $$\pi_1(\mathsf{Green}\vee\mathsf{Blue}\vee\mathsf{Red})=\Bbb{Z}\ast\Bbb{Z}\ast C_1=\Bbb{Z}\ast\Bbb{Z},$$ which makes sense, no loop at the basepoint can be in the leftmost or rightmost components, they must be (homotopic to a loop) in the figure eight graph. 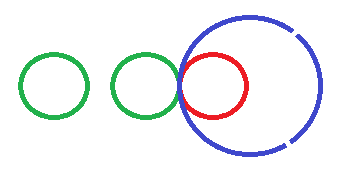 P.S. a side question, why do we use \vee for the wedge sum rather than \wedge?

Under certain conditions they do actually mean the existence of neighborhoods, containing the common point $x_0$ of the wedge, which do retract on $x_0$.

With this condition we are able to choose suitable open path-connected sets $A_i$ to compute the desired fundamental group.

Now by applying Van Kampen you get that the fundamental group of your wedge sum is free abelian of rank $n$.

Notice that this specializes to something like the following:

Now condition (1) explains why we need to be careful about wedge products; the subspaces $A_0$ and $A_1$ must be open in $X$. Thus your desired result about fundamental groups of wedge products has the following formulation for a sufficient condition:

This can be proved using induction and the stated version of the SVK Theorem above.

As for wedge-versus-vee, that seems to be an unfortunate product of historical stuff...

Not the answer you're looking for? Browse other questions tagged general-topology algebraic-topology or ask your own question.

1
Fundamental group of wedge sum not equal to the free product
1
Van Kampen on two tori joined at a point.