I was given steps to construct a figure:

1.) Construct a horizontal ray AB and a segment AC at an angle to the ray. Locate point D anywhere on ray AB and construct the segment CD.

2.) Construct the angular bisectors of angle ADC and ACD.

3.) Construct the intersection of E of the two bisectors.

4.) Construct the perpendicular of ray AB to point E.

5.) Construct the intersection of F of the perpendicular and AB. Construct the segment EF and then erase the two angular bisectors.

6.) Construct a circle with center E passing through F (this circle should appear tangent to both rays and CD)

I constructed the figure, I want to make sure it is correct.

Also, I'm not entirely sure how to prove that E lies on the bisector of angle BAC. Any ideas would be appreciated! 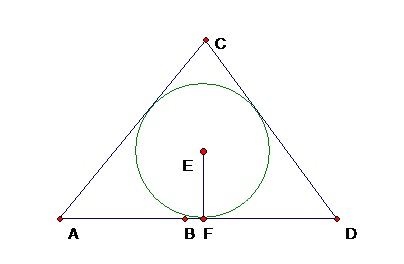 You are essentially asking for a proof that the three angle bisectors of a triangle are concurrent. The proof is easy.

Hence it is also equidistant from the lines $AC,AD$. Hence it lies on the bisector of $\angle CAD$, otherwise known as $\angle BAC$.

Not the answer you're looking for? Browse other questions tagged geometry circles triangles proof-explanation angle or ask your own question.