Problem with basic definition of a tangent line.

I have just started studying calculus for the first time, and here I see something called a tangent. They say, a tangent is a line that cuts a curve at exactly one point. But there are a lot of lines that can cut the same point just like shown in the picture- 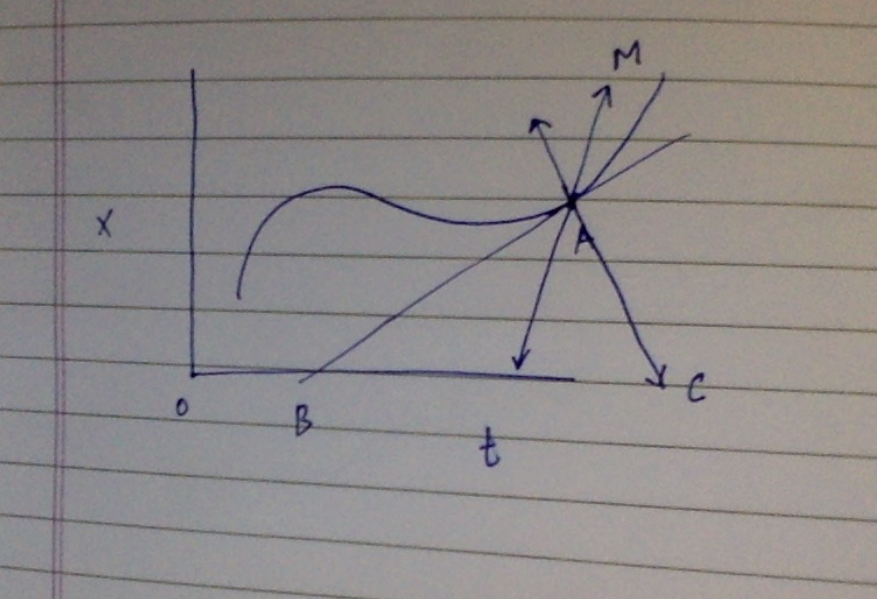 WHY aren’t we saying that lines M and C are also tangents?

What is the real definition of a tangent line?

“ A tangent line is a line which passes through two infinitesimally close points” Is this definition correct? Thanks!

Animations showing that the limit of a secant as the variable point tends towards a fixed point becomes the tangent line.

First, when the variable point (in red) approaches the fixed point (in black) from below:

Second, when the variable point approaches the fixed point from above:

In both cases, the secant line becomes the same tangent line. This suggests that the derivative is well-defined at the black point (which is highlighted in green when tangency occurs).

For a smooth curve, at any point we can calculate its curvature with a circle. The line tangent to that circle is the tangent line to the curve.

This is informal since it begs the question of what it means to approximate the curve. The way this is answered is through the definition of the derivative. We approximate the curve with a line passing not just the point of interest, but also a second nearby point on the curve. Then move the second point towards the first. On a well-behaved curve, the closer the second point comes to the first, the angle of the line will approach a particular angle, which represents the tangent. The derivative is just a means of expressing this idea exactly.

They say, a tangent is a line that cuts a curve at exactly one point.

No, it's a line that touches at one point.

Just imagine the curve is the skin of a part of your body and the lines in questions are knives. The tangent is the one that doesn't hurt.

It only touches the part it is lying on. Say for example your hand. It may be that if it was of infinite length, it might pierce your chest, but for the purpose of the definition, a tangent is a very short knife that touches your body at some point without piercing the skin.

Maybe a better definition of tangent line assumes knowledge of the derivative: the tangent line to the graph of $f$ at a point $(a,f(a))$ is the unique line through $(a,f(a))$ with slope given by $f'(a)$.

The characteristic property of the tangent line to a curve at a given point is that it is a line that best approximates the curve near the point.

This means that, given any other line, you can find a neighbourhood of the point (a disk centered at that point) where the tangent line is always closer to the curve than its contender.

By the way, someone mentioned the notion of circle of curvature. The same reasoning can be applied, only now we accept also circles besides lines to approximate the curve.

To answer your question whether A tangent line is a line which passes through two infinitesimally close points it is worth pointing out that this was Leibniz's original definition of the tangent line in the first publication on the calculus that appeared in 1684, entitled Nova Methodus, etc. This is still the best definition we have, but we need to take care to explain what this means.

For example, if you take the curve $y=x^2$ and want to find the tangent line at the point $(1,1)$, you can take the infinitely close points $1$ and $1+dx$ and evaluate the function there, obtaining the values $1$ and $1+2dx+(dx)^2$. The line passing through these two points will have slope $2+dx$ by an easy calculation. Since the term $dx$ is inassignable in Leibniz's terminology, it is suppressed to obtain the final answer $2$ for the slope.

In modern infinitesimal framework developed by Abraham Robinson, this is accomplished by the application of the standard part principle, which says that every finite hyperreal is infinitely close to a unique real number.

Thus a rigorous definition of the tangent line requires knowledge neither of the derivative nor the calculus and rather precedes and motivates both, as it did historically. See Keisler's textbook Elementary Calculus for details.

If you accept the intuitive notion that a curve has two sides (see for example the Jordan curve theorem), then you can define the tangent line at a point $P$ on the curve as a line which, in a sufficiently small neighborhood of $P$:

1 . Passes through $P$ and no other point of the curve

But, obviously, that is not a rigorous definition. It's not even close.

This hints at calculus to come-- namely that "smooth" curves will have instantaneous rates of change and it makes sense to talk of them.

But I do think this concept provides the mechanics of deriving the tangent line and defining the derivative... once the fundamental concepts of calculus (limits and infinitismals) are established.

The way I was taught and found very useful from an intuitive point of view is the idea of "zooming" in on the point you'd like to find the tangent of on the curve.

The idea is basically the same as the Intuitive description of a tangent on Wikipedia, (the page is worth a read for info on tangents) but take this further by imagining what the curve looks like at this scale (when they say "nearby point" at $a + h$, imagine h is a value that gets smaller and smaller while never reaching $0$, a very very small value).

If you can now find an equation (of the form $y = Cx + D$, a straight line) that corresponds to the "straight" part of this curve at point $a$, you've found the tangent line for that point. Technically, this line only intersects with the curve at point a, but at this scale the line and the curve will appear to be the same.

From this you may be able to get the idea that the value of the rate of change on the curve at any point is just the slope of this tangent line at that point.

I am not going to talk about the definition or the formal way to describe a tangent. But this is how tangent line made more sense to me when I learnt it for the first time. Let's say, you need to find the tangent of a point P in the image below. Now take that point and any other point Q on the graph and join them with a line. Now bring the point Q closer and closer to the point P. When the two points are so close that they are almost the same point, then you end up with a line which is the tangent line of the point P 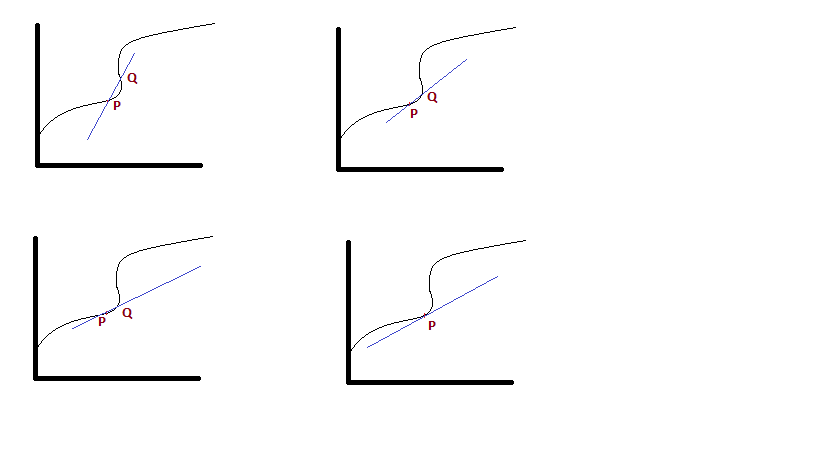 That definition just does not work.

A first attempt to fix it would be to say that locally, the tangent line and the curve only intersect once. Even then, by that definition, two intersecting lines would be tangent to each other.

A more intuitive, but not rigorous, definition would be to say that the line, $\tau$ is tangent to the function $f$ at the point $(a, f(a))$ if

The major idea is that the tangent line, $y = \tau(x)$ is, locally, the best linear approximation to the curve $y = f(x)$ at the point $a$. There is, in fact, a formal definition of derivative in more complicated spaces, the total derivative , which says exaclty that.

With respect to rotating arrow lines you drew, $B$ has zero or minimum slope and $C$ has maximum or infinite slope.

Like imagine what you drew was an orange you are cutting with a knife all the orange will be cut for $C$ arrow direction but only a thin 1 inch round circle around tangent cut along $C$ direction.

Tangent is the ratio between the opposite and the adjacent side of a right triangle. If a circle is drawn around the triangle with the diameter of the hypotenuse of the triangle, a line perpendicular to the hypotenuse at the point where it intersects the circle is tangent to the circle, i.e. it passes through one and only one point on the circle. 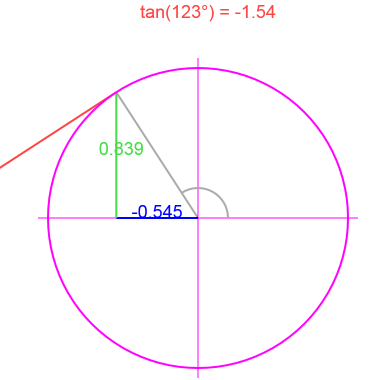 It might help to look at the definition of a 'secant' line first. A secant line is basically just a line which passes through the graph of a function at two points. To find the tangent line at a specific point (x,y), we look at all of the secant lines containing (x,y). In other words, fix that point and let the second point vary along the curve.

Now, the tangent line is just the limiting line as the second point gets very close to our fixed point (x,y). In most functions, this behaves as others are saying - that is, that the function (close to where we're looking) is all on one side of the tangent line and only our point (x,y) touches the line. There are, however, cases like $x^3$ at (0,0) where the function may split to both sides.

The tangent line at point P is best defined as a limit position of a secant line that crosses the curve at points P and Q, as the point Q approaches P along the curve.

No coordinate system, no coordinates, no calculus (well, almost).
And it works in 3D and higher dimensions as well. :)

In other words, $l$ is tangent to $f$ if it cuts $f$ in only one point and the curve is on the upper side or the underside of the line.

There is no need to define the tangent in terms of calculus, rather, this definition is the basis for many concepts in calculus, attempting to use calculus to define it would be circular reasoning. Rather, your issue is with an incorrect stating of the definition which could never be reconciled to what a tangent actually is. Note also, this does not mean that the tangent cannot cross the curve, it can, and often does for complex curves. It simply cannot cross the curve at the tangent point.

The tangent line is the unique line that "touches" the point without actually actually crossing it. For the other lines in your example, there's a crossover at the point; the line goes from being above the curve to below it. The tangent line remains beneath it.

This is obviously not the rigorous definition, but for someone just starting out with calculus this is probably the easiest way to conceptualise it.

Not the answer you're looking for? Browse other questions tagged calculus definition infinitesimals tangent-line or ask your own question.