How to know whether an Ordinary Differential Equation is Chaotic?

Assuming we have an ordinary differential equation (ODE) such as Lorenz system:

This system is known to be chaotic because of its behavior [1], [2].

Or if there is no way for 100% judging, at least is there any way to guess it? 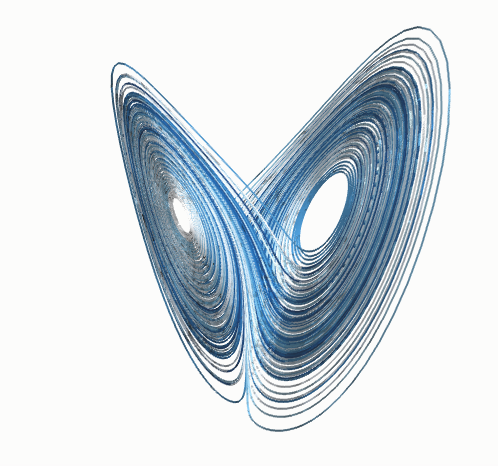 No general tools are known.

For the Lorenz equations, Warwick Tucker has proved the existence of a chaotic strange attractor.

It is a non-trivial proof that combines normal form theory and validated computations using interval arithmetic.

An introduction to the Lorenz system can be found in [1,2].

If there is no general tool to prove that a continuous dynamical system is chaotic, there are at least several tools to prove that a system is not chaotic (see e.g. [3]). Here is a short non-exhaustive list of features which allow a first-order autonomous ODE system $$ \dot{X} = F(X) \, \qquad\text{where}\qquad X\in\mathbb{R}^n \;\text{and}\; F \in C^1 $$ to be chaotic:

There are several case-dependent methods for the analysis of chaos. In the case of periodically forced Hamiltonian systems, a dedicated tool is Melnikov's method.

To answer the question at hand: Provided that we decide to agree on a particular definition of chaotic system, it might be possible to determine the chaotic nature of a system from its equations (not sure if there is a general method).

My definition of chaotic system: Given a system of (ordinary) differential equations $\Delta$, we say the system is chaotic if there exists initial data, $d_0$, such that we can find a point $p_0$ along solution curve for the given initial data, which arrises from the independent variables taking on the value $x$ ($x$ is a point in the space defined by the independent variables of $\Delta$) and an $\epsilon >0$, for which there is no $\delta >0$ satisfying the following:

The point of the above definition is that infinitesimal changes in intial data yield arbitrary changes in what the solution curve looks like (you can see intuitively how your given system fails to have a $\delta$ by observing what happens if you take an $\epsilon$-ball of a point on one of the 'wings' and have the initial data be from where the 'wings' meet).

4
What defines a chaotic system?
3
For what $r$ does the Lorenz attractor exist?
2
How to show that a finite dimensional linear system of ODEs cannot be chaotic?
-2
Bifurcation Analysis of the Three Dimensional System of ODEs

1
Chattering effect using ode23s -- discontinuous state-space matrix
0
NDSolve solves this ordinary differential equation only "half-way"
1
Poincaré-Bendixson theorem in $\mathbb{R}^1$
1
How can the behavior of a chaotic dynamical system be anticipated by another system? And why is feedback delay within the latter necessary for this?