Wait before you dismiss this as a crank question :)

A friend of mine teaches school kids, and the book she uses states something to the following effect:

If you divide the circumference of any circle by its diameter, you get the same number, and this number is an irrational number which starts off as $3.14159... .$

One of the smarter kids in class now has the following doubt:

My friend is in a fix as to how to answer this in a sensible manner. Could you help us with this?

The trouble with this is that I don't know of any easy way of doing this, which would also be accessible to a school student.

Could you point me to some approximation argument of this form?

If the kids are not too old you could visually try the following which is very straight forward. Build a few models of a circle of paperboard and then take a wire and put it straigt around it. Mark the point of the line where it is meets itself again and then measure the length of it. You will get something like 3.14..

Now let them measure themselves the diameter and circumference of different circles and let them plot them into a graph. Tadaa they will see the that its proportional and this is something they (hopefully) already know.

Or use the approximation using the archimedes algorithm. Still its not really great as they will have to handle big numbers and the result is rather disappointing as it doesn't reveal the irrationality of pi and just gives them a more accurate number of $\pi$.

You can try doing what Archimedes did: using polygons inside and outside the circle.

Here is a webpage which seems to have a good explanation.

An other method one can try is to use the fact that the area of the circle is $\displaystyle \pi r^2$. Take a square, inscribe a circle. Now randomly select points in the square (perhaps by having many students throw pebbles etc at the figure or using rain or a computer etc). Compute the ratio of the points which are within the circle to the total. This ratio should be approximately the ratio of the areas $ = \displaystyle \frac{\pi}{4}$. Of course, this is susceptible to experimental errors :-)

Not sure how convincing the physical experiments might be, though.

Given the age of the children, I think that wheeling a bicycle along the ground and measuring the distance traveled for one wheel revolution would be a good idea. This exercise can be continued by asking for suggestions on how to improve the accuracy (e.g. wheel the bike two revolutions etc)

As you obviously have children in the class who pose thoughtful questions, one can ask what do you think would happen to the distance measured on the cycle milometer if pi was suddenly smaller or larger (if one let down or pumped up the tyres). What would happen to the speed registered in such cases. I'm sure there is an interesting exercise for your pupils here. Good luck.

I got this idea from a colleague in grad school. It's one of my favorite lessons.

Since my original posting of this answer, I've created an animation that appears on my trigonography site. The animation itself is too big to post here, but a frame of it appears below. 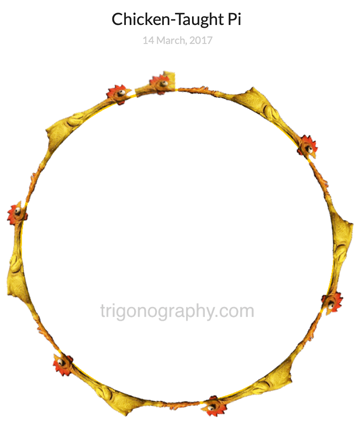 This doesn't explain anything about the irrationality of $\pi$ or that kind of thing, but it's a lesson the kids will never forget. :)

Update : When Pi is Not 3.14 | Infinite Series | PBS Digital Studios can be used for teaching.

Answer is that with the usual Euclidean metric that is the number that one gets, the value of $\pi$ is dependent on the geometry that is being used, so on a sphere the $\pi$ used to obtain the area will be different.

I wrote a blog article about this a few years ago in response to a friend who asked why $\pi$ came out to be approximately 3, rather than some completely different number. I didn't know, but tried to make a list of potentially relevant lines of investigation. I came up with 8 items, some obviously more pertinent than others. In approximately descending order of quality, they were:

People have since written to me pointing out that $\pi$ appears in certain statements of physical law, but these all seem clearly and simply related to its appearance as a circle and sphere constant. For example in Coulomb's law: the electric field E at distance $r$ from a charge $q$ is $$\frac1{4\pi\epsilon_0}\frac{q}{r^2}.$$ But the appearance of $4\pi$ in the denominator here is solely because it is the surface area of a unit sphere, and so we divide by it to get the electric flux per unit area.

I had a bit more to say in the original article. I hope this is some help.

First off, notice that the kernel of your question is obscured by focusing on the decimal digits of an irrational (indeed, transcendental) number. We could ask the same kind of question about a plain vanilla positive integer. For example, why is it that 1729 ("Hardy's taxicab number") is the smallest positive integer representable as the sum of two cubes in two different ways? Why isn't it some other number instead? Why is it this specific number? However, this new perspective puts us on the road to the answer to your question. Consider this question: Why is it that, for convex polyhedra, the number of vertices minus the number of edges plus the number of faces always equals 2? However, by stereographic projection, this is equivalent to asking why it is that, for connected planar graphs, the number of vertices minus the number of edges plus the number of regions (counting the "infinite" region as one of the regions) always equals 2. However, the proof for the case of connected planar graphs typically involves dismantling the graph in a canonical manner that reduces to a triangle, for which the value of 2 is "obvious". This brings us to the answer to your question: it is not a matter of mathematics, or even of metamathematics, but a question of psychology. The more steeped you are in Mathematics, the more obvious things seem to you. For example, for Euler, who had, among other things, committed many primes to memory, the value of Hardy's taxicab number would perhaps seem self-evident, as it did to Ramanujan. To an Infinite Intelligence (God), everything would be self-evident, but for finite minds there always comes a boundary where they wonder why a certain value is what it is. Nor is Mathematics unique in that regard. In Physics they still haven't figured out why the so-called "fine structure constant" is the value that it is (approximately 1/137), and the reasons for its value is the subject of on-going debate.

Anyway, perspective might be gained and retained by bearing in mind the following famous joke:

I think it is a very nice way to explain what is a definition in math. You have got a number with the same value for every one. As long you can make the kids believe the ratio circumference/diameter does not depends on the size of the circle nor of the kid measuring it nor the paper nor of the the weather nor...

Then you leave the choice: do you want to make your computation with the symbol $\pi$ or with the value $3.14159...$ which you will have to remember. Personally, I'd rather learn a new symbol and leave it like that in the formulas rather than go the hard way of multiply with a 5 decimal digit (well and $\infty$ decimal digit in some sense).

Afterword you can think of a way to compute it. You'll go into explaining how clever where the many mathematicians that did try to design they own way to compute $\pi$.

But what really matters is: what ever the way you try, you will find the same number. And in facts, the number of things you can do without knowing the exact value is incredible.

How does know the exact value of $\pi$ by the way ?

One can answer the second question "pi can equal some other irrational number" and it will have little bearing on any sort of application of mathematics. There exist an uncountable infinity of numbers close to pi by the absolute value metric. So, any engineer, physicist, or applied mathematician seeking a certain precision could use a value within that level of precision instead of pi.

So, I don't think the approximations you've gotten here answer your first question.

Not the answer you're looking for? Browse other questions tagged geometry circles education pi or ask your own question.

0
Is there any geometry where ratio of circle's circumference to its diameter is rational?
22
Why is it so difficult to determine whether or not $\Large \pi^{\pi^{\pi^\pi}}$ is an integer?
1
Plotting an arc with no center point - a practical solution please!
5
Why was I taught to convert "improper fractions" into mixed numbers?
1
Simple proof that the first digit of pi is 3
-1
Why problem with simple formulation is so hard?
3
Circle from $n$-gon circumference${}=1$