I'm reading a Math lecture note on mathematical induction, and in it, the author condemns a way of concluding that $\ P(n) \implies P(n+1)\ $, which is done by assuming $\ P(n+1)$, making a few deductions, and arriving at a $ \mathtt{True}\ $ statement. I'll give a very elementary example of proving an identity involving the sum of natural numbers.

The author of the lecture note objects to [Bad?] because we're assuming what we wanted to prove, which is circular. However, I've seen a lot of induction proofs which are in the form of [Bad?], even in famous Math books. One example is an induction argument used to prove a very elementary fact about natural numbers, which I'll paraphrase from Terry Tao's Analysis I book:

In fact, inductive proofs in the form above are used many times in Terry Tao's book. Is there anything wrong with such proofs?

Edit: In case I wasn't clear, here's a snippet of the lecture note. 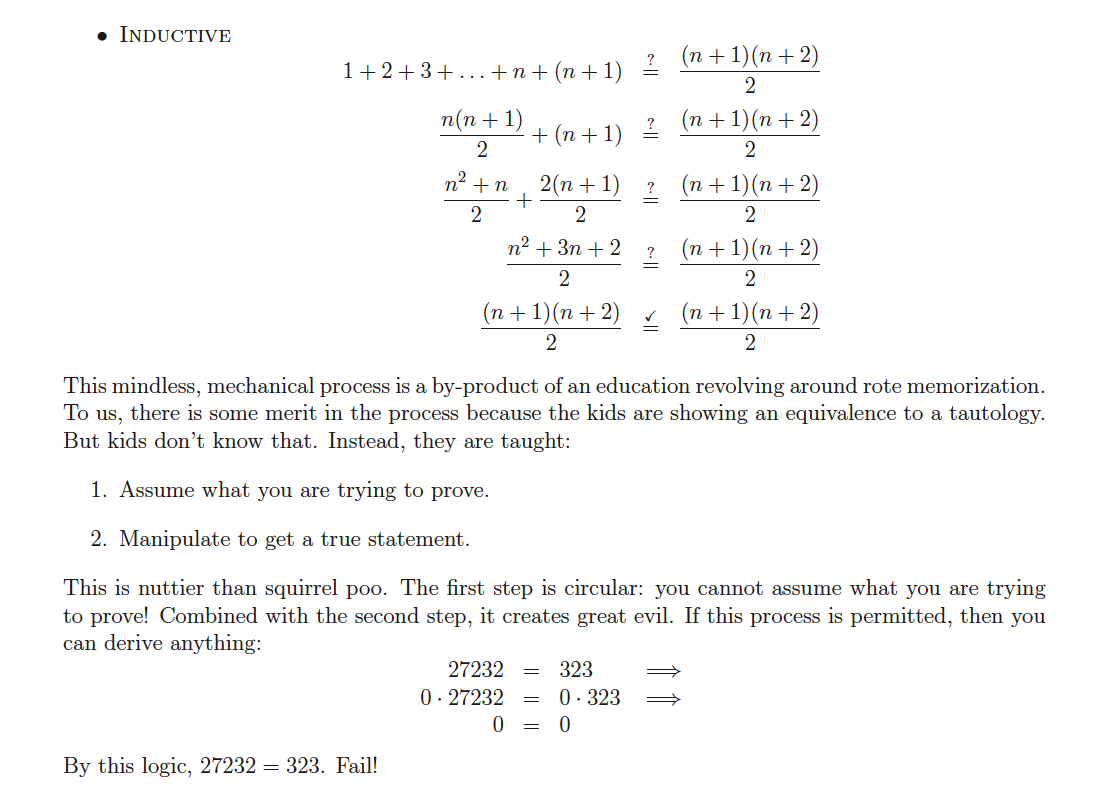 We are not assuming what we want to prove. The key point is that the "bad" author uses equivalence transforms to arrive at a true (based on the induction hypothesis) statement. It is just unfortunate that the fact that the transforms are equivalence transforms ("$\iff$ instead of - insufficiently and wrongly - just "$\implies$") is hidden from the reader in the word "re-written". So, while not wrong per se, the "bad" proof at least suffers from the potential to stylistic improvement in this respect.

Apart from this, the author has a point: Whenever you apply transforms to arrive at a true statement from the statement you want to prove, there is always the risk that somewhere deep inside you accidentally have a step that is only $\implies$ and not $\iff$ ... So while this direction may be very well suitable for discovering a proof on scratch paper, I'd still recommend to rewrite everything into the "good" order for a published proof.

As I understand it, an invalid 'proof' involves an inferential strategy like:

which fails to establish the truth of $P(n+1)$.

both of which succesfully establish the truth of $P(n+1)$. But this has nothing to do with proof by induction per se; its just basic logic.

Not the answer you're looking for? Browse other questions tagged elementary-number-theory induction or ask your own question.

1
Is my proof of the principle of backward induction using well-ordering correct?
2
If $ 0 \le b \le a$, Prove $a \pmod b \lt \frac{a}{2}$
1
Inductive proof of symmetric identity of binomial coefficients
1
Why induction works when the starting point $0$ and the theorem valid for non-zero natural numbers in Peano's arithmetics
1
Proof with mathematical induction: $F_{m+n+1}=F_{m+1}F_{n+1}+F_{m}F_{n} \quad \text{for} \ m,n \geqslant 0$
1
How is the inductive hypothesis in strong mathematical induction different from that in ordinary induction?