$AA', BB'$ and $CC'$ heights of an acute triangle $ABC$. The circle with center $B$ and radius $BB'$ intersects the line $A'C'$ in the points $K$ and $L$. Prove that the intersection point of lines $AK$ and $CL$ lies on the line $BO$, where $O -$ center of the circle circumscribed about the triangle $ABC$.

My wotk so far: 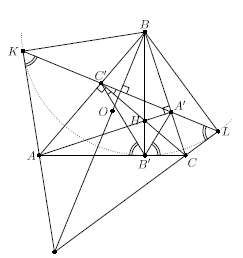 Too bad this problem did not get more attention. A lot of things going on here... 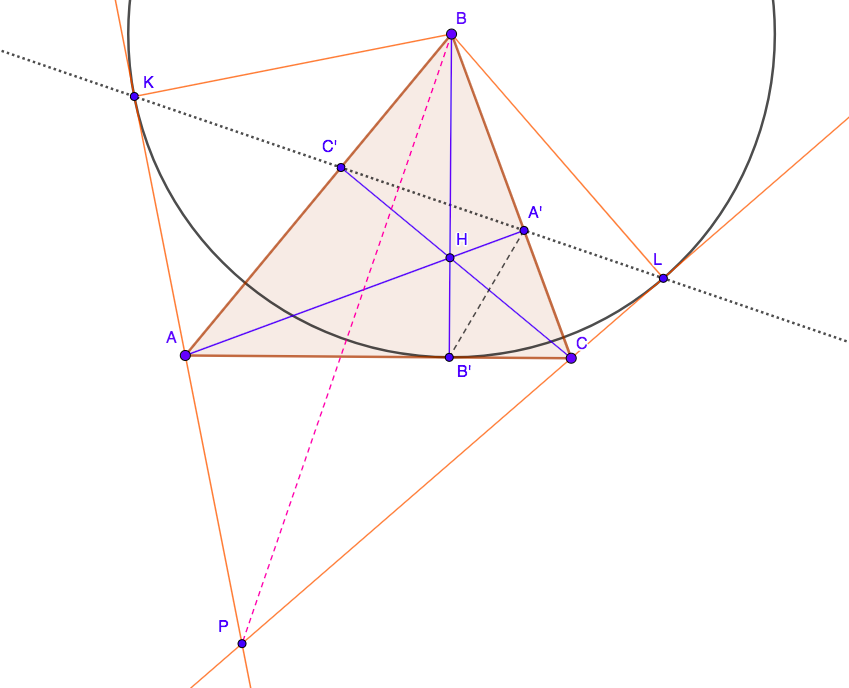 Also note that in $\triangle A'CL$:

You can show in exactly the same way that:

So triangles $\triangle BKL$ and $\triangle KLP$ are isosceles and quadrilateral $BKPL$ is symmetric with respect to $BP$.

So we proved that:

It's a well known (and easily provable) fact that bisector of $\angle B$ splits not only the angle itslef but also the angle between the height $BB'$ and the line that contains point $B$ and the center of circumscribed circle $O$ (for more details you can check this page or Wikipedia; if you still want the proof of this fact, please let me know). In other words, lines $BB'$ and $BO$ are symmetric with respect to bisector of $\angle B$.

In this particular case, $\angle ABP=\angle B'BC$ which means that lines $BB'$ and $BP$ are actually symmetric with respect to the bisector of $\angle B$ (not shown in the picture). This means that the line $BP$ must contain the center of circumscribed circle $O$. Done!

EDIT: Mick mentioned that I was using ASS to prove that triangles $\triangle BA'B'$ and $\triangle BA'L$ were congruent. I think that I had the right to do because in acute triangles the angle at $A'$ is always obtuse. Quote from Wikipedia: If two triangles satisfy the SSA condition and the length of the side opposite the angle is greater than or equal to the length of the adjacent side (SSA, or long side-short side-angle), then the two triangles are congruent. But, OK, I admit that ASS is ugly so let's prove the same without it. Maybe not the easiest proof but it still works: 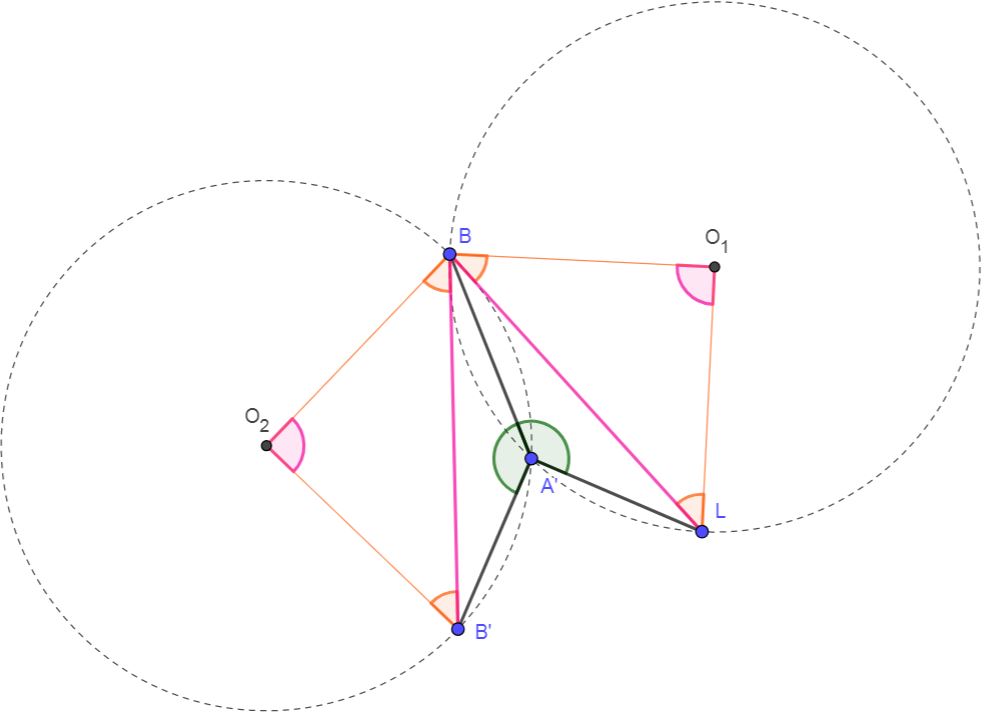 It's now obvious that triangles $\triangle BO_1L$ and $\triangle BO_2B'$ have the same angles. Having in mind that $BB'=BL$ and by applying ASA:

In other words, both circles have the same radius and, consequentially:

Not the answer you're looking for? Browse other questions tagged geometry euclidean-geometry triangles or ask your own question.

1
An elementary problem in Euclidean geometry
0
Prove that in acute-angled triangle middle point of a sector lies at a certain line
2
The line through certain points on extensions of two sides of a triangle is perpendicular to the line through the incenter and circumcenter
3
Proof that 4 points lie on a circle and that center of this circle lies on the circumcircle of $\triangle ABC$
8
Problem of three circles
3
USATST 2013/2 Prove that the intersection of $XL$ and $KY$ lies on $BC$.
0
Show that a point inside an acute triangle is the orthocenter
2
Line segments intersecting at the nine-point center
1
Given a scalene triangle and its orthocenter, prove that a point on its Euler circle, has a constant line segment