Inscribing a rhombus within a convex quadrilateral

I was wondering if it is possible to inscribe a rhombus within any arbitrary convex quadrilateral using only compass and ruler? If possible, could you describe the method?

If not could you give an example of a convex quadrilateral which one can not inscribe a rhombus within?

EDIT, Saturday July 21: I was wondering if an inscribed rhombus might be required to have edges parallel to the diagonals of the original convex quadrilateral. But this is not always the case. Take a square, on each edge mark a point the same distance counterclockwise from the nearest vertex. This makes an inscribed square, and is one of the oldest proofs-without-words of the Pythagorean Theorem.

ORIGINAL: Given a convex quadrilateral ABCD, the main observation is that the new quadrilateral made up with vertices at the midpoints of the four sides is automatically a parallelogram. So we just need to adjust the relative lengths of the sides, we will make an inscribed rhombus with sides parallel to the midpoint-parallelogram. That is, we make a parallelogram RSTU such that its sides RS and RU have the same length, thus forcing it to be a rhombus. To emphasize, the sides of the rhombus RSTU are parallel to the diagonals AC and BD of the original quadrilateral. I think I will skip the proof that it is inscribed, bunch of similar triangles involved. Many.

Take a quadrilateral such that AB and CD intersect in a point P. 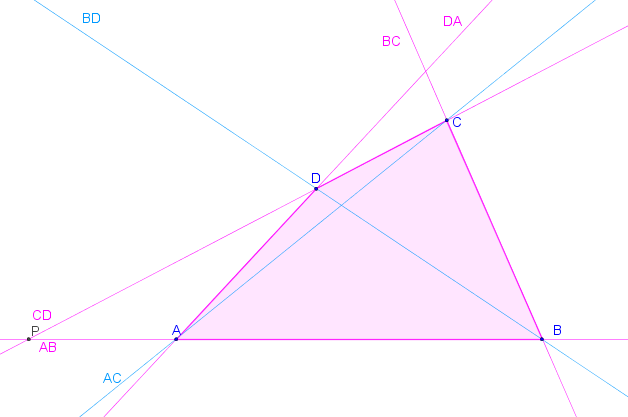 Through D, draw a line $L$ parallel to the diagonal AC. 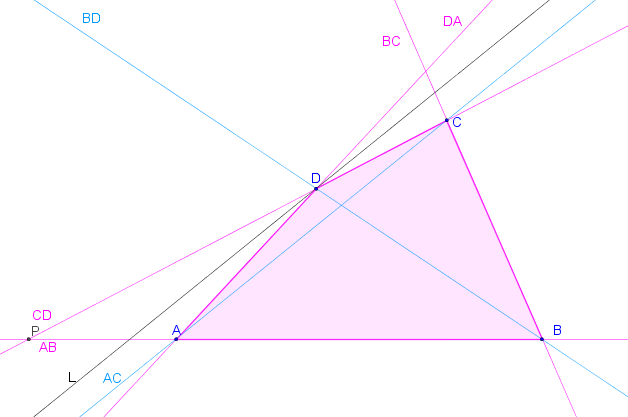 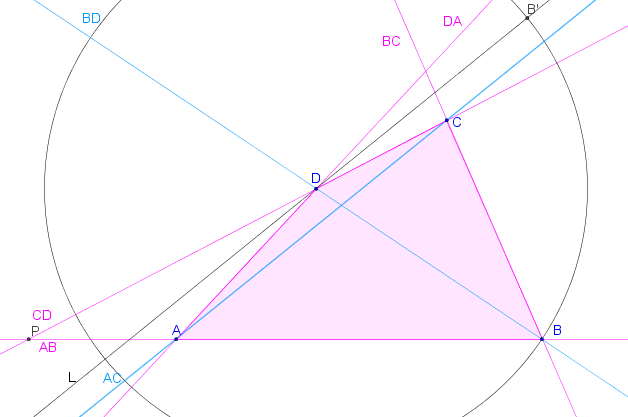 Draw the segment BB' and let it intersect line CD at B''. 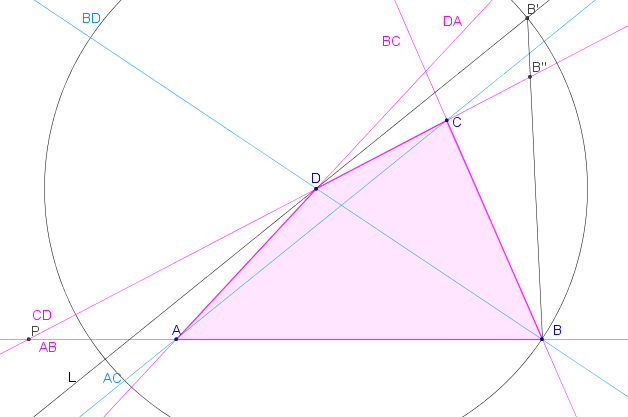 Draw a line $M$ through B'' that is parallel to AC and $L,$ and let $M$ intersect the other diagonal BD at point Q. 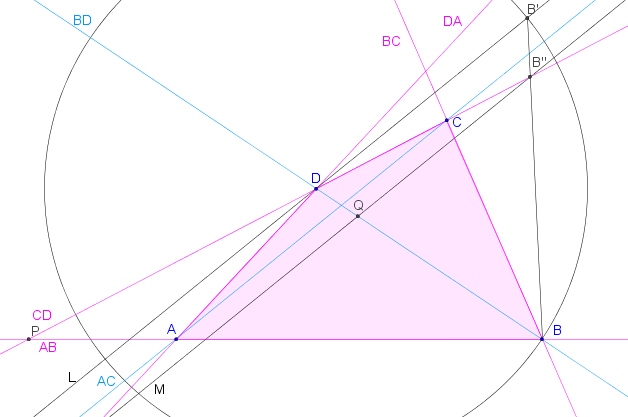 Draw the line through PQ and let it intersect edge AD at R. R is the first vertex of our rhombus. 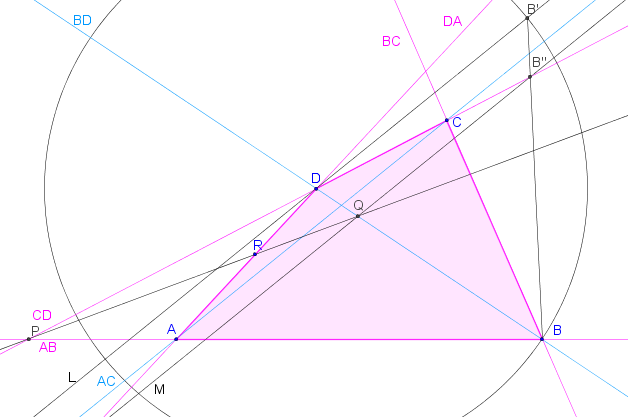 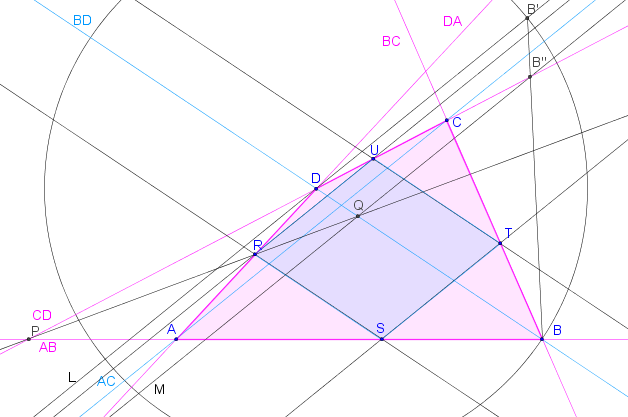 I see, there is a way to fiddle with this if we consider AB and CD parallel instead. Not to worry.

Anyway, give it a try. You may need to adjust the figure so that everything comes out on one page, lines that are supposed to intersect really do, and so on. I did what I describe with compass, straightedge, T-square (actually an L-square), and a nice parallel ruler

I bought a home scanner. These are my drawings, the first one actually shows the proof of something. In the first two, the line PQ intersects the original quadrilateral on the side away from P, that it how I thought of it. I also deliberately made line PQR dotted so as not to interfere with other parts of the drawing. Later I made a third drawing with pencil construction lines so that I could erase those; that one did after the approximate proportions of HonestAbe's pictures, plus I used an ink nib for the compass to make the circle visible. 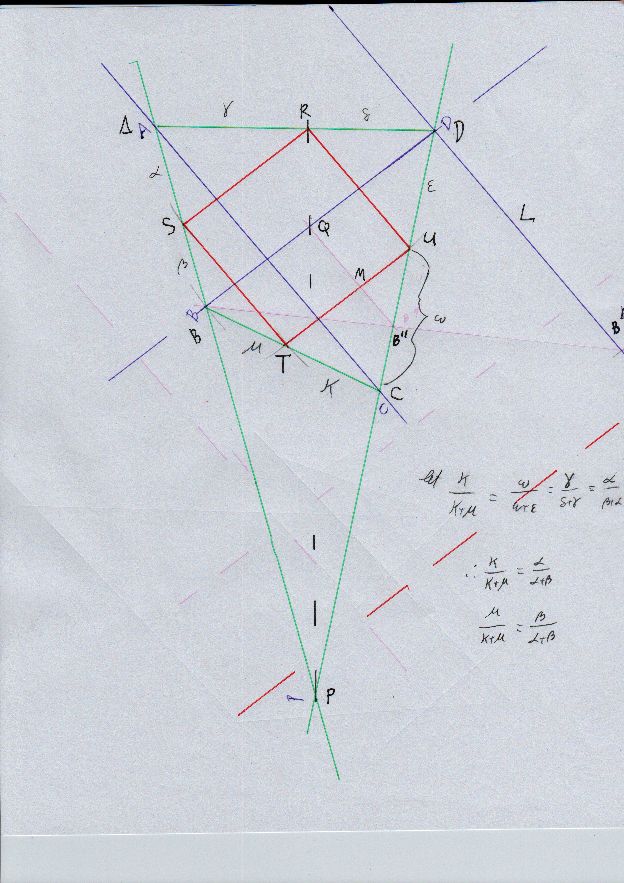 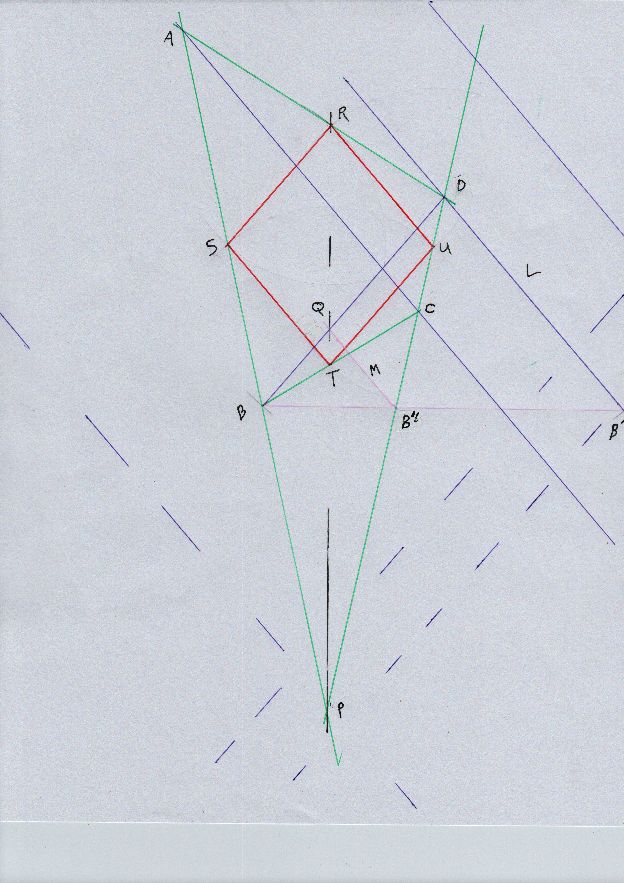 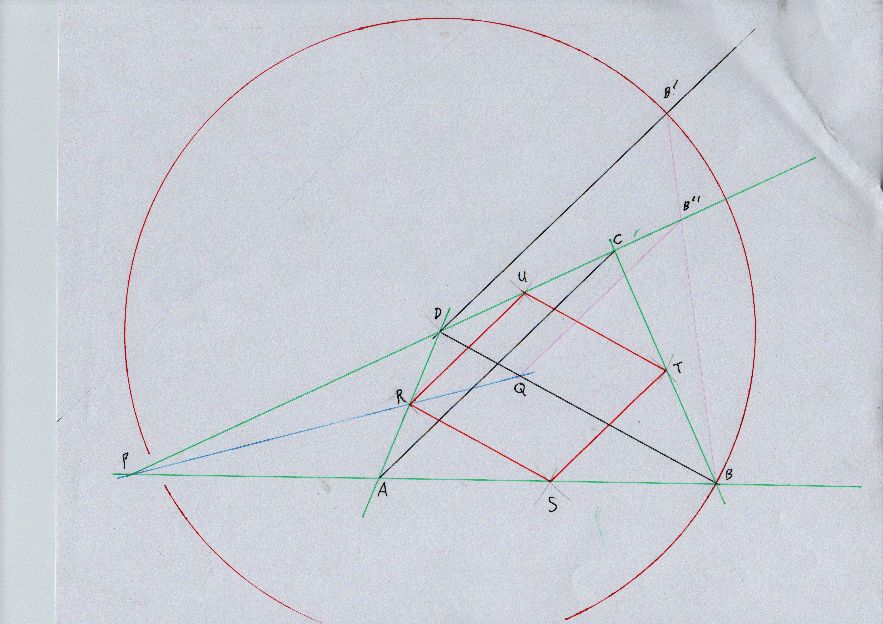 The following is a proof of constructibility, with some standard details missing, mostly the fact that the arithmetical operations and square root can be carried out by straightedge and compass.

In principle, one can use the proof to give instructions on how to carry out the construction. However, the construction one gets has little real geometric content. There is undoubtedly an elegant geometric construction. But the algebraic approach used below has the nice feature of being essentially automatic. If one has a certain amount of background, a glance at the problem shows that an inscribed rhombus is constructible.

Proof: They are both parallel to $BD$.

Corollary: If $AP:BP=AS:DS$ and $BP:BQ=DR:CR$ then $PQRS$ is a parallelogram.

In particular (not relevant here, but cute) if $P$, $Q$, $R$ and $S$ are bisectors of the sides they lie on, then one gets the unexpected result that $PQRS$ is a parallelogram.

Now we leave classical geometry. Choose a coordinate system with $A$ at the origin, and with $B$ say at $(1,0)$. (It doesn't matter.) Points $C$ and $D$ then have "known" coordinates, and all the lines of our quadrilateral have known linear equations, with coefficients constructible from our given points.

The ordinary arithmetical operations can be done by straightedge and compass, as can square root. So the geometrically relevant solution of Equation $(1)$ is constructible from our given points. Now that we have $P$, the rest of the construction is done by drawing parallels.

9
What is a simple (or not) way of finding the lengths of the diagonals of this rhombus?
10
How to construct three mutually orthogonal circles in stereographic projection?
5
Resource for learning straightedge and compass constructions
2
Compass and ruler construction
2
How to inscribe a square in an arbitrary quadrilateral using compass and straight edge
1
What is the name of this (circumscribed) triangle?
1
An angular inequality