What triangles can be cut into three triangles with equal radii of the circumscribed circles around these triangles?

What triangles can be cut into three triangles with equal radii of the circumscribed circles around these triangles?

My work so far:

Case 1) let $ABC -$ an acute-angled triangle. Then radii of the triangles $ABH, BCH$ and $ACH$ are equal, where $H -$ orthocenter.

This is just a rough sketch without formal proof. 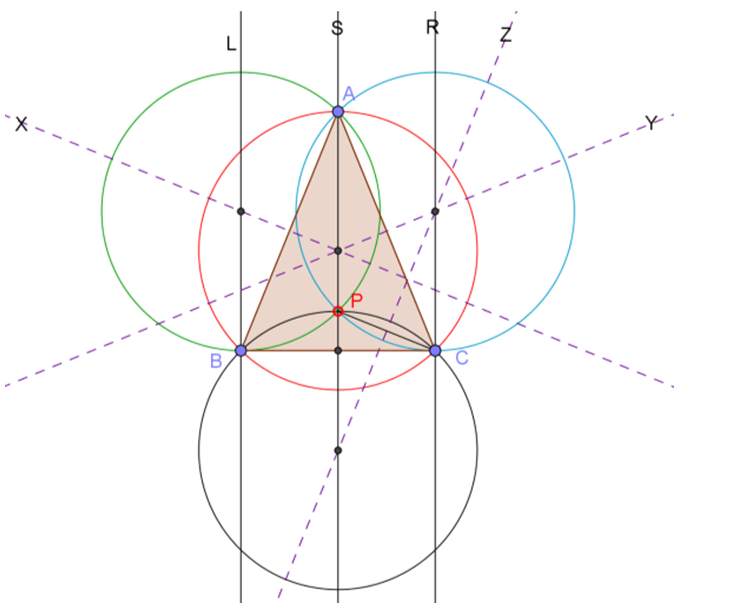 S is the axis of symmetry of $\triangle ABC$.

L (through B) and R (through C) are the perpendiculars to the base BC.

X and Y are the perpendicular bisectors of the legs.

The intersection of X and L forms the center of green circle passing A and B (and also P, see later). The blue circle is formed similarly. The two circles will intersect at P.

Z is the perpendicular bisector of PC. The intersection of Z and S forms the center of the black circle passing through B, C, and P.

These circles (including ABC) happen to be having the same circum-radius.

The picture is drawn with $\angle BAC$ acute. However, if we let A slide along S until it hits P, then $\angle BAC$ becomes obtuse. The same conclusion still true.

The following is an additional info from my finding:- 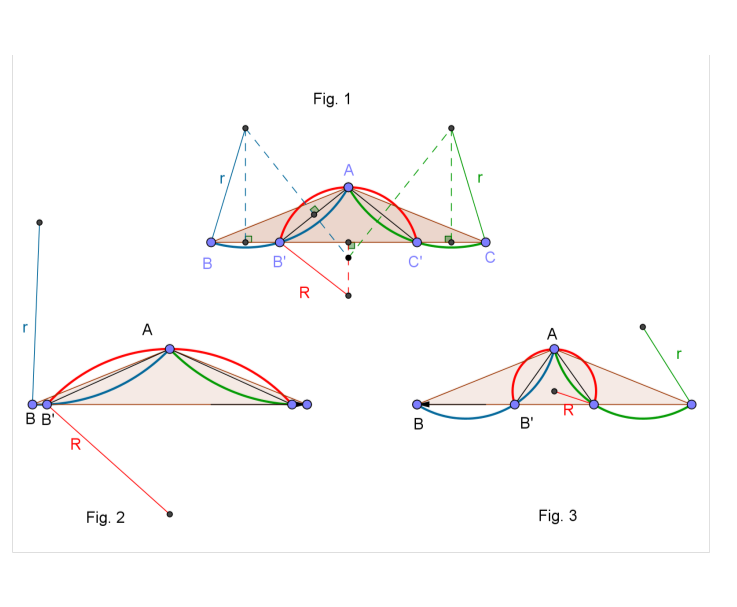 The actual constructions of the perpendicular bisectors are clearly shown in Fig. 1.

By symmetry, in order to have $R = r$, $B‚Äô$ must be coincide with $B$. In other words, if $\angle BAC$ is obtuse, there is no way that we can find two points on $BC$ such that the three triangles thus formed can have the same circum-radius.

Not the answer you're looking for? Browse other questions tagged geometry euclidean-geometry circles triangles or ask your own question.

0
Radii of the circles circumscribing the triangles $BHC,CHA,AHB,ABC$ are all equal
8
Extended $3$square problem
0
Proof that the circumcenters of sub triangles forms a triangle congruent with the original triangle
5
EGMO Problem 3.20 (BAMO 2013/3)
3
Triangle centers Orthocenter
1
Show that if the centres of the circumscribed circles of the triangles $DEF$ and $ABC$ coincide, then $ABC$ is an equilateral triangle.
1
The perimeter of an isosceles triangle $\triangle ABC$
0
$H$ is orthocenter of acute triangle $ABC$. Prove that triangle with circumcenters of $ABH, BCH,$ $CAH$ as vertices is congruent to $ABC$
5
(BAMO $2013/3$) $ABH$, $BCH$ and $CAH$ is congruent to $ABC$.
0
Show that a point inside an acute triangle is the orthocenter