I am giving a lecture on Braid Groups this month at a seminar and I am confused about how to understand the fundamental group of the configuration space of $n$ points, so I will define some terminology which I will be referring to and then ask a few questions.

EDIT: I have been able to answer some of my own questions recently by further thinking and research but I have one remaining question.

We place a base point $\vec{p} = (p_{1},...,p_{n})$ in our configuration space $C_{o,\hat{n}}$ and then we want to consider loops in configuration space. I can visualize how if we place our base point as a configuration of collinear points that we obtain a braid on $n$ strands, but I am not sure why there is a non-trivial loop. My understanding of homotopy is that if there is no "hole" in the space, then we can continuously retract our loop in $C_{o,\hat{n}}$ back to our base point $\vec{p}$. Why can we not do this in this case?

Sorry, but my first answer was completely and utterly wrong. Since this question is one of the top search results for the query "braid group fundamental group configuration space" I think it's high time I've updated with a correct explanation! :-)

I am not sure why there is a non-trivial loop. My understanding of homotopy is that if there is no "hole" in the space, then we can continuously retract our loop back to our base point. Why can we not do this in this case?

However $(x_1,x_2,x_3,\cdots,x_n)$ will not be path-connected to $(x_2,x_1,x_3,\cdots,x_n)$ within $F_n(X)$. The difference between the first two coordinates would need to change from positive to negative, and hence by IVT must be zero at some point. In general, a path in $F_n(X)$ cannot change the "rank order" of the coordinates of a tuple. So there are no paths between points in any $S_n$-orbit in $F_n(X)$. Therefore, any based loop in $SF_n(X)$ when lifted back to $F_n(X)$ must also be a loop, hence must be nullhomotopic since $F_n(X)$'s connected components are simply connected, so $SF_n(X)$ is simply connected, so the braid group $B_n(\Bbb R)=\pi_1(SF_n(\Bbb R))$ is trivial.

The vertical maps are isomorphisms since they are induced from deformation retracts. As a result, we know that the inclusion of the pure braid group $P_2\hookrightarrow B_2$ is akin to $2\Bbb Z\hookrightarrow\Bbb Z$.

I don't think this kind of argument will generalize though.

Thus, imagine a continuum (indexed by $[0,1]$) of copies of $\Bbb C$ (resting flat) piled on top of each other. If one lets the altitude represent time, then the paths traced out between the points represent strings, and if one looks at this picture from the side one sees braid diagrams! Example: 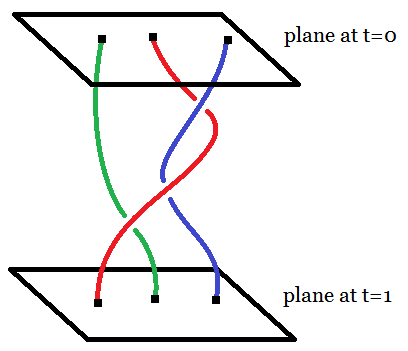 Since we can choose our basepoint for $\pi_1$ to be anything, without loss of generality we may assume it is $\{1,2,\cdots,n\}\subset\Bbb C$ for the purpose of visualization. Tuples in $\Bbb C^n$ with nondistinct coordinates represent two strings intersecting at the same point, which is why wemust delete this subspace from $\Bbb C^n$: to prevent collisions.

A path in $\Bbb C^n$ ending where it started means each colored string above would have to go back to its original point, and this defines a pure braid. If we quotient by the action of $S_n$, we essentially allow the path in configuration space to go to any of the permuted configurations, which means the strings in the braid diagram can connect different dots.

There is another way to visualize braids that is also very interesting: mapping classes of the closed unit disk with $n$ points inside deleted. I recently asked a question about generalizing this idea to generalized braid groups. Mappings can warp the unit disk like a sheet of rubber, but the rubber is attached to the boundary (the unit circle) which must remain fixed pointwise. When you delete $n$ points, that essentially means your mappings of the disk must restrict to a permutation of those $n$ points.

To visualize what such mappings look like, for $B_2$ imagine putting two fingers on the two points in the disk, then using your two fingers to warp the rubber disk by turning it one way or the other with your fingers. Remember the border of the rubber sheet is stuck in place, so you'll be twisting the inside of the rubber relative to the outside rather than lamely rotating it. In general for $n$ points, you can do the same thing by twisting the rubber around two points with two fingers.

There two ways to twist two marked points around each other with your fingers (clockwise or counterclockwise), corresponding to which string goes over/under which in the braid diagram. The paths that the marked points take throughout the twisting process essentially trace out a braid diagram. Intuitively, we should be able to "lift" any braid diagram into a composition of such twistings of the unit disk. More detail is given in the link.

Not the answer you're looking for? Browse other questions tagged general-topology algebraic-topology knot-theory or ask your own question.