I am having problems visualizing the "mechanics" of the Lebesgue integral, but after much editing of the question I think I get it (at least for nice functions where measure theory can be somewhat taken for granted).

So I decided to posted the material I have been working on as a proposed answer.

Part of the misunderstanding had to do with plots found online showing slabs of horizontal, brick-like constructs, as opposed simple functions. In addition, the initial definitions on the chapter on Lebesgue integrals in A Garden of Integrals by Frank E. Burk:

Comparing the supremum of the lower sums with the infimum of the upper sum over all possible partitions of $[\alpha,\beta]$, we see if these two numbers are equal, say $A$, we say $f$ is Lebesgue integrable on $[a,b]$, and we write $A=L\displaystyle\int_a^bf\,d\mu$.

This cine clip may encapsulate the concept of generating the Lebesgue integral of a continuous bounded function:

Perhaps unfortunately some of the static iconography on-line may hint at a false impression of a pyramid being built with horizontal slabs and from inside out, as in this slide from Coursera, with brick-like horizontal slabs, as opposed to simple functions: 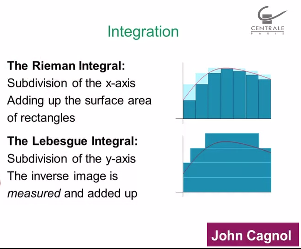 In Lebesgue integration, there is no "lower sum" and "upper sum" converging, as in the Darboux integral. Likewise there is no overlap between any of the infinity of possible simple functions because of their "step" nature. The Lebesgue integral is defined on a measurable function $f: M\rightarrow \mathbb R$:

where $s$ corresponds to a simple function:

The range or codomain of the function is partitioned fixing a maximum value $n$ into $k=0$ to $k = 2^n n$ intervals at heights $\frac{k}{2^n}$ in order to defined a sequence of simple functions $f_n:$ 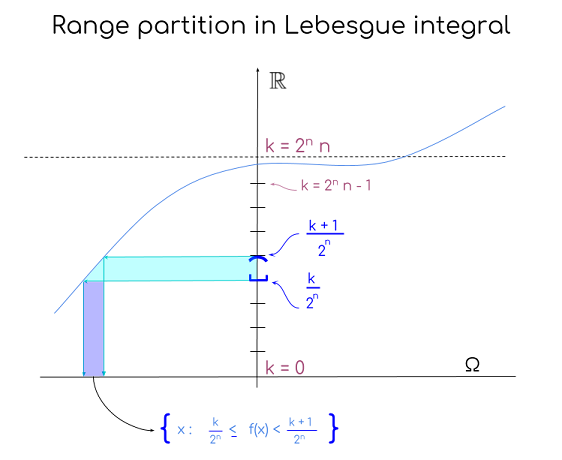 Coding a concept helps, so I tried doing so for this post, illustrating the Lebesgue integral of $y = x^2$ between $[0,1]$. The code is here, and the output looks like this:

Finally, here is a systematic "construction" of the Lebesgue integral for an inverted parabola, really showing how the critical step is to partition the range (y axis) in $N$ equally spaced divisions between the $y$ limits of integration, defining $[y_i,y_{i+1}]$ intervals, and look for the measure of the pre-image in the $x$ axis: the difference between the inverse function at a given chosen point, $y^*$ (not a slab) for any given $[y_i, y_{i+1}]$ interval, $f^{-1}(y^*_i)$, and the inverse of the next point in the y axis, $y^*_{i+1}$. Analytically, this "strategy" relies ultimately in letting $N\rightarrow\infty$, which explains the "pyramid" iconography so often found online, which is intuitive, but has the potential to suggest the integral as a pile of horizontal slabs. This was a big hurdle understanding the difference between the Lebesgue and the Darboux integrals. Here is an attempt at a more faithful dynamic representation (again the code is here waiting for improvements):

You're confusing the things of which the supremum and infimum are taken.

In your drawing, each box is just a term in the sums.

What you should be taken the sup and inf of is this: consider all the partitions of the interval. Calculate all the upper sums with those partitions and put them in a set. Then calculate the infimum of that set.

Do the same with the lower sums.

If those numbers are equal, then the integral exists.

Not the answer you're looking for? Browse other questions tagged lebesgue-integral or ask your own question.