Approximate solution for the root of a non-linear function

where $t$ is the independent variable and the parameters $g$, $\omega$ and $b$ are real and positive and $c$ is real.

This, apparently has no analytical solution and I have been doing it in the computer easily. However, for some parts of my research it would be very useful to have some approx. solution. For instance, in the form of a series where successive approx. may be computed. However, I have no idea how to even start. Would anyone Have some guidelines as to how to approach this problem?

Thanks very much in advance.

ie, the value of $t_1$ that satisfies this equation and is closer to $t_0$. Note that the RHS is simply the number which I previously called $c$. With $t_1$, the next step is to compute $t_2$ from the equation

This is the framework of my current problem: find successive roots $t_i$ with the sign in $b$ alternating between each computation.

Thank you all for the support. As for the instability (cf. @LeonidKovalev's answer), here is an example: 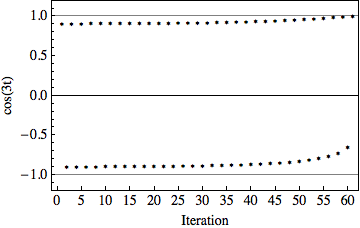 This is for $\omega = 3$, $g= 1.75$ and $b = 0.8$. This shows that as time progresses the crossing times begin to grow so that after some time there is no longer a root. Perhaps, and this is a mistake which I apologise for, this instability is brought about by the fact that I am solving a slightly different system in which $\cos\omega t$ is replaced by $\cos(\omega t-\phi)$, with $\phi = \text{atan}(\omega)$ (I thought this would go away by rescaling $t$ appropriately).

Some of this overlaps with the answer by Jayesh Badwaik, but it does not hurt to see two people's perspective.

Concerning the sequence $t_k$, let's begin with a simple observation based on Rolle's theorem: there exists $t$ strictly between $t_k$ and $t_{k+1}$ where the derivative of $e^t(g\cos\omega t\pm b)$ vanishes. This means $g\cos\omega t-g\omega \sin\omega t\pm b=0$. If $g\sqrt{1+\omega^2}\le b$, the derivative never changes its sign; therefore in this case you don't even have $t_1$. If $g\sqrt{1+\omega^2}> b$, there are infinitely many solutions which form a periodic pattern. This does not tell us that the sequence $t_k$ is infinite, but if it is infinite, then it grows at least linearly: $t_k\ge Ak+B$.

When $g>b$, the function $e^t(g\cos\omega t\pm b)$ is oscillating with increasing amplitude, roughly between $\pm g e^t$. It is not hard to see that in this case there is always $t_{k+1} \in (t_k, t_k+2\pi/\omega]$. So, the sequence $t_k$ is infinite and it grows at linear rate. Notice that this contradicts your observation that the sequence stops with $b=0.8$ and $g=1.75$. I suspect that you ran into overflow issues due to the exponential growth of the function.

The case $g=b$ is about the same as $g>b$: here the function does not change sign, but it returns to zero infinitely often. The sequence $t_k$ is infinite and grows at linear rate.

In the interval $g< b< g\sqrt{1+\omega^2}$ the elementary observations above do not suffice.

Let's step back from the case-by-case analysis and try to see more structure. Let $F(t)=e^t(g\cos\omega t+ b)$. The equation $F(t_{k+1})=F(t_k)$ is invariant under adding an integer multiple of $2\pi/\omega$ to both $t_k,t_{k+1}$. So, we can choose the starting point $t_0$ to be in an interval of length $2\pi/\omega$ of our choice: it appears to be convenient to take the interval between two consecutive local minima of $F$. We can also choose to subtract a multiple of $2\pi/\omega$ from subsequent points $t_k$ to avoid the exponential growth and associated numerical issues.

This process continues for as long as the original process with $t_k$, and $s_k$ agrees with $t_k$ up to an integer multiple of $\pi/\omega$.

You can get more information by following the algorithm yourself with a printout of the graph of $F$. From the starting point, draw horizontal line to the right until it crosses the graph again (if it does not, the game is over). Then move the point $\pi/\omega$ to the left, adjust the vertical coordinate so that it lies on the graph of $F$, and repeat. After a few tries you should get a pretty good idea of how this dynamical system behaves.

First of all, you can divide both sides by c. So let's assume this was done, and our equation is $g\cos\omega t+b = \exp(-t)$. This means we are looking for intersections between the exponential curve and a cosine wave. In general, there may be many intersections, in fact there are infinitely many when $ g>b$. Are all of these solutions relevant to your task, or is there a preferred one?

If $g<b$, we have an upper and lower bounds for solutions, namely $-\log(b\pm g)$. The number $-\log b$ looks like a good starting point for Newton's method, which can indeed be written in the form of a series.

I might be able to say more if you can clarify a) what to do with nonunique solutions, and b) if you know anything about the relative size of the constants involved. For example, is b much larger than g? Etc.

This was the easiest way to calculate approximate formula. But I doubt, it is much useful if you want to apply further analytical tools mainly because of floor function.

I am hoping one can apply a similar procedure using some sort of transformation and back, I am not sure though. Will try to get back to you on it.

Taking Leonid's $c=1$ I would try to divide this problem into two regimes.

The only region where it will be hard to get an approximation will be the $\omega \sim 1 $ regime. One could divide things into quadrants and make conditions on which phase of $\omega t$ the intersection is likely to happen. This is work, might be faster to use your non-linear root finding solutions for the transition region, plot it and fit something to the solution (a quick polynomial for example).

Case 3 has to be changed in a similar way.

Not the answer you're looking for? Browse other questions tagged numerical-methods approximation dynamical-systems roots or ask your own question.