How to determine the Supremum and Infimum in a Hasse Doagram?

In order to find the supremum or infimum of a Hasse diagram we follow the outgoing lines from the elements up for supremum or down for infimum until the lines meet each other.

My question is, do we have to go only straight or are we allowed to turn left or right until we reach the meeting point. In this diagram for example I know the Sup ({c,d}) = 1 but what about the Inf? Is the Inf ( {c,d} ) = 0 or doesn't it exists? 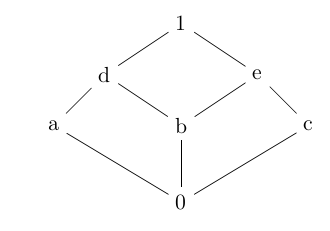 Not the answer you're looking for? Browse other questions tagged lattice-orders or ask your own question.

2
How to deal with Ideals generation from a Poset of sets including the empty set?
2
Lattice of interval
0
Is the standard bounded metric $\overline d(x,y) = \min\{d(x,y), 1\}$ well defined in terms of meet operator on metric topology
1
Lattice diagram
2
Is every subset of a lattice a lattice?
1
Confusion about definition of topology
0
A question about the supremum and infimum in a Banach lattice