What is the probability that Sieve(k) returns true as a function of k ? What is the limit of this probability as k goes to infinity (if it has one) ?

This is difficult to do exactly because the probabilities are all correlated: a small number of small "primes" will lead to more big "primes", and vice versa. The answer at stackoverflow ignores these correlations, yet gets quite close to the value for $k=1000$ ($0.1227$ instead of $0.1199\pm0.0003$ as determined by computer simulation), so it seems it's a reasonable approximation to model the probabilities as independent.

Doing so actually yields a much simpler recursion than the one used in the stackoverflow answer: $k+1$ has exactly the same chances of getting marked "composite" as $k$, and if $k$ is "prime" it has an additional chance during the $k$-th iteration, with probability $1/k$. Thus the probabilities $p_k$ of $k$ being "prime" satisfy the recursion relation

We can rewrite this as

and approximate it by a differential equation:

whose general solution is

with an arbitrary constant $c$, which is influenced by the approximation errors for small $k$. From $p_{1000}\approx0.12$ we get $c\approx1.43$, so a good approximation is given by

Here's a plot of the values up to $p_{1000}$, which shows rather satisfactory agreement (red: model, green: simulations): 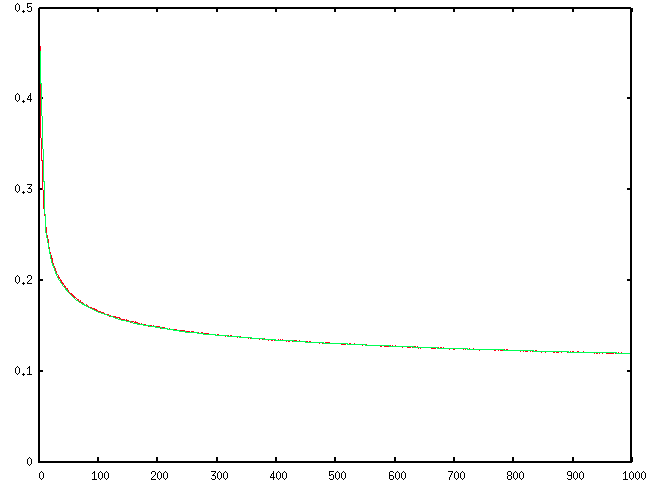 Not the answer you're looking for? Browse other questions tagged probability number-theory algorithms or ask your own question.

2
Is the following inequality correct and how to prove it?

20
Quadratic sieve algorithm
0
Help Specify possible definitions for this Boolean Function
3
"Practical" Sieve of Eratosthenes from "Primes Numbers - A Computational Perspective"
1
Generate Sieve of Eratosthenes without "sieve" (generate prime set in interval)
0
How to generate a bounded, random value where the inputs are the "mean" and the "amount of randomness"?
0
Model checking for logical consequence in propositional logic