Can the inscribed angle theorem be generalized to solid angles in 3D? And beyond to n-dimensional space?

The "inscribed angle theorem" is a common 2-dimensional plane geometry fact. It states that for a circle the angle formed between any two points on the circumference with the center is twice the angle formed by those two points with any other point on the circumference. I will not elaborate on a proof or further details here, but instead provide a link and image from the wikipedia page on this topic, where the basic theorem is proved.

IMAGE: The inscribed angle θ is half of the central angle 2θ that subtends the same arc on the circle (magenta).

My question is whether this simple 2D geometric concept can be adapted to solid angles in 3D? And perhaps beyond to n dimensions?

The 2D case dealt with 3 points on the circumference of a circle (2 that defined the arc, and the 3rd point that formed the angle that was half the angle at the center). In 3D, imagine a sphere rather than a circle, and consider 4 points instead of 3. Let 3 of the 4 points form the base of a tetrahedron, then consider two distinct cases.

The answer to your question is no. The inscribed angle theorem does not work for inscribed solid angles in a sphere.

To see why, I will start by stating an equivalent version of the inscribed angle theorem. Consider the following figure. 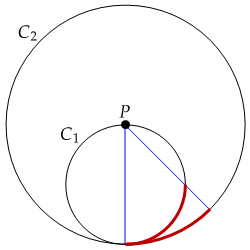 This figure shows the point projection of a circle $C_1$ onto a circle $C_2$ of twice the radius. The projection point $P$ lies on the circumference of $C_1$ and is the center of $C_2$. In this situation, the inscribed angle theorem can be stated as follows:

Note that this projection maps $C_1$ onto the lower half of $C_2$. The figure above shows two red arcs that have the same length under this projection.

Since doubling the radius of a sphere quadruples its area, this is the same as asking whether a solid inscribed angle is equal to one quarter of the corresponding central angle.

Note that this is certainly true infinitesimally near the point of tangency. That is, a solid inscribed angle that lies within an $\epsilon$-neighborhood of a diameter of a sphere is approximately 1/4 of the corresponding solid central angle.

Practically speaking, what this means is that, given a region $R$ on a sphere and a point $P$ on the sphere that does not lie in $R$, the ratio $$ \frac{\text{central solid angle for }R}{\text{inscribed solid angle from }P\text{ to }R} $$ is close to $4$ when $R$ is small and diametrically opposite the point $P$, but approaches infinity when $R$ is small and very close to $P$. More specifically, the above considerations show that this ratio is the average value over $R$ of $4\csc(\phi/2)$, where $\phi$ is the central angle from $P$ to a point in $R$.