The inverse, using some basic algebraic rearranging, can be said to be:

As evident, the domain of this function seems to be all real numbers.

However, a property of functions states that,

Firstly, the inverse needs to take any output from $f(x)$ and return the original value. As such values outside that output (the original's range) should not be part of the inverse's input (domain).

Secondly you've rearranged incorrectly and your fraction is upside down.

Lastly, there are two cases you need to consider. Either $k>0$ or $k<0$. We can ignore the $k=0$ case as this does not have an inverse function.

The domain of $f(x)$ is $x\geq0$ and so we can determine that the range is $y\geq0$. Hence the domain of the inverse should be $x>0$. We have to ignore the rest of the potential domain ($x<0$, show with dotted line) as these are not possible outputs from $f(x)$. 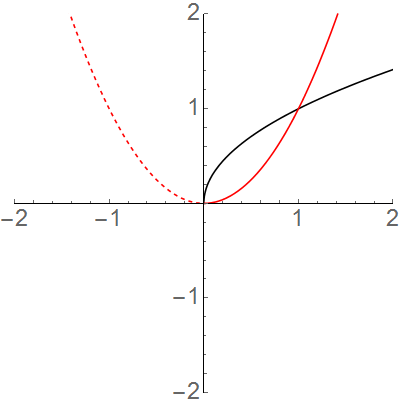 Basically the same but with signs reverse. The domain of $f(x)$ is $x\geq0$ and so we can determine that the range is $y\leq0$. Hence the domain of the inverse should be $x\leq0$. We have to ignore the rest of the potential domain ($x>0$, show with dotted line) as these are not possible outputs from $f(x)$. 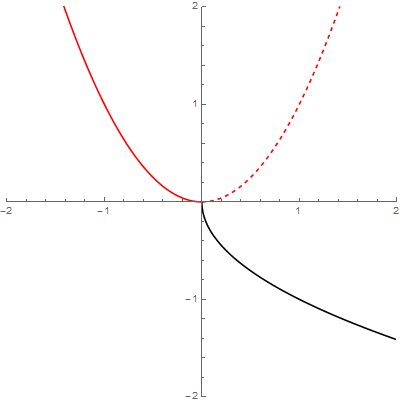 The inverse of the function $f(x)=kx^{\frac 12}$ isn't the entire parabola, just part of it. In order to take the inverse of a function, it has to be one-to-one. When you algebraically find the inverse, keep in mind that what you have is the positive root of $x$, not the negative.

Just to emphasize what others are saying,

It just so happens that $[0,\infty)$ is a subset of $\mathbb{R}$ and when you find an explicit formula for the inverse you need to restrict the domain of the function. That is, the actual problem you are trying to solve is this

First, you don't place any restrictions on $k$. This will turn out to matter.

Second, "$f(x) = k x^{\frac{1}{2}}$" is not a function. A function presented this way is a domain and a rule/formula/expression for converting elements of the domain into elements of the image. When the domain is missing, it is normally understood to be the largest subset of whatever set makes sense given the current subject of discourse. You seem to indicate that the real numbers is that set. In this case, the domain of $f(x)$ is $x \geq 0$. (Because there are no challenges to taking square roots of zero and positive numbers.) If $k=0$, we could conceivably argue that the domain is all of the reals, but that will fail to be interesting in the next step, so we set that aside.

Not the answer you're looking for? Browse other questions tagged functions or ask your own question.